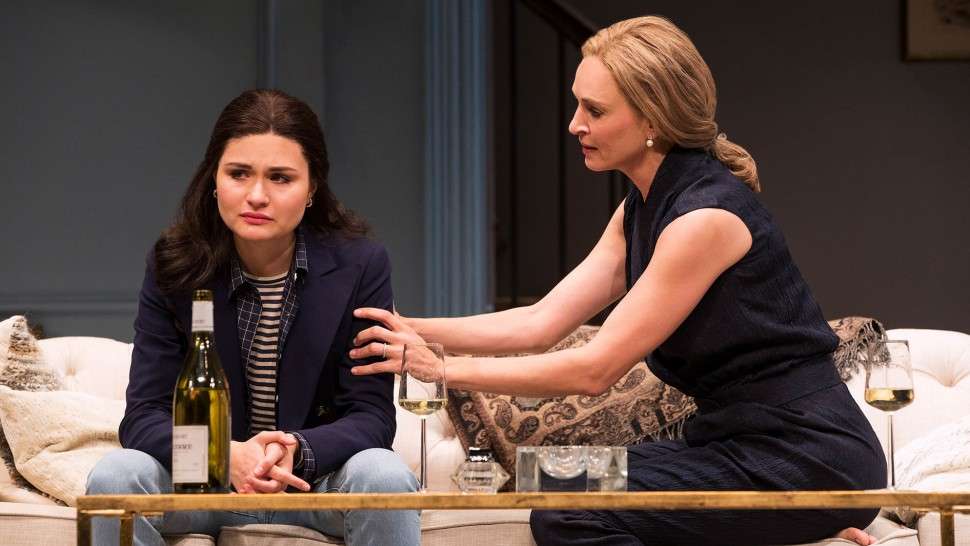 John Lithgow has become an American institution thanks to his TV, film and stage appearances. His status is so high that the actor can bring a solo show Stories by Heart, to a Broadway theatre for a three-month run.

The highlights are tales of his father Arthur Lithgow and the difficulty of making ends meet while creating theatre in Ohio. The family’s love of each other and the stage shines through in an evening that primarily features Lithgow reading and acting without props two favourite short stories from childhood, Haircut by Ring Lardner and Uncle Freddie Flits By by PG Wodehouse. The highlights of the evening were undoubtedly the family stories.

It is always cheering to see a stock Broadway musical, particularly bearing in mind the likelihood that a London transfer will happen in the fullness of time. Waitress started life as a movie and has run for over a year on stage, thanks in part to star casting. At the performance under review, popular singer songwriter Jason Mraz was in the cast, soon to be joined for yet another appearance in the title role by the writer of the music and lyrics, Sara Bareilles.

In the meantime, Betsy Wolfe plays Jenna, a waitress but also creative pie maker in a small town in the American South. Beset by a disastrous marriage to a violent loser, she finds hope and love in the person off her gynaecologist, played by Mraz.

However, the star of the evening turned out to be Christopher Fitzgerald playing a geeky tax auditor who dates and then marries one of Jenna’s colleagues.

The music is perky and the storyline even more so, in the kind of feel good show that (without wishing to appear sexist) is likely to prove most popular with hen parties.

The Parisian Woman comes from the pen of the man behind the US TV version of House of Cards and the movie The Ides of March. Beau Willimon has taken inspiration from Henri Becque’s La Parisienne in creating a political drama that is very much of the Trump era.

One of the pleasures of this visit was a trip to the newly restored Hudson Theatre, which had been dark for almost 50 years and now welcomed a cast led by Uma Thurman making a very capable Broadway debut, opposite Josh Lucas and Hamilton favourite Philippa Soo.

The fiendish twists and turns of the story were quite convincing and the spotlight that it shone on government today made the evening worthwhile.

Mint Theatre Company specialises in rediscovering plays of the past, with significant input from the United Kingdom. Their lovely revival of Stanley Houghton’s Hindle Wakes might have been set in Lancashire but you wouldn’t have known it from the wide variety of accents, everything from London and Yorkshire to the Wild West.

That apart, this is an exceptional off-Broadway production at Theatre Row, featuring a glorious symbolic set and good performances in a play written before the First World War about love, lust and marriage.

The Labute New Theater Festival took place at 59E59, the home of Brits Off-Broadway. This programme of three short plays had come into town after opening at the festival in St Louis and collectively took on many of the most significant issues of the day.

Hate Crime by Neil Labute was a mysterious, Pinteresque drama about a potential assassination in the gay community.

Winter Break by James Haigney focused on the pressures a family feels when its much loved student daughter decides to become a Sufi Muslim and travel to Turkey.

Finally, Percentage America by Carter W. Lewis was a whimsical comedy about the aftermath of a computer date during which both parties lied like mad. This persuaded them to try an exercise in honesty, based on attempting to get to the bottom of a piece of fake news regarding a young girl who had apparently invaded the White House lawn with evil in mind.

While I saw a preview of The Homecoming Queen by Ngozi Anyanwu presented by Atlantic Stage Company too early to review, this piece about the cultural divide between the United States and Nigeria was intriguing.

It featured a highly Americanised woman returning home after a 15 year absence during which her perspective had changed so much that Africa looked alien. Her interactions and discoveries provide an enjoyable evening that will almost certainly have reached its peak by opening night.

A trip to the Met is always a joy. This year’s new production of Tosca by Sir Norman McVicar was beset by difficulties, losing to conductors and all three leads prior to opening. Incredibly, given these difficulties and the appearance of a soprano making her only appearance in the season, it was a triumph for all concerned.

Combining three sets that were staggering even by Met standards with outstanding performances from that soprano, Jennifer Rowley, Vittorio Grigolo and Željko Lučić made for a great night, even allowing for a delay before the final act resulting from set problems. For those that are interested, the performance on 27 January is to be broadcast live in cinemas around the world.

In passing, readers might be interested or amused to note that Times Square now has its own NFL Experience, which allows visitors to get a feel for what it must be like to play American Football at the top level. This is of particular note to those in the theatre industry since the project is co-run and promoted by Cirque du Soleil.

Reviews of all shows mentioned and interviews with ObieAwards Chair and Village Voice critic Michael Feingold and Ngozi Anyanwu are available on British Theatre Guide http://www.britishtheatreguide.info/.