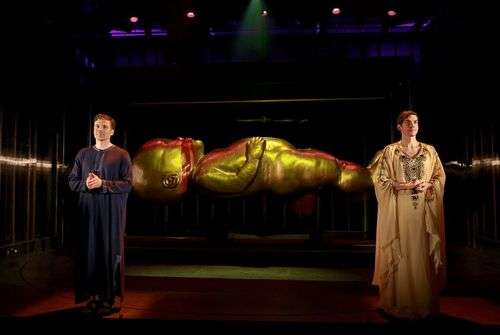 A 12 day stay in New York presented the perfect opportunity to sample the theatre scene, everything from the Metropolitan Opera House to off-off-Broadway spaces with only around 60 seats.

Given the time of year, it was impossible to get tickets for some of the most sought-after shows. Even the lottery did not yield a ticket for Springsteen on Broadway, although the unlucky were offered a chance of returns at regular prices ranging between $200 and $875.

The chance to see a couple of transferred from London was irresistible. The Play That Goes Wrong completed its fairy-tale journey, which started at the Old Red Lion in Islington and in Edinburgh, prior to a London run that could last forever and the potential for similar success on Broadway.

The takeover American cast still contains one British actor but maintains the spirit and verve of the original with ease. While the backstage scenes have moved firmly across the Atlantic, the onstage drama remains quaintly British, with the comedy appealing just as much to a New York audience as it had in London.

Equally unlikely is the transatlantic success of Tooting Arts Club. Their version of Sweeney Todd: The Demon Barber of Fleet Street set in Harrington’s Pie and Mash Shop on their local High Street first moved to a venue beneath Shaftesbury Avenue, before the set was lovingly recreated at Barrow Street Theatre in Greenwich Village.

The run has already extended for over a year and, with a cast currently led by two Broadway favourites, Carolee Carmelo and Hugh Panaro, is still wowing punters happy to pay $110 for off-Broadway tickets (plus $22.50 for pie and mash).

The intimacy of Bill Buckhurst’s production proved a great attraction in London and American audiences have been lapping up the opportunity to get up close and personal with the murderous. This version of Stephen Sondheim’s much-loved musical manages to combine the grimness of Victorian London in murderous times with black humour and some lovely singing, with Jake Boyd playing Anthony and Monet Sabel as Johanna particularly memorable.

One of the highlights of the trip also occurred off-Broadway with the premiere at Playwrights Horizons on 42nd Street of Robert O’Hara’s Mankind.

This piece has much in common with The Divide by Alan Ayckbourn, which is heading for the Old Vic, in that it envisions a world in which the balance between genders has gone awry. In this case, no female has been born for 100 years or seen for around 50.

While some of the plotting requires additional work, O’Hara who directs his own piece, has created a highly thoughtful and inventive meditation on the world today, as considered from way into the future. Both sets and costumes were surprisingly lavish, which partly explains why off-Broadway productions have the kind of budgets that London producers can only dream of.

The first half of January is the time to visit the Public to sample works in their Under the Radar Festival. While much smaller in scale, it has much of the novelty and breadth of a mini Edinburgh Fringe, although almost everything on show is challenging.

How to Be a Rock Critic was a labour of love created by Jessica Blank and Eric Jensen, best known as the team behind The Exonerated.

Their new piece, directed by Ms Blank and performed by Jensen, is a wild biographical portrait of rock critic Lester Bangs. As depicted on stage, the character played by Philip Seymour Hoffman in Almost Famous is in thrall to rock music in a way that few of the uninitiated could hope to understand.

He also comes out as childish, lovable and, by the end of the piece, far better informed about the limitations of the kind of heroes who are best witnessed at long range, where the warts are barely distinguishable.

The Gates: An Evening of Stories with Adam Gopnik turned out to be absolutely charming. For those from this side of the Atlantic, Adam Gopnik is a journalist who made his name writing for The New Yorker.

For around 90 minutes, the writer wittily tells his own family story from the days when his Jewish grandparents immigrated to New York via Ellis Island, through periods in Montréal and Philadelphia to a long-term love affair with the Big Apple.

Cleverly recreating the 9’ x 11’ apartment that he and his wife Martha shared for 3½ years on arrival, his story of relatively ordinary folk is absolutely engrossing.

Re-Member by British performance artist Dickie Beau is billed as a riff on Hamlet but might more realistically be viewed as a eulogy to the late Ian Charleson who was in the later stages of succumbing to AIDS before taking on the role.

While extracts from an interview with Sir John Gielgud give an idea of what it is like to play the Dane, most of the time is taken up with interviews featuring Sean Mathias, Sir Ian McKellen and Sir Richard Eyre, relating to Charleson’s mesmeric performance after taking over from Daniel Day Lewis in the most extreme circumstances.

The style of the production will either drive you wild or mad, since the performer lip syncs to the words of the great and the good (as well as some pretty ordinary folk) and rearranges knickknacks on stage, drawing attention away from the important messages, for reasons that he will be able to explain far better than this critic.