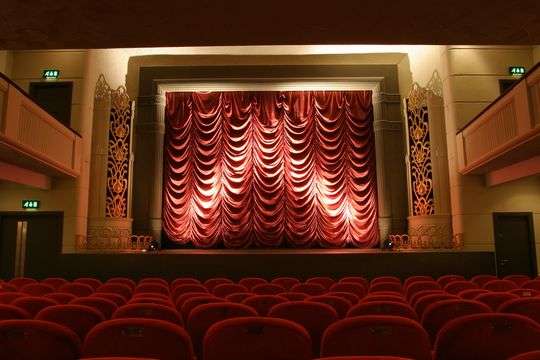 Nine Hibbin, who joined the Circle in 1960, was director of the Tyneside Cinema, one of the glories of the North East with its Persian and art deco designs, from 1976 to 1979 after it had become a film theatre under the BFI. She is one of many celebrated in Michael Chapman’s Come and See, the story of the cinema, written to celebrate its 75th anniversary. Hibben was critic of both the Daily Worker and The Lady and apparently did not modify her approach to films to fit either publication.

Nina Hibbin with The Shadows at a press reception in 1963 for Summer Holiday. © Sally Hibbin

Derek Malcolm remembers her turning up for screenings on a motor bike and believes she deserves a place in the history of post-war British cinema  because of the way she campaigned to persuade British distributors to screen films she believed in, especially from Eastern Europe, as well the likes of  Ken Loach’s Kes, and what was in her day called third-world cinema. As for her opinions, a trenchant lady, she pulled no punches.

Of Michael Powell’s Peeping Tom she wrote: “From its slumbering, mildly depraved salacioius beginnings to its appallingly masochistic and depraved climax it is wholly evil.” As for Mike Hodges’ Get Carter she said: “With confidence, cynicism and considerable skill, Hodges plays upon all those complex and suspect elements which go up to make the English tough-guy image. He has made a film which is rather sick.”

Peter Ferres, the BFI representative on the trustees, believed she was the best thing that had ever happened to the Tyneside Cinema . “If she hadn’t come along at that time, when the cinema was so fragile, if she hadn’t pushed that populist approach, the cinema would possibly not exist today,” he says.

Nina had not trained as a programmer, but had a natural feeling for what people would come to see as her audience figures proved, although her choices did confuse the local critics at first. Writing in the Journal at the end of her first season David Durman decried her populist touch in screening films that could be found in commercial cinemas, while Phil Penfold in the Chronicle suggested the cinema might have more success if its programming went beyond what he called “films about tractor collectives in the Ukraine.” Nina, however, might have reflected that it showed she was getting it about right.

The last word should go to Ray Reed, her projectionist. “We found we had things in common,” he says. “She was a Communist and I read the Morning Star. We went drinking together – there was no them-and-us with her. She smoked roll-ups with a very strong tobacco. She was up-front and extrovert, knew what she wanted – and didn’t piss about. Eric (Her husband) was the opposite – so laid back, he almost fell over. They bought a house in Sheffield and got me to do the re-wiring. They liked parties – we had some good times there.

“She was a tough old bitch, but straight as a die. I liked her.”

Nina, who died aged 81 in 2004, went on to work in the arts in the North East for many years. She also played a major part in the choice of her successor at the cinema – Sheila Whitaker, another dame formidable. Her daughter is Sally Hibbin, the film producer.