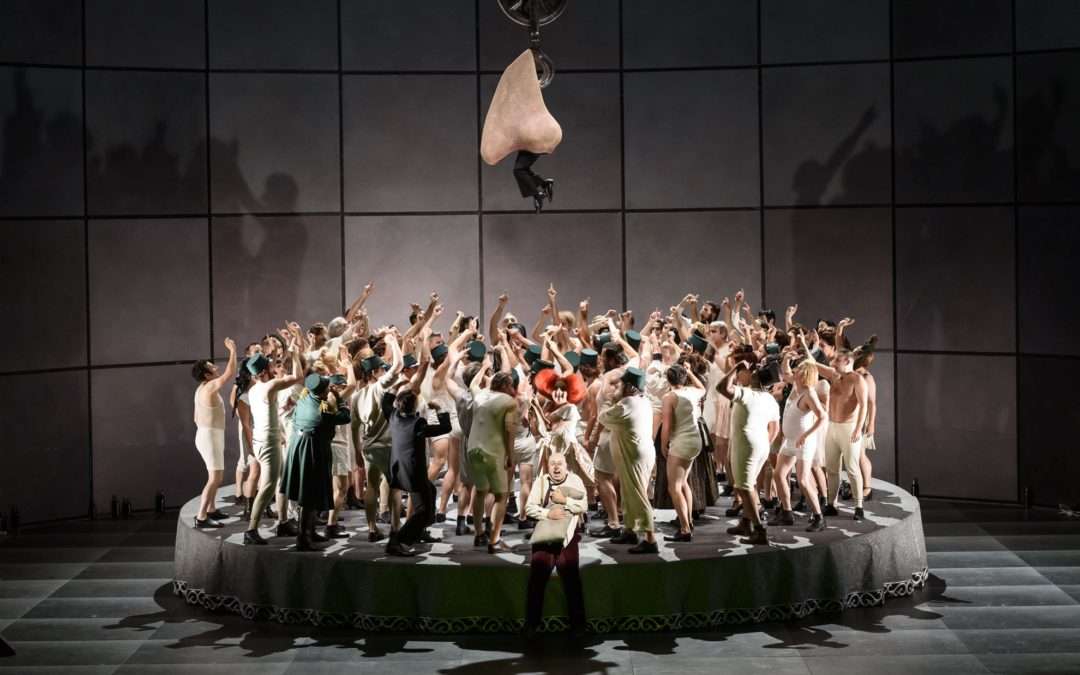 "A rollercoaster evening": The Nose at the Royal Opera House. (C) Bill Cooper

For Barrie Kosky’s Royal Opera debut you could only expect the unexpected. The Australian director, head of Berlin’s Komische Oper, picked a work that has never before been staged at Covent Garden. It’s an extravagant, radical and often very loud take on Gogol’s surreal story in which Platon Kuzmich Kovalyov wakes up to find his nose has gone walkabout and is living the high life in St Petersburg. Premiered in 1930, but dreamed up three years earlier when the composer was 21, it’s so off-the-wall and tonally anarchic that it could almost have been written three decades later.

The young Shostakovich, who knew Berg’s Wozzeck (and perhaps wanted to prove it), dolloped his opera with ample orchestral episodes and cast it with a myriad short roles, many little more than vignettes; the unfortunate Kovalyov and a couple of other key figures are the only major roles.

The precocious Shostakovich throws every bit of his arsenal at Gogol’s tale and the high-octane inventiveness is enormous fun, at least for a while.  But you can’t help feeling he needed a good editor. His Nose is rather congested: some of the word-setting is too extended for the verbal exchanges to be punchy, and dramatically, too, a few cuts would sharpen things up. But the seeds of his future stylistic trademarks are there: drone basses with lonely, plangent woodwind solos above, manic William Tell-type rhythms, a free-wheeling violin solo (bravo to orchestra leader Peter Manning), and much besides.

Kosky’s masterstroke is the Nose itself: a young teenager from theatre school, Harrison Noble (Ilan Galkoff in other performances), clad in a giant schnozz, with bare legs and tap shoes. At the halfway point (the show is two hours with no interval) he leads a team of similarly costumed dancers in a rip-roaring routine.

Dance is also a fine way to fill those orchestral episodes, and each one is different, often dizzying, many times delicious. Who else would think of whirling tables around the stage powered by tricycles? And the various appearances of “Nosey” – whether an apparent lynching or a tiny specimen ambling forward under the bed – are delivered with a light touch enhanced by all manner of ironic detail.

Not for nothing has Kosky (going against his own policy at the Komische Oper, where he prefers opera in its original language) plumped for English rather than Russian; the earthy and up-to-date new translation is by David Pountney. It’s helpful to understand it in real time as it careers by with reference piling on reference: Cabaret, Yiddish theatre, Freudian association, Jewish jokes, Russian legend, this Nose knows it all. “Oy gevalt! The 8.23 to Kitezh has been cancelled – they couldn’t find it…”

If you want to read symbolism into it, help yourself. Is The Nose about keeping people in their hierarchical place, or about losing another person who’s part of you, or a euphemism for fear of losing another body part, with everything that implies? Or is it just pre-Python surreal nonsense? Maybe all, possibly none: Kosky lets the options flit by in front of our, er, noses, and leaves the decision to us.

Musically, The Nose is noisy. Very noisy. The percussion section has a field-day. But conductor Ingo Metzmacher steers a strong, steady ship, keeping the balance excellent and supporting the bursting-at-seams cast at every turn. As Kovalyov, Martin Winkler holds the stage with effortless charisma, emits numerous types of sound an opera singer wouldn’t normally have to make, and even manages to make this unappealing character occasionally touching. Sir John Tomlinson is a ferocious and earthy presence, making the most of his multiple incarnations as Barber, Newspaper Clerk and Doctor.

As Ivan, Kovalyov’s high-noted servant, and in some other fleeting roles, tenor Wolfgang Ablinger-Sperrhacke is splendid; if only there were more for him to get his teeth into. Likewise Susan Bickley, who pops in to portray a louche Old Countess for a few minutes. The wonderful Helene Schneiderman as Pelageya, who wants to marry off her dolly-mix daughter (Ailish Tynan) to Kovalyov, happily has a slightly more substantial role. The ROH chorus sounds splendid.

It’s a roller-coaster evening, terrifically clever. Yet as a piece of music, The Nose left me a little cold.