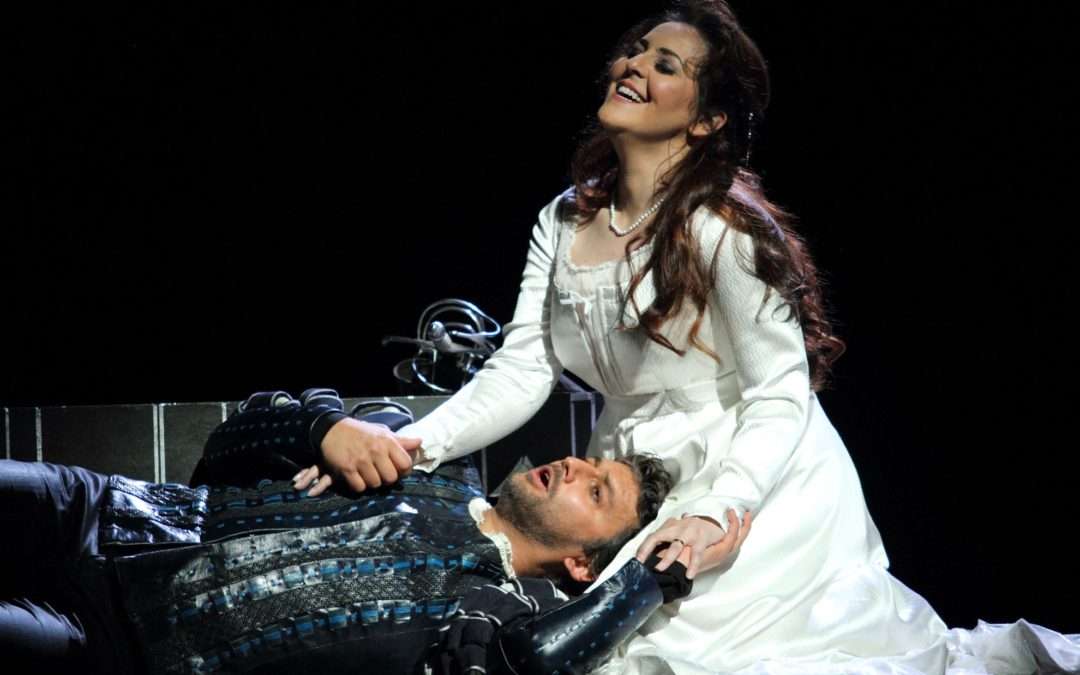 The Royal Opera’s new production of Giuseppe Verdi’s Otello was without doubt the hottest ticket of this season, thanks to Jonas Kaufmann’s debut in the title role. Keith Warner’s new staging is the third here since the Second World War, Elijah Moshinsky’s having lasted 30 years and its predecessor – with memorably beautiful sets and costumes by Georges Wakhevitch – about as long. Warner’s set designer Boris Kudlička adopts a cinematic fluency, with moving walls and some naturalistic elements. The scenery shifts more expressively than the crowds after the opening storm quietens and fires are lit. In the fight between Cassio and Roderigo tumblers turn somersaults to add to the business, if not to the realism. A ship delivers Otello to harbour at the back of the stage, though serried ranks of chorus are looking at us and into the auditorium. At the end the bedroom is framed with a bright white line of light. It is a weirdly-shaped room anyway with an annexe and doors and two levels, including a broken plaster lion’s head on an upper space.

Other than the bed, furniture is minimal, apart from a low table (in Otello’s scenes with Iago) on which are set some model ships for Otello’s naval planning, all later swept to the ground in rage. A high small platform juts out from the right-hand wall high up in the first scene to be occupied by Desdemona, from which later Otello can observe Iago’s manipulative interrogation of Cassio. But Bruno Poet’s lighting does achieve exactly the right romantic atmosphere for the great duet at the end of act one.

Pappano’s conducting is fluent and hyper-energized, efficient as always but without any specially fresh musical taste or perception. The chorus in the storm is immensely loud and improbably marshalled. Like the scenery the effect is mechanical rather than humanly convincing. You might think Verdi liked disciplined church choirs more than theatre. In effect the whole performance is rather self-consciously full-frontal, instead of finding an imaginative freedom and expressiveness. But that is where Kaufmann’s lack of the strange mix of vulnerability and authority that characterises Otello really matters. Of course the voice, beautiful and exciting though it is, is no force of nature the way James McCracken and Jon Vickers (and Dimiter Uzunov my first Otello outdoors in Venice on the steps of the Doge’s palace) could be. Domingo, especially when conducted in the final showing of the Wakhevitch sets by Carlos Kleiber, had just the right authority and perverse meanness to respond desperately to the idea of Desdemona’s betrayal.

But what Kaufmann especially seems to miss or not get is the childish sense of possession, the destabilising sentimentality that cohabits in Verdi’s characterisation along with the authority and brute strength. Vickers caught Otello’s emotion and frightening vulnerability perfectly. And so did Gregory Kunde (when I saw him in 2014 in Turin) who is also doing the role in this new production and very likely better. Kaufmann can be thrilling on stage and I love his somewhat baritonal glowing tenor. But he is too bloke-ish, not animal enough for this role – there is no streak of madness for Marco Vratogna’s devilish Iago to draw on. Kaufmann is just cold and normal. At a time when An Octoroon is running elsewhere in London (with a fine black actor wearing white make-up as a slave owner), it makes little sense not to darken Kaufmann’s skin a bit extra – into a zone of Moorish skin-tone.

Maria Agresta’s Desdemona sings beautifully and very warmly. The whole production is costumed in period with impeccable style and handsomeness by Kaspar Glarner. Desdemona’s dresses are ravishing, as is the headdress worn by Kai Rüütel’s fine Emilia. Frédéric Antoun is the best Cassio I have ever heard here. In Sung Sim’s Lodovico is excellent. Warner has supplied a production that largely makes good sense and can be revived (and revised) well. It possesses a noble coherence and draws effectively on the tradition, but could have been more carefully naturalistic to general benefit.