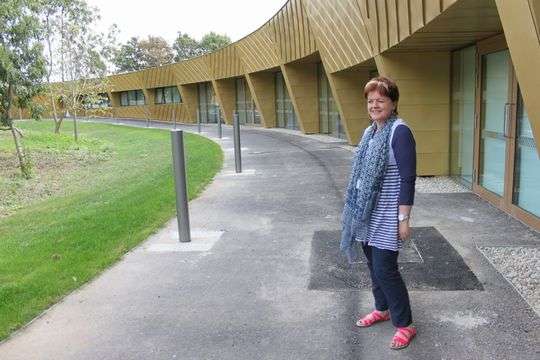 Kath Wood and firstsite, which opened in Colchester on September 23

There is a crucial counterpoint about Colchester’s £28m new contemporary art gallery and history, which opened on September 23. Even its title, firstsite (all in contemporary lower case), hinges the newest contemporary to the deep past of the oldest recorded town in the country.

Ancient remains have even demanded special inspiration from the architect, the Uruguay-born Rafael Viñoly: he could not dig any foundations and had to create a platform above the 2nd century Roman remains beneat.

It was Viñoly who insisted on creating firstsite precisely on this historic spot, with the curve of the building echoing the curve of the old Roman wall whose line the gallery nestles in. The building itself, which has to be content with the local nickname of “The Golden Banana”, is clad in gold-coloured copper reminiscent of the jewellery worn by the Ancient Britons who lived here before the Romans – as Camulodunon at the time of Christ it was the power-base for the king Shakespeare called Cymbeline.

The new gallery has no permanent collections, and the only resident work of art is the Berryfield Roman Mosaic, dating from about 200AD, found in 1923 among the remains of a Roman townhouse, removed to Colchester Castle, but now restored and replaced a foot or so from where it originally sat. It is a constant reminder not only of the history but of the fact that, whatever you come to see, art has always been here.

The opening is the culmination of a 17 year odyssey for Kath Wood, firstsite’s director, who has taken the project through local opposition, architectural crises, archaeological strictures, financial quests, delays  – it should have opened in 2008 and cost £20m – and a constantly, it seemed, changing project framework. Now, she hopes, everything is settled. “Reinventing yourself is quite exciting” she says “but can be quite tiring for an organisation as well. We’ve responded to different parameters, but it’s hard to get out of the habit of change. You have to work at it”.

Katherine Wood is the daughter of the TV producer Annie Wood who, with Kath’s father Chris, founded Ragdoll Productions which brought Teletubbies and Night Garden to millions. She was exhibitions officer at the Arnolfini in Bristol when she got the job of running a well established gallery in a town she didn’t know, for an organisation called the Colchester and District Visual Arts Trust – “The acronym was Cadvat, not good” she says – with a view to creating a new one on a site that hadn’t been decided.

There was much more preparation to be done before firstsite was any more than an idea in a visionary young curator’s mind. There had been a feasibility study in the late 80s and in 1994, the year Wood was appointed director of the Minories Gallery, the National Lottery arrived to spur planning.

“Colchester has quite a visual arts heritage” Wood explains. “Apart from the Constable/Gainsborough legacy, the council had invested a lot in cultural activity – the museum, the theatre, the arts centre – and the  Minories had a fantastic reputation going since the late 50s It’s a beautiful Georgian House, but when you get ten schoolchildren together it’s not comfortable. Our experiences there have informed firstsite, the domestic setting, the longer stay… We learned about audience patterning.”

With encouragement from Arts Council East, the project was got properly under way in 1999, the site was identified, an open competition found the architect, but while the local authority was behind the scheme there was formidable local resistance to  – to new developments, to contemporary art, to this new building, and Colchester being on the cusp of two counties there was a geographical divide to be bridged as well. It was a difficult course to steer, between the misinformation and false assumptions, exacerbated by delays.

Since 2008 Wood and her growing staff – three to start with, now 28 – had no permanent base, and she had to turn homelessness to an advantage. She developed Gallery Without Walls, a programme of travelling exhibitions, workshops and school visits which not only took the firstsite project into the community but gave more ideas about audience development and exhibition management.

At the same time she attracted important artists, local, regional, national and international, which has developed her reputation among artists and collections. Her education programme is taught by a team of associate artists. She has mounted site-specific shows for artists like Nathan Coley and Ivan & Heather Morison, and arranged for Mark Neville to be deployed to Afghanistan as deployment as the artist with 16 Air Assault Brigade, the locally-based army unit with which she has forged a friendship.  She brought Antony Gormley’s Field for the British Isles and put it in a disused department store. In a Georgian house now owned by the gallery in Queen Street she established a creative hub for a mix of young artists and cultural entrepreneurs, and around it is growing a cultural quarter.

Wood developed a series of partnerships, with the parental council; with Essex University which, it turns out, possesses a matchless Latin American visual art collection; with the army; the Arts Council; with local businesses, charitable foundations and trusts, and with individuals.

And there was the development of the building, a building with no straight lines, and working with a virtuoso architect is a craft. “Viñoly is also a concert pianist, you know, so the concept was really about building a new cultural social space which has several functions, and playing a little bit with hierarchy of those functions, where those things butt up against eachother” she says.

She looked at the Tate Modern effect, how that development had become so much more than an art gallery as soon as it opened (firstsite is already part of the Plus Tate group of galleries across the country). They examined the commerciality of the place and how that could sit with the primary purpose of drawing attention to art and to the artists of the region. Central is the lecture theatre and around it are galleries served by light from north and south of the buildings, education rooms, workshops, and a space for the university’s Latin American collection whose changing exhibitions will be curated by faculty curators.

They also had to be aware, as Viñoly was in part, of the histories – the gallery is in the grounds of the handsome Georgian home of a prosperous merchant tailor, George Wegg, which has now been bought by a restaurateur with whom Wood has developed a cordial relationship. Viñoly wanted to demolish a folly Wegg had built on ground now belonging to the gallery, but Wood over-ruled him. It was part of the local character, if not of the gallery.

The firstsite story has been an inspiration to artists as disparate as Ai Weiwei and Grayson Perry, and under the theme of the Roman name of the town, Camulodunum, the inaugural exhibition also includes work by Henry Moore, Andy Warhol, Bill Woodrow, JMW Turner and Aleksandra Mir, emphasising the symbiosis of old and new on this site. “You could say it’s celebrating the sense of the place” Wood says, “but actually, it’s having fun with the place”.