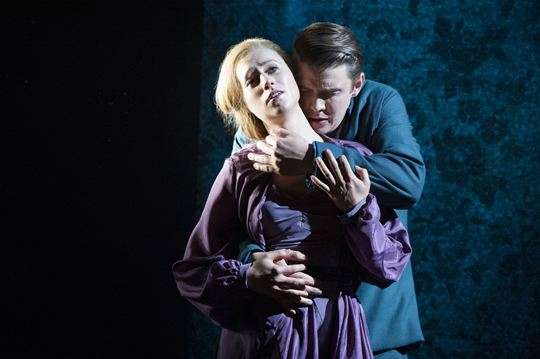 A chamber version of Debussy’s Pelléas et Mélisande: it should make perfect sense. The complexity of the relationships between Maeterlinck’s characters, the million delicate refinements of Debussy’s score: surely a scaled-down version could only reveal further subtleties to this most poetic of music dramas? Annelies van Parys’s 2011-vintage 13-piece re-orchestration holds the door wide open, allowing James Conway’s production of Pelléas to form the most ambitious part of English Touring Opera’s bold and rewarding all-French autumn season.

Van Parys’s reduction is a striking achievement in its own right, once you discount her decision to cut two scenes. With string and wind quintets plus percussion, harmonium and harp, it’s remarkable just how much of the texture of Debussy’s original comes through. The use of a harmonium (simulated here on an electronic keyboard) was particularly inspired, adding richness and giving the sound an inner glow. Conductor Jonathan Berman kept it moving forward, with a loving care for detail that never got in the way of the score’s long, overarching lines.

And yet, lose the sheen and depth of a full string section and somehow, paradoxically, you lose something of the opera’s intimacy. It’s as if the heating has been turned down. Oliver Townsend’s spartan set served as forest, castle and seashore alike; video projections by Zakk Hein offered effective but inconsistently applied hints at the natural world. With Conway’s tendency to stand his performers motionless around the stage, the drama felt distant and the atmosphere grew claustrophobic. A speech by Golaud, reinstated by Conway to replace a missing scene, brought Bluebeard’s Castle to mind.

So Stephan Loges’ brooding, ankle-booted Golaud dominated the drama; a black-toned, grimly compelling study of a human spirit in violent disintegration. Susanna Hurrell was wonderfully nervy as a wounded-and-dangerous Mélisande, staring wide-eyed at her first sight of Jonathan McGovern’s Pelléas, and singing with a voice that conveyed both fragility and a guarded sensuality, rapturously unleashed in the pair’s final duet: a scene that showed McGovern’s authentically Gallic-sounding tenor at its best. Lauren Zolezzi was a lively, knowing Yniold; and Michael Druiett brought solemnity and compassion to his tall, sonorous Arkel – though his slightly-too-passionate kiss with Mélisande left an unsettling aftertaste.

Still, Conway has never taken the line of least resistance, either as director or artistic director – and for all its beauty, a Pelléas that’s capable of functioning as a warm bath has something vital missing. If this flawed but intelligent production sent you out with plenty of questions unanswered, it left no question at all that Conway and his company have something distinctive to say about this troubling opera.