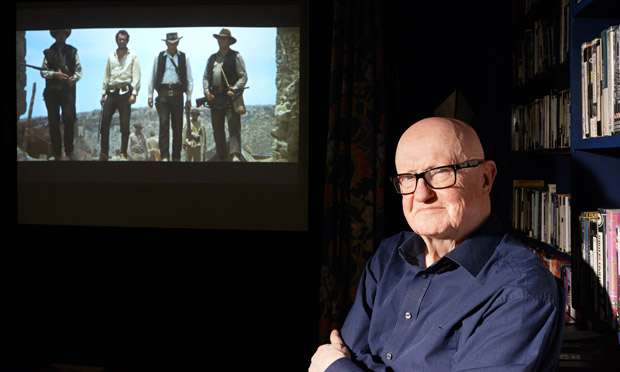 Philip French at home in his cinema room in London: Photograph: Suki Dhanda for the Observer ©Suki Dhanda/Observer

Jason Solomons remembers Philip French, a longstanding and greatly respected member of the Critics’ Circle Film Section, who passed away on 27th October 2015.

With an irony he would surely have appreciated, news of the death of Philip French, the great Observer film critic, reached me at the end of a movie.

It was in one of his regular spots, the Soho Screening Rooms, formerly known as Mr Young’s, one of those darkened rooms in D’Arblay Street where Philip must have easily spent thousands of hours watching his beloved films over the years.

This particular movie was Jafar Panahi’s Taxi Tehran, a clandestine film whose closing credits consist of a brief lament from the director about the fact that, due to the Iranian government censor and his continuing ban from officially making films, there could be no closing credits to this film. The supreme irony being that Philip would always stay to the end of the credits, whatever the film. Today, it was as if they cut them short in memory of him, to show what life would be like without people such as Philip French.

I spent 15 years in his company there and elsewhere. I say company, but we critics are alone in the dark and I think that’s how Philip preferred it. He’d sit in that front row seat, right on the aisle so nothing could impede his view. He’d practically disappear into the picture, like Cecilia in one of his favourite films, Woody Allen’s The Purple Rose of Cairo.

I had a little sit in that seat today, and had a look round. I patted it and whispered thanks to his ghost. I think they should retire the seat, or at least put a plaque on it. I always felt Philip looked very happy there.

Of all the film critics, Philip French was the man. His 35-year career at the Observer gave him an unprecedented platform from which he could impart his passion and equanimity on a weekly basis. Other reviews would come out first, but it was Philip’s Sunday opinion we all waited for, critics and film makers alike. His was, quite literally, le dernier mot.

He was often funny, going to any lengths to squeeze in a pun. He was always erudite, his writing bringing in references not just from cinema but from literature, theatre and even long-forgotten radio plays. He contextualised cinema for many generations and made it part of the artistic conversation. He was proud of his position as an influencer and saw the role of the critic as a vital one in shaping culture. He always stuck to that and inspired that in others. He didn’t expect everyone to have his frame of reference, but he did demand thought and reflection.

Consequently, Philip’s criticism was generous. He was rarely unkind or cruel and never dismissive, or worse, bitchy, even when squeezed for space in the later years when new releases became an onslaught rather than a pleasure. Indeed, his reviews allowed films to stand out from the barrage, to be considered as something apart from just another movie.

You felt he took as much time over criticism as the artist and film makers took to make them. Of course that wasn’t true, but it was how it came across. Considered opinion, reflected in tranquility. He was on the side of the angels and would select his Film of the Week lead review on merit rather than on marketing. And often he would have to argue for it, which is as it should be. I don’t believe it’s an argument he ever lost.

The Observer would always let him lead on the obscure foreign-language film or illuminating documentary ahead of the roaring Hollywood blockbuster or over-promoted British comedy, and as such he exerted a huge influence on the success of such films, nurturing the reputations of directors he admired – one such beneficiary was Inception and Dark Knight director Christopher Nolan, whose tiny debut, Following, immediately intrigued Philip (I remember seeing it with him, one late, rainy afternoon in aforementioned Mr Young’s) and he lead on it the following weekend, marking out the name of Nolan as one to remember – a typically perceptive phrase given that Nolan’s next film was Memento.

Philip loved Clint Eastwood and Westerns. He loved Woody Allen and Groucho Marx and the elegant New York wits such as SJ Perelman. He loved humanists such as Satyajit Ray, Jean Renoir, the Ealing comedies and Ken Loach and admired craftsmen and literary film makers such as Ismail Merchant and James Ivory, Louis Malle and Bertrand Tavernier.

He adored going to Cannes – “There, I’m like a child in a sweetshop” – which became too arduous a task in his later years and I was honoured and privileged to step into his white trainers to pound the Croisette in search of cinema gold.

I even inherited his hotel room, about which I was hugely excited until I entered a sparsely furnished garret in a faintly malodorous two-star by the station. “The festival did offer me something more luxurious,” he once told me, ” but I turned it down. I’ve no need for that – I like to be nearest the Palais and get all the comfort I need in the films.”

A few years later, I asked the festival for a bit of an upgrade and felt very guilty about it but, you know, I needed the Wi-Fi.

Philip used to say “what’s reviewed in Cannes, stays in Cannes”. Athough he was one of the rare critics to have been invited onto the main Jury (in 1986, alongside Sydney Pollack), he liked a little time to reflect, to pull all the meanings of a film together, to let it settle in that giant rolodex of a brain and take its place among the cultural ocean that rolled within.

He could name you directors and years of the most recherché films. He knew his Bergman – he loved Sweden and would summer there with his Swedish wife Kersti – as well as his Boulting Brothers or his Bond.

If, at the end of a screening, any of us critics had one of those itching, Googleable questions about what a certain film reminded us of, or where we’d seen a certain actor, Philip – always the last to leave the screening room, always –  would know it instantly and add a lengthy, tangential yet fascinating addendum to anything we could possibly wish to know. He was way better than the internet. He had a heart.

It was why he was so revered by other critics, by his peers. He had an honorary BAFTA lifetime membership, about which he was very proud, although he was, in retirement, always feeling guilty about watching films on DVD screeners. He was given a BFI Fellowship, a rare honour for a critic.

He was thrilled to be part of our The Film That Changed My Life season at the Barbican and he presented Bad Day at Black Rock with a typically personal flourish, topped with erudition. His family were there, as ever, supporting him proudly on the night, and listening to his stories of going to see the film in Leicester Square as a student.

Philip loved films but he also loved his family, drilling movie trivia into his sons around the dinner table – he even got into Private Eye’s Pseud’s Corner once when taking Sean and Karl to a Christmas-time football match at Arsenal’s old Highbury Stadium. Tumbling out of the old North Bank, Philip was overheard by a Private Eye snooper shouting out to his sons as he was separated from them by the sheer force of the crowd: “This is like the last scene of Les Enfants du Paradis…”

I kept in touch with Philip when he left the Observer. I’d decided to leave at the same time, having cherished every time I got to deputise for him and not wishing to do it for anyone else. His shadow probably inhibited my writing – one always felt one should start with a French-esque bon mot from cinema lore, but of course I didn’t have anything like the depth necessary to do four paragraphs loosely connected to that particular film’s actor, or director or previous incarnations as fledgling scripts for, I don’t know, Faulkner or Graham Greene, one of his own great heroes.

He and Kersti sent me the most lovely card and baby grow on the birth of my first son, full of puns incorporating my boy’s name, Cy, into several film titles. I’m trying to dig it out right now but can only really remember: Cy-lent Running.

I last communicated with him just two weeks ago, after he sent me a typically warm, generous and constructive review of my new Woody Allen book. I was so glad he liked it, my heart gave a little jump, so I know what those many directors must have felt when opening the paper on a Sunday, awaiting his approval. And because Philip never gave in to the star-rating system, it meant you actually had to read his words to find out what he really felt.

My heart goes out to his family and friends and to all the colleagues he has left bereft and whom he inspired, especially us younger ones. He showed us how it should be done. Thank you for everything Philip and I hope others appreciate you as much as I have…