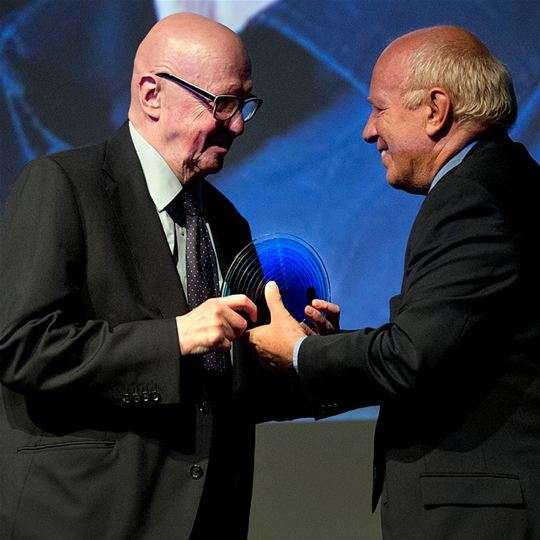 London, Thursday 26th September 2013. Last night Greg Dyke, Chair of the BFI presented Philip French, legendary, long standing, former film critic of The Observer, with the BFI Fellowship at a ceremony at BFI Southbank. The BFI Fellowship is bestowed by the BFI Board of Governors to individuals who have made an outstanding contribution to film and television culture.

The award was presented following an on-stage conversation between Sir Christopher Frayling and Philip French, celebrating a 50 year career in film journalism.

BFI Chair, Greg Dyke said, “As one of the most important and influential British writers on film and film-related subjects of the last 50 years or more Philip has done more than perhaps any other writer to build a critical context for the informed watching and making of film.”

Philip French said, “It is a great honour indeed for me to be offered a BFI Fellowship, and I accept with gratitude and alacrity. The BFI has been an important part of my life ever since I first bought a copy of Sight & Sound magazine on Newport station in 1951 and especially since I became a regular contributor to Sight & Sound in 1965.”

The BFI Fellowship is the highest award which the BFI can give and previous recipients include Martin Scorsese, Vanessa Redgrave, Judi Dench, Isabelle Huppert, Ousmane Sembene, Orson Welles, Satyajit Ray and Akira Kurosawa. This is the 76th BFI Fellowship presented since the award was created in 1983.

Philip French is widely and rightly regarded as one of the most important and influential British writers on film and film-related subjects of the last 50 years or more. Probably best known for his weekly contributions to The Observer, having been their main film critic from 1976 to 2013, he is also the author of several books on the cinema (including The Movie Moguls, Westerns, and Malle on Malle), the co-author (with his wife Kersti) of a BFI Classic on Wild Strawberriesand (with his son Karl) of Cult Movies, and the co-editor (with Ken Wlaschin) of a volume of poetry about film. Before taking up his post at the Observer, he was the deputy film critic of The Times, and for many years he was a producer for BBC Radio, overseeing first the Home Service’s ‘The Critics’ and then Radio 3’s ‘Critics’ Forum’.

After reading Law in Oxford, French gained a scholarship for postgraduate studies in journalism at the Indiana University at Bloomington – the beginning, perhaps, of a life-long interest in all things American, but especially history, politics, literature and the cinema. As a critic and film historian, he became famous for his erudition, his wit (often expressed through puns), his astonishing ability to recall virtually everything he has ever seen, heard or read, and his utter integrity and independence. He has often been referred to as ‘the critics’ critic’ (indeed, when an Observer poll invited British critics to nominate their favourite writer on film, French received the most votes, so that the term became semi-official), and in 2009 the British Press Awards named him Critic of the Year. More unusually, he has even been the recipient of fulsome praise from the filmmaking community, to the extent of being awarded a BAFTA Fellowship.

Unsurprisingly, Philip French has also been involved in the history of the BFI. In the 1980s for the National Film Theatre (now BFI Southbank) he curated a season of his own favourite films and a survey of how the press has been depicted in the cinema; more recently he curated seasons devoted to Joseph Losey and Billy Wilder at BFI Southbank.

In 2011, a collection of French’s writings was published by Carcanet under the title of I Found It at the Movies: Reflections of a Cinephile.