Pooh, the bear that delights young and old 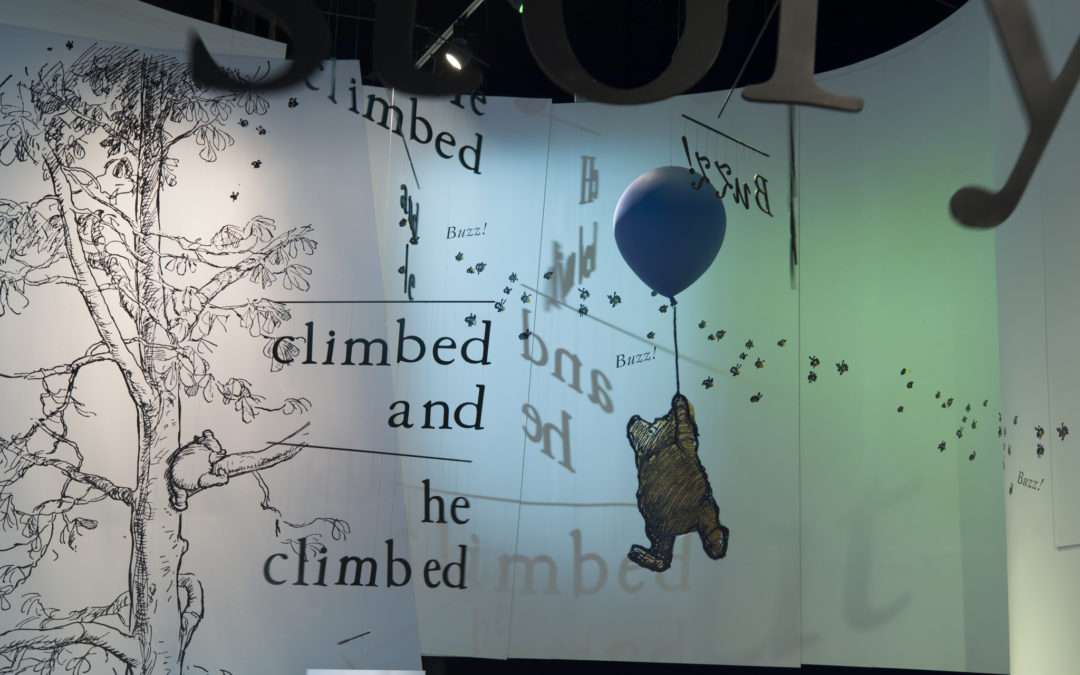 'The opening display for Winnie-the-Pooh: Exploring a Classic' © The Victoria and Albert Museum.

There is an enchanted place in the V&A, a place where wonder is being created. From the moment you even look for information on the website and find your cursor has become a swarm of honey bees, the Victoria & Albert’s Winnie-the-Pooh: exploring a classic is magic. 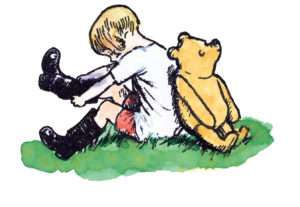 (c) Egmont, reproduced with permission from the Shepard Trust

If you grew up without A. A. Milne’s Winnie-the-Pooh you had a deprived childhood. Pooh is indeed the most adored of bears, long before Disney got his hands on him he was the star of most popular children’s books of all time, and the V&A is home to the largest collection of E.H. Shepard’s Winnie-the-Pooh original drawings, sketches and finished pieces. These art works have not been on display for nearly 40 years.

But this is not solely an exhibition of these winning art works. The exhibition explores the world of Pooh in many multi-faceted ways, with  archival exhibits from The Shepard Trust spanning more than 90 years of Pooh history, archives from the V&A, The Walt Disney Company, Egmont Publishing, The Shepard Trust and The University of Surrey all examined and presented, and featuring around 230 works from 1920 to the present day. 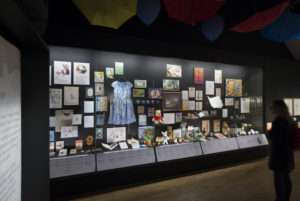 © The Victoria and Albert Museum.

It is revealed that Disney, while redrawing Pooh for the silver screen, retained his E. H. Shepard appearance for their merchandise, Shepherd having captured the essence that is Pooh so perfectly. All the real people, Milne, Shepherd and Christopher Robin, their relationships and inspirations are explored, as is the language Milne employed, its meaning, layout and interplay between Milne’s text and Shepherd’s illustrations, and the masterful placing of the words on the page that adds so much to the Pooh tales, revealing humour, intimacy, childhood curiosity and the simple joys children everywhere delight in.

But who can be serious with Pooh around? The V&A examine the world of Pooh in multi-sensory ways, suitable for children from 2 to 102. Immediately you enter you encounter the Bee-Tree with Pooh carried aloft by a blue balloon, disguised as a rain cloud, in his quest for honey muttering “The bees are getting suspicious”. There is the staircase, with half way up carefully marked. 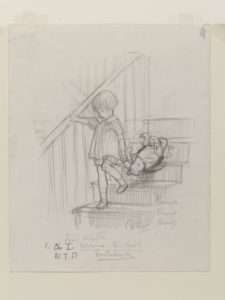 There is a digital pooh-sticks bridge where you can guess at which twig will emerge the winner. Eeyore’s House is dark and gloomy and naturally there is the 100-acre wood where younger visitors can dress up, or draw pictures using the ‘picnic’ tables. Cupboards show Pooh’s consumption of honey, storytelling trees keep visitors enraptured in his exploits and those of his friends; Christopher Robin, Eeyore, Kanga and Roo, Owl, Piglet, Rabbit and Tigger.

There is a darkened corner where you can hear how Piglet, nervously but bravely, rescued his chums when Owl’s house blew down trapping them all in an upside down world. On the ceiling, the text is animated and is used with glorious imagination. As the smallest of the group Piglet (the word), wobbles his way up a dotted line – a string attached to the letterbox  – then

S–q–u-ie–e—z–i—n–g and SQUOOZING his way through that letterbox out to the world, the right way up, to summon help for his chums.

To enter this exhibition is to enter again the imagination of childhood. Go, discover and play again with Pooh, Christopher Robin, Eeyore, Kanga and Roo, Owl, Piglet, Rabbit and Tigger and then you can go home, to tea with a pot of honey from the rooftops of South Kensington.

Winnie-the-Pooh: Exploring a Classic In Gallery 38 of the Victoria and Albert Museum until 8 April 2018