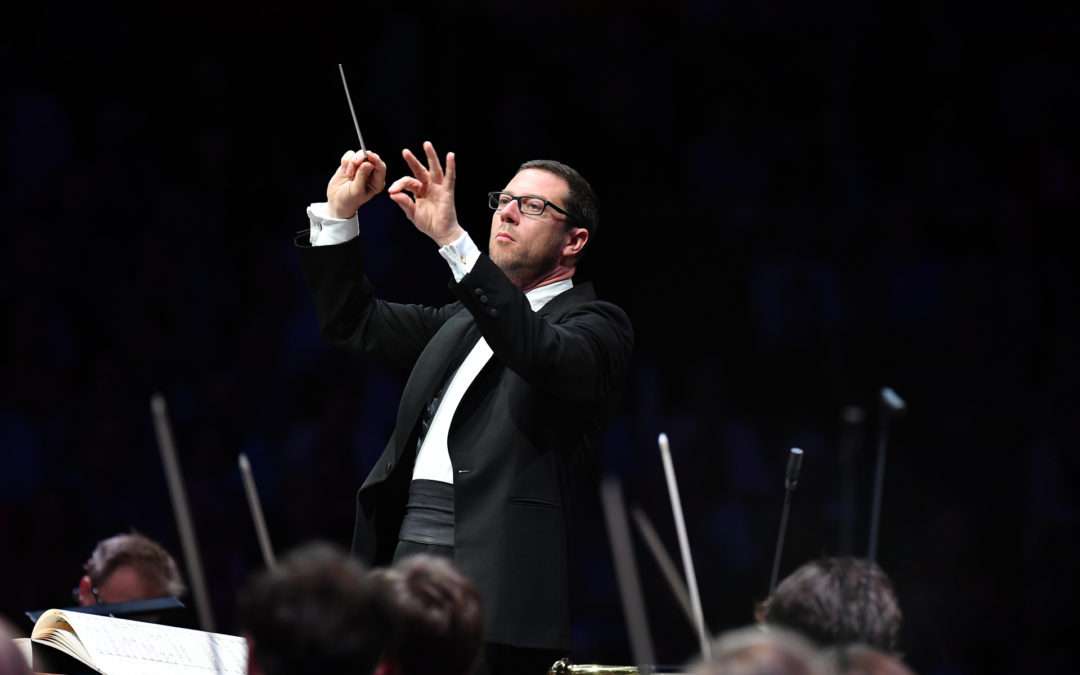 Several of the Proms have celebrated the American composer Leonard Bernstein in his centenary. Nothing has been more rapturously received than Bernstein’s musical West Side Story performed at the halfway weekend by the John Wilson Orchestra under the founder-conductor himself, who has become a big favourite at the Royal Albert Hall since his first appearance a decade ago. He has made the staged musical repertoire his own elevating the music from the pit to the stage, tightening its snap, intensifying its colours, shaping its lines, emphasising its wit. His thrillingly precise preparation of West Side Story fully revealed Bernstein’s genius..

Students of the form from ArtsEd and Mountview were the backdrop chorus alert to all nuances. Their finger-click entry loosened and electrified the hall, they sang with consonant-rich diction and an easy lyricism. In their throats, the Broadway vocal production has left behind its coarse beginnings and is now as artful to us as bel canto to the Victorians. The style is less easily accomplished by soloists who tend to avoid the head voice as too classically posh, but fear the chest as too dangerously raucous in the higher reaches. Ross Lekites as Tony sang affectingly but occasionally covered too much the prominent melodic leap in Tonight. Mikaela Bennett’s Maria was convincing as the smitten, delirious teenager but let the orchestra set the speed of I Feel Pretty and it was too quick. This was also a fault in Gee officer Krupke and the lyricist’s Stephen Sondheim’s wit was sometimes squandered. America, on the other hand, performed by the trio of Emma Kingston, Laila Zaidi as the Puerto Rican economic migrants was a tour de force. A guilty pleasure were Sondhaeim’s unpolitically correct but ingenious rhymes.

Bernstein’s actual 100th birthday on 25 August engendered several concerts. Celebratory exuberance went a little to Wallis Giunta’s head in her Cadogan Hall song recital when her dazzling mezzo verged on the hysterical in Marc Blitzstein’s Modest Maid and Berntein’s What a Movie!. She sang Sondheim’s The Miller’s Son beautifully though, capturing the composer’s tender pathos and showing how in his hands the musical has become the expressive medium of the latterday lovelorn with all their psychological hang-ups. Bernstein’s own depths were revealed in a performance of his Second Symphony The Age of Anxiety given by the Baltimore Symphony Orchestra under Marin Alsop who was Bernstein’s pupil and protégée. The title is that of a novel-length poem by WH Auden written in the USA and awarded the Pulitzer Prize in 1948 the year the poet became an American citizen. Bernstein was much affected by the text and produced his symphony a year later. It doubles as a piano concerto and as soloist Jean-Yves Thibaudet took the stage to explore with pearly clarity the different moods of four characters in a New York bar, searching for love, connections or just meaning. Alsop led the way through the brightly conversational first movement variations into the second movement Dirge with its anguished dissonance and dark ripples of the huge radiating gong summoning Auden’s absent resonating lines: ‘Sob heavy world / sob as you spin’.

The Baltimoreans preceded this with an eccentric Bernstein work Slava! written for the Russian cellist and conductor ‘Slava’ Rostropovich who had just become Music Director of the National Symphony Orchestra in Washington DC. It’s a satire for orchestra plus the recorded voices of politicians for a much-loved performer who had trodden a delicate path between the politics of east and west. In the second half, Alsop conducted a restrained performance of Shostakovich’s Fifth Symphony, the so-called Soviet Artist’s Reply to Just Criticism. With a subtle wand, she softened the jack-boot tread of the first movement, which too many conductors allow to become oppressive, and duly marked the ‘not too much’ of the allegro second subject. Consequently the second movement charmed the ear like a Russian folk dance while the third echoed the sense of loss in the mourning dirge of the Bernstein-Auden first half. The finale ran home in triumph, not of the political variety, but the personal, its heart-pounding close letting off an effusive feeling of release in the profoundest, most human, concert of the 2018 Proms so far.