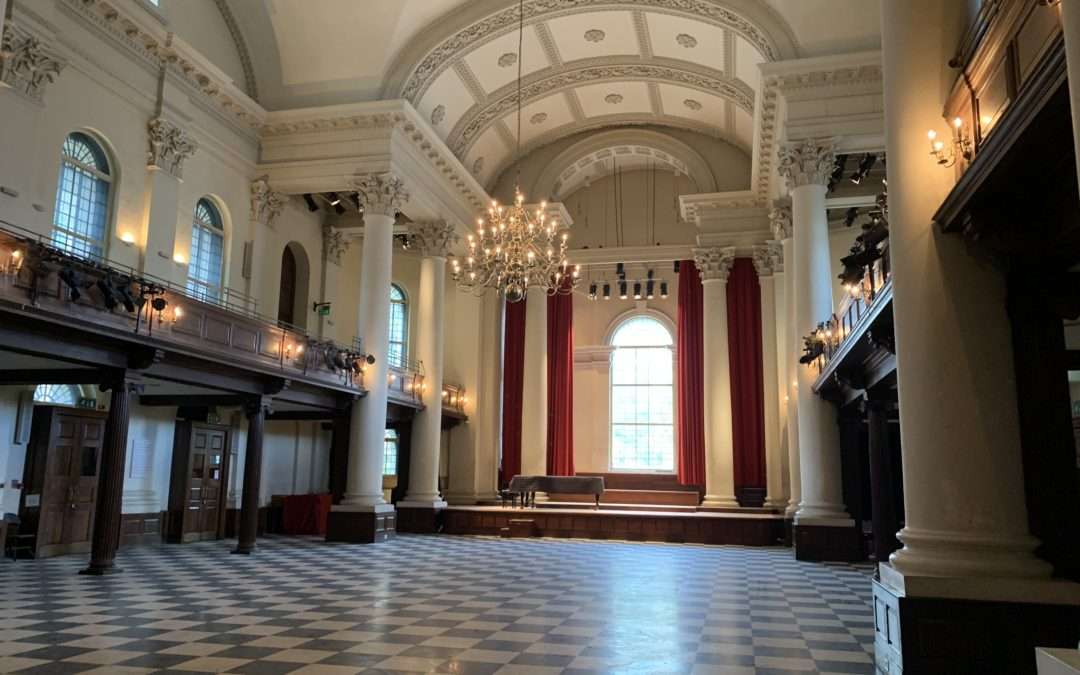 Melancholy never seems far away from any concert these days, and the final celebratory piece aside, the English Concert gave us a Purcell programme to milk it. St John’s, completely cleared of furniture, the orchestra luxuriously spaced in the wide-open nave, a very few seats for the audience on the stage in the apse and around the edges, looked fabulous, like a scene from Vermeer with its chequerboard floor, the columns and chandeliers glorying in the space, the magnificent organ case for once in front rather than behind. Sometimes concert-going these days makes you feel very old-school, like some 17th-century royal or bigwig, outnumbered by the musicians you’ve hired for your entertainment. I know it betokens all kind of bad things, but there’s no doubting the special frisson concerts can provide in the time of plague.

Two devotional songs were at the centre of the concert, one, O that my grief, newly discovered. With words from the Book of Job, it is a meditation on despair for two tenors and continuo, with a bass part joining the choruses. Written early in Purcell’s career, it is full of echoes of earlier English music, John Blow, for sure, but memories of Thomas Weelkes and the Elizabethans seem to hang in the air. The measured and harpsichord underpins the voices’ intricate, questing counterpoint, the words and phrases vividly painted in the Purcellian way, though nothing too literal. This was done with great intimacy, really as if it were a group of post-Renaissance polymaths investigating the world (and the heart) through music.

The rest of the programme had the same interiority. Kristian Bezuidenhout (born in South Africa, brought up in Australia, educated in America) is both an exceptionally sensitive keyboard player and a music director utterly devoted to the detail, sound and changing feelings of pieces and passages, more like a European than a British director. Even through some extremely bouncy tempi there was a feeling of expansiveness and amplitude in the band, led by Nadja Zwiener, and the sound throughout was rich, layered, luxuriant. The first piece, the rather contemplative (not to say downbeat, oddly so for a birthday ode) Love’s Goddess Sure was Blind, had close-harmony tenors (Anthony Gregory and Hugo Hymas) dancing with twirling violins, something like Monteverdi’s Beatus Vir seen through a warping prism of years and geography. One movement, ‘May her blest example’, is Purcell’s joke – at a palace soirée Queen Mary had got bored with his songs and asked the soprano to sing instead the Scots ballad ‘Cold and Raw’ – which the composer gives her again as a birthday present here, its thumping, modal bass line ingeniously adorned with counterpoint.

After another devotional song, Since God so Tender a Regard, hymn-like with solo verses answered and adorned by a decorated trio, we finished off with the best-known ode, Come Ye Sons of Art, its scoring cleaned up in a new edition reconstructed by Rebecca Herissone. The triple-time signature released the spells of the earlier pieces, the players jiving along decorously. The two counter-tenors James Laing and Hugh Cutting (a big voice in the making) sounded the trumpet elegantly, soprano Rowan Pierce sang a very delicate ‘Bid the Virtues’, a dignified pirouetting with the oboe, and Ashley Riches was the splendidly forthright bass. This was a very special, extremely concentrated hour of music – short and sweet, to be sure, but spiced with those sour, anguished harmonies Purcell liked so much, and much food for reflection.