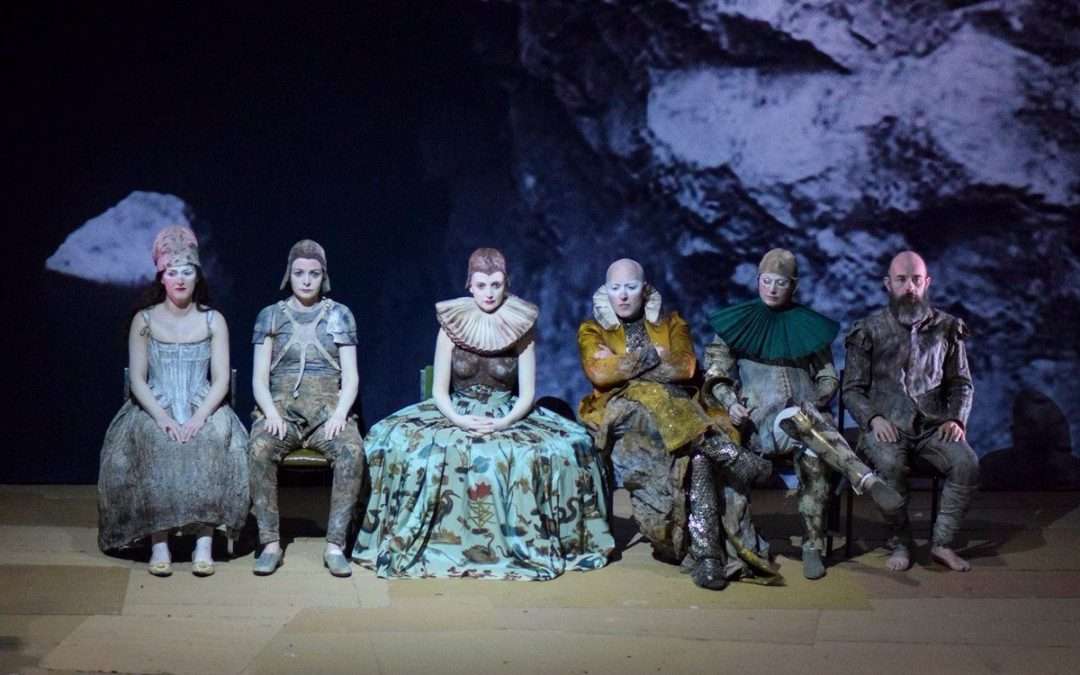 Handel performed only one of his operas – Imeneo – during his 1741 Dublin sojourn, but Ireland proved fertile ground for his works during James Conway’s time running Opera Theatre Company, starting back in the 1990s; the company performed many, some in their first revivals in these islands for nearly 300 years. That Handel tradition was taken up by Dieter Kaegi’s Opera Ireland, and last year Northern Ireland Opera took its turn with a tour of Agrippina. Nobody had ever got round to the 1720 Radamisto, until now, and this collaboration with the renowned Irish Chamber Orchestra was received with great enthusiasm in Limerick before embarking on a short tour to Cork, Dublin and Belfast.

NIO has a new artistic director: Walter Sutcliffe, for many years a successful jobbing director in Germany, has filled the space left by Oliver Mears’s departure for Covent Garden, and he was there to see the company’s effect on Irish audiences. And this typically low-budget but highly effective production was another fine advertisement for this ambitious outfit, which is making the most of a palpable hunger for opera in open-minded, under-provided Ireland: one of the pleasantest aspects of NIO’s work to date has been this reception of unfeigned, unguarded pleasure.

This opera can feel very abstract indeed: certainly there is action – battles, the fall of cities, revolution – but it is all very distant and unreal. Handel’s concerns lie in distressed souls and in the notion of distress itself – with its antonyms, comfort, love, forgiveness, fidelity. The text subjects the characters to intolerable pressure, revealing the spiritual resources that make them human, and is palliated by Handel’s infinitely sympathetic music. At the core are two couples: the dispossessed Radamisto and his wife Zenobia, and the gleefully evil usurper Tiridate and his wife Polissena, Radamisto’s sister. Inevitably, Tiridate desires not only Radamisto’s throne but also his wife. As in Rodelinda, Handel paints a vivid picture of the unfashionable subject of married love. Of other operatic composers, only Beethoven did this; it’s flippant but fun to point out that neither was married…

Wayne Jordan’s production (the first shot at opera by a fellow who does most of his work at the Abbey Theatre), conducted by David Brophy, cuts the opera considerably, entirely ditching one character, but concentrates the action to make the conflicts and jolts of fate even more immediate. I have plenty of sympathy with any first-time opera director faced with this austerity – and the opera’s dozens of da capo arias – but Jordan handled it pretty manfully, not generally succumbing to the rookie’s desire to fill up every bar with nasty bits of business. Given a decent cast – and this certainly was – you don’t really need much more than stillness and focus, and we got plenty of that. But there were failures of nerve, generally concentrated in the figure of a manic actor who did plenty of amusing turns, but whose interventions – not always impertinently meant – were often disastrously timed to induce idiotic theatre-laughter precisely in some of Handel’s most freighted, tragic pauses. I’ve seen a lot of stupidness inflicted on operas but little as stark as the foolish titter provoked from some during the breath-holding gap before Zenobia’s shattering words “Oh let me die now!”; I hope to God this stuff was excised from subsequent performances.

The suitably abstract setting was a cave or rocky tunnel where dusty neo-Mediaeval waxworks (her usual sleight-of-hand designs by Annemarie Woods, beautifully lit by Kevin Treacy) came to life to act out their obscure story of Transcaucasian strife. Brophy and the ICO were crisp and double-dotted from the start, not as frantic as is the current Brito-Hibernian fashion, but fully in tune with the pathos and particular colouring of this piece; I’d not heard Brophy conduct Handel before but this was gorgeously and sensitively phrased, sparkling and fiery where required (and with some excellently jagged lightning-bolts and fireworks in the cascading da capos) but giving and tender at those places where Handel holds out a comforting hand to his suffering characters in the form of a cello or oboe to guide them through their grieving. A wonderfully adept and stylish continuo from Julian Perkins (harpsichord) and Christian Elliott (cello) gave the recits real depth, pace and meaning – and the singers’ coaching in this was really exemplary, as was Jordan’s physical direction.

Doreen Curran (Radamisto) is an intense singer, very well cast as this sometimes fanatically gloomy hero, conveying his doubts about his own character in the sliding eddies of ‘Ombra cara’ and the interstices of the beautiful, spare continuo aria ‘Cara sposa’ (sung in Christopher Cowell’s rather good translation). Radamisto and Zenobia’s arias tend to come in pairs, and Sinéad Campbell-Wallace, the evening’s most sumptuous and rounded voice, made absolutely the most of the plaintive oboe-accompanied ‘Quando mai’ (with rapturously lyrical accompaniment by the young Royal Philharmonic principal John Roberts) and the cello-led ‘Deggio dunque’.

Aoife Miskelly’s bright-sounding, abused wife Polissena kept annoying her husband with reminders of the human cost of his actions: the heartstopping ‘Tu vuoi ch’io parta’ right at the start brings things to a juddering halt and perhaps sows the seeds of Tiridate’s ultimate conversion. Richard Burkhard did his usual brilliant turn as the villain in a part that could have been written for him, Kate Allen was the sweet conflicted Tigrane, and Adrian Powter made a lot, with words and expression, of the usurped, Learish Farasmane, father of Radamisto and Polissena.

There’s single-minded strength and conviction in this piece, as well as compelling dramatic drive, that quell any doubts about the genuine seriousness of opera seria and whether it’s a sensible vehicle for grown-up tales of human woe. Even the to-us risible convention of the “lieto fine” (happy ending) seemed natural and right: after so much grinding misery, they had earned it, and how, really, could bad Tiridate stop this flood of forgiveness and sympathy from melting his icy heart? Mozart, 50 years on, would make reconciliation the lodestone of his art, but the humanist Handel knew love could mend the world long before that.