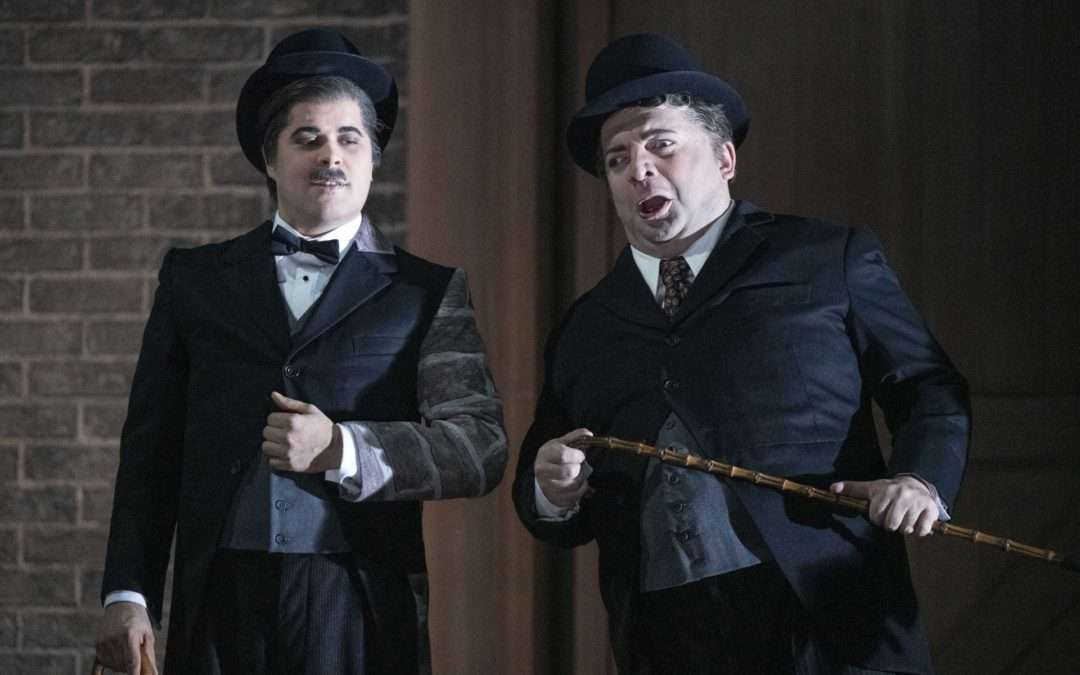 Glyndebourne’s touring company used to serve two purposes; partly it was a way of spreading the quality of Glyndebourne’s own festival productions more widely around the country, but more importantly it helped some talented British chorus-members become stars by taking leading roles (as I recall Felicity Lott doing). Nowadays its casting is as international as the festival, and sometimes higher-class. It also serves to launch new productions that usually return in the next summer festival.

The serious question is: will the new Rigoletto be scrapped? Last year’s new tour staging was Cendrillon (Massenet’s Cinderella) directed by Fiona Shaw, which was radically altered in many ways (and less good) by the time it came to the festival, revived and directed by Fiona Dunn. But Christiane Lutz, who directed the new Rigoletto, is married to Jonas Kaufmann, and got the job from Sebastian Schwarz during the brief period he spent discovering he was not really running Glyndebourne before he left. Schwarz knew Lutz from the Theater an der Wien. She has never directed a major opera before in a serious opera house. Rupert Christiansen, interviewing her for the Daily Telegraph, suggested she would avoid the typical German directors’ rewriting of the narrative.

Alas no. Her Rigoletto is implicitly a Chaplinesque comic, obviously not how Verdi saw Victor Hugo’s play Le roi s’amuse. Her Duke is a film director working with Rigoletto. We are perhaps in a brick barn on the Glyndebourne estate. Is it just a film in the mind? A girl who has been #MeToo-ishly “handled” by the film director (and given birth to a daughter: guess who) rushes up four flights of steps to the flies and is next seen elegantly falling to her death on the stage, twisting and turning. People with no music or words play mysterious roles not in the script. Are they real? Before Rigoletto’s encounter with the hired executioner Sparafucile, a projection on the front cloth tell us “Seventeen years later”. That is true German nonsense! Gilda is driven in a snazzy vintage sports car by a chauffeur who later turns out to be the Duke. Perhaps Stephen Langridge, Schwarz’s current successor, will revise and remove these really dumb elements before the show gets into the festival. Lutz’s crazy alterations and inspirations will infuriate anyone who knows and adores this great opera. She completely ruins the way it reaches its moving destination.

I have never seen a production in which the murdering innkeeper Sparafucile (Oleg Budaratskiy) is so undermined, nor his sister Maddelena (Madeleine Shaw) making so little impression. He is a mere barman in a pub. Presenting the Duke’s court as a film-set clashes rather with Rigoletto’s superstitious fear of being cursed. A film director’s abuse of power is not life or death, as in a medieval Italian dukedom. Conductor Thomas Blunt goes at it all far too fast, desperate to get through it. One can see his point.

The only compensation is the quality of two singers. Matteo Lippi, as the film-directing Duke of Mantua, is a seriously good tenor, though bewildered by what he has to do. Nikoloz Lagvilava as Rigoletto is as endearing and complex a figure as he should be, with a fine voice and panda-like expression of confidence and serenity whatever happens. Vuvu Mpofu, a former Micaela in Cape Town Opera’s Carmen, has a lovely promising voice but seems challenged by Gilda’s music. She is also a bit grand in style and mature in appearance for Gilda’s youthful innocence. Lutz’s staging misplayed every aspect of a story that can deeply move us. Such a disaster ought to be scrapped. But Glyndebourne, having invested, will probably try somehow to make better sense of it all next summer.