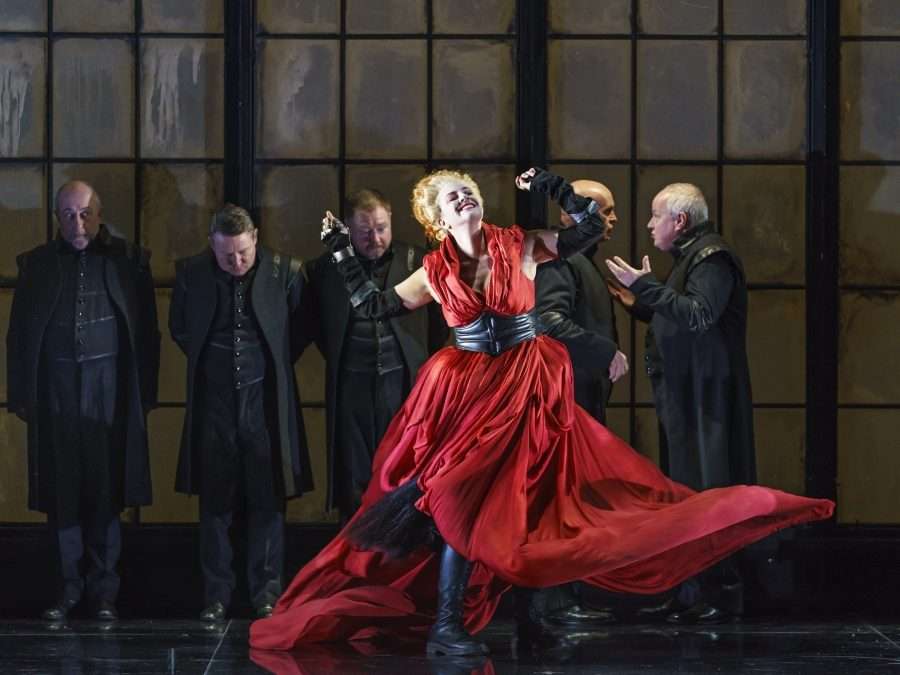 The low point in Donizetti’s “Elizabeth and Essex” opera comes when the pit strikes up a version of the National Anthem. The howling anachronism isn’t the problem: the history of opera contains many such, and we tend to cope. The trouble is, it makes audiences titter. Other than that, the overture is a spritely piece that does little to prepare you for the blood and guts that follow. Fortunately, the orchestra under Carlo Rizzi is excellent both in the light-footed overture and also the intense drama of adultery, treason, jealousy, friendship, betrayal and revenge that ensues.

The eponymous earl Roberto is sung by Barry Banks, and it’s not his fault he doesn’t look much like the glamorous historical character; he carries the role well. The tenor hero is pitted against a baritone husband in an adultery plot. Nottingham, sung by Biagio Pizzuti, has to manage one of those in-plot transformations: he starts off as the all-round good guy, loyal both to the queen and his friend Essex; he ends up pursuing a blood-feud against the same earl, having discovered his wife Sara’s attachment to Roberto. All this Pizzuti does well.

The female lead, logically, is the soprano Elisabetta. In this production Joyce El-Khoury is togged in red with a red wig to match. Much of the set and costumes are blacks and greys, so you certainly notice her. El-Khoury is mounted in a spider-legged chariot that works like a storm-damaged umbrella with the silk ripped off. Voice-type conventions notwithstanding, El-Khoury is directed to act the queen as witch-like, leaving mezzo Justina Gringytė as Sara getting the sympathy vote, as though she were a wronged woman. Her duets with husband and admirer are quite wonderful. Only gradually do we understand the queen’s situation: like the Marschallin in Der Rosenkavalier, she is just getting older. The conflict between the two women, and the two voices, is part of the joy of the opera, and this production makes the most of it.

To ensure we get the point of the spider-mobile, Alessandro Talevi’s production opens with courtiers gathered around a spider in a light box and Roberto’s arrest includes being caught up by threads. When the lovers are on stage, the box shows a pair of butterflies; I didn’t examine the antennae, so they may have been moths. Either way, I’ll leave you to wrestle with the symbolism.

More successful is the use of windows as scenery (designs by Madeleine Boyd). These recall the 16th-century fashion for larger windows, famously in Hardwick Hall, and allow for shadowy comings-and-goings which help convey an atmosphere of secrecy, ambition and backstabbing. This is supported by a lighting plot designed by Matthew Haskins in which islands of illumination emerge from surrounding darkness.

But the intensity of the love quadrilateral, Elizabeth and Essex, his beloved and her husband, ensures that the production is never gloomy.