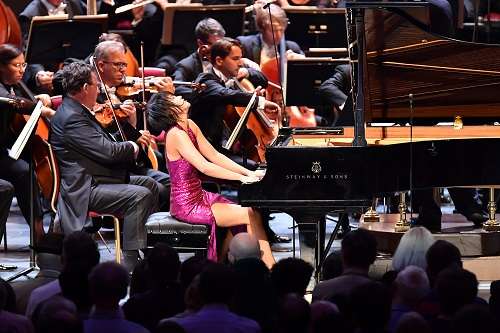 Brahms and Rachmaninov: the acceptable face of conservative programming? These two composers, each representing his own kind of retro-chic, make for a nice balance of sensual and intellectual, a celebration of the Romantic orchestra, of virtuosity and earnestness. More importantly, they can be relied on to sell out, as these two concerts at the Albert Hall (Prom 63) and Barbican showed.

The reaction to any concert featuring Yuja Wang threatens to drown in cliché – and I don’t mean the pianist’s mannerisms so much as the prissy carping about her nice shoes and frocks (and how they obviously mean she’s not a serious player). As usual with the narrow-minded bitchiness of the music world it completely misses the point. What Yuja notably does so well (in addition to playing the piano) is to emphasise and dignify the visual nature of concerts – frequently showing up dowdy-looking orchestras, that non-glorious British speciality, on the side. With the Dresden Staatskapelle properly dolled up in concert gear (all the same shade of black), her shimmery floor-length puce dress made for handsome stage picture.

The Dresdeners and conductor Myung-Whun Chun had correctly divined that the audience had come for Yuja, and took a contemplative back seat through Rachmaninov’s Third Piano Concerto. She didn’t disappoint – of course. There were certainly moments where her tone could have been more even, and the most fabulous virtuosity and musicianship can hardly disguise the deficiencies of a piece that keeps stubbornly veering towards porridge, but as a sustained piece of engagement, a search for the essence of the concerto, this was impressive. A dreamy Vocalise and artfully cheeky Tea for Two rounded off the first half.

Done with accompanying, the orchestra woke up to an almost alarming degree in Brahms. The Second Symphony was pure rapture, the central movements reaching a level of breathless ecstasy. This was where love and hard work met: a symphony in the orchestra’s bones, a conductor showing where the rehearsal time had gone, texture, balance and emotion in exquisite equilibrium. Undeniably lovely solo moments were subsumed in tutti orchestral gorgeousness that reduced the old 5,500-seat stadium to something much smaller and more intimate. It’s still on the BBC website for a couple of weeks: I’ll be listening again, and so should everyone.

Simon Rattle’s a different creature from Chung, the London Symphony Orchestra a different breed of high-powered band. This Barbican take on the two composers was always going to be text over texture, head over heart, though judiciously balanced by pianist Emanuel Ax’s calm mastery. He doesn’t look emotional, even if the piano tells us otherwise. The thickets of Brahms’s piano writing in the Second Piano Concerto don’t yield their secrets so easily, but Ax finds an apparently effortless channel to their heart.

But that’s just how it looked: the musical effects were much more turbulent: Ax’s unhysterical but forthright playing provoking the orchestra to furious passions, driven on by Rattle’s propulsive momentum. And then there was the opposite, the first movement theme re-emerging magically at the end from Beethovenian, rhapsodic doodles, the rain and mist clearing to give a glorious day.

The third-movement duet with cello, usually a highlight, was rather unpoetic, Tim Hugh’s playing fairly monochrome, but the Hungarian finale was all genial, smiling, swaying sunshine. A relaxing encore of a Schumann Fantasiestücke saw Hugh on more lyrical form, but frankly nobody had come to hear Ax-the-accompanist, however nice a goodbye gesture this was to the LSO’s long-serving principal cello, off to Covent Garden at the beginning of October.

To the inattentive this might have seemed at first glance a pop concert, but these are weighty pieces, each nearly an hour long, and Brahms had covered a lot of territory. Rattle was determined to take us on a journey with Rachmaninov – his Second Symphony – too, starting in horror-film territory with the ominous, brooding intro, that brand of Mussorgskian Russianness that evokes depths of striving hope and its eternal thwarting. Rattle gave himself the task of digging out these paradoxes and then holding them in equilibrium, a tricky idea but realised with real panache, holding the fiercely conflicting elements of the second movement together, keeping the shape, bolting down those cascading violins before they turned into the full Mantovani. There’s a lot going on in this symphony, and Rattle made it utterly cogent.