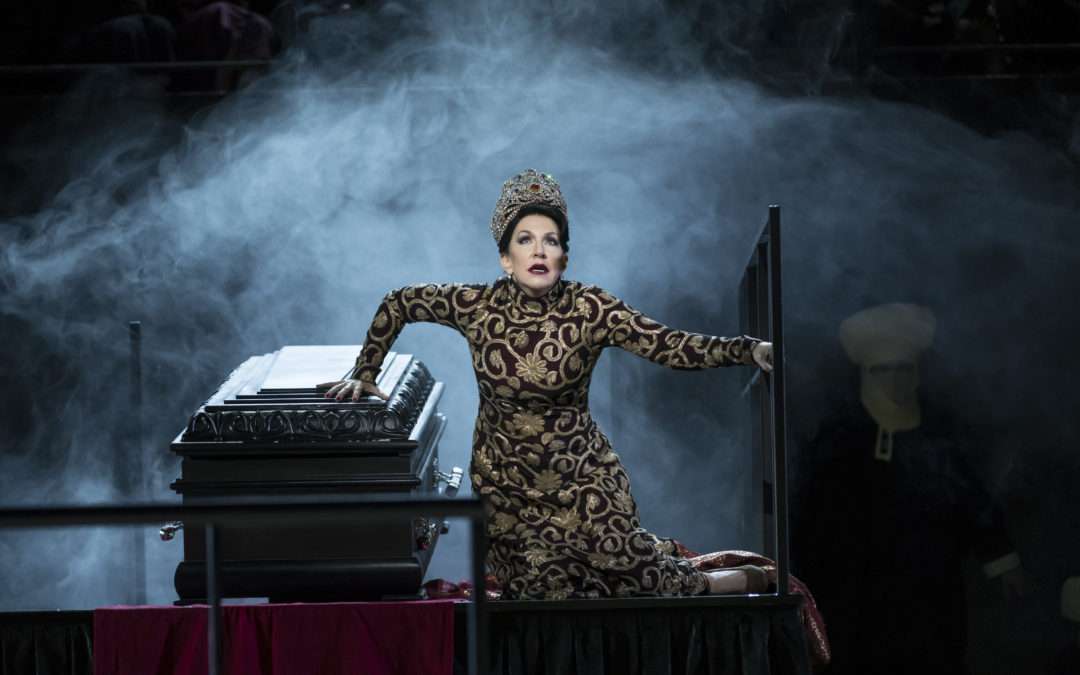 Semiramide, written for Venice in 1823, was Rossini’s last Italian opera seria, before he spread his wings with trips to Vienna, London and above all Paris – though he never profitably adapted this particular Voltaire-based tragedy to the French taste for grandeur (which he helped form and which led to Meyerbeer and others) as he did with many of his other pieces.

In many ways Semiramide may be regarded as the last baroque opera, and the plot feels as complicated, improbable and lacking in genuine emotion as some minor Handel operas. Yet because the music is so beautiful and challenging to perform, and perhaps because this opera was written for his wife (and former mistress) the mezzo-soprano Isabella Colbran (whom he had just married and for whom perhaps he created bel canto that was more capable of drama than the libretto and material really deserved) it is capable of much feeling and operatic emotion. In effect the magnificence of the vocal writing looks forward to Bellini and Donizetti more than back to the baroque.

The piece has not been revived at Covent Garden for 130 years. Admittedly it takes time to get going and the title role is initially somewhat stilted. But Joyce DiDonato as this monstrous Babylonian queen (who like Catherine the Great had disposed of her husband and kept the throne) displayed everything needed for the part by way of vocal colour and facility and elegance of interpretation. This was a performance that really deserved to be called world-class, with DiDonato’s top as thrilling as her effortless-sounding runs and passage-work. With the ripe, more contralto-ish Italian mezzo of Daniela Barcellona as her leading general Arsace (and, as the plot finally reveals, her missing son), the resolution of the story in their swelling and long Act 2 duet was one of the most ravishing, fabulously sung vocal experiences I have had at the Royal Opera for a long time. Both artists were decent actors, Barcellona in a less-than-flattering costume tending to be more stiff.

At every level this was a wonderful cast. Lawrence Brownlee as the Indian King Idreno provided the lyrical and the heroic in his subtly controlled, stylish and focused tenor. Three members of the Jette Parker Young Artists scheme held their own effortlessly in such notable company: Konu Kim as Mitrane, Simon Shibambu as voice of the restless ghost of Semiramide’s husband, and Jacqueline Stucker as the Princess Azema (in a very weird and wonderful costume) who finally gets the husband she wants – Arsace.  When Michele Pertusi as Prince Assur was taken ill after the first act, Mirco Palazzi – slated to take the part later in the run – stepped in with tremendous panache and energy.

David Alden’s production, created with the same stars in Munich earlier in the year, is solid, fairly unpretentious in approach and quite effective. Choruses enter and leave without much attempt at making them anything more real. The updating was tactful rather than dramatically exciting. The suggestion of Paul Steinberg’s modern-context sets is that it’s all happening in a former Soviet country now under a (perhaps North Korea-like) dictatorship. So the scenes in the temple are dominated by a towering statue of (presumably) the murdered Nino. But the actual spaces and walls look very subfusc compared with costume designer Buki Shiff’s beautiful range of costumes for DiDonato, Brownlee and Azema. For Antonio Pappano conducting, this Rossini was clearly ideal territory and perfect for his solid instincts about pace, colour, and above all lyrical assurance. For David Alden, who has done so much fine work at the Coliseum and in Munich, getting onto the current Royal Opera menu – with more in the pipeline – is not before time.