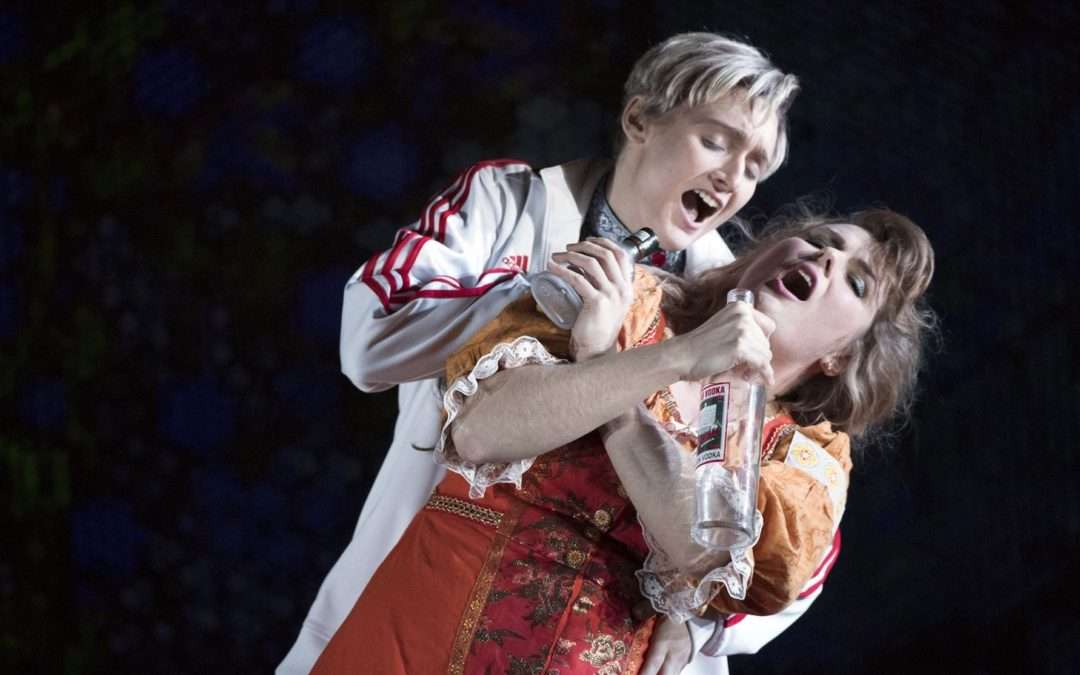 Opera North has long been careful with money, and the decision to programme three fairy-story operas using one designer (Giles Cadle) with three different directors must have looked quite canny. However, in practice it had less ideal results. John Fulljames was engaged to restage an opera he succeeded with quite well at the Wexford Festival in 2008, Rimsky-Korsakov’s Snegurochka (The Snow Maiden). In Wexford the opera was cut considerably, and in Leeds it was even more reduced. A programme note by Marina Frolova-Walker suggested how rich and extended the material could be; if filleted too severely, it’s hard to make much of it. Fulljames in Wexford had transposed the local Russian mythology into a world of more contemporary elements: a forest formed from ruined factory piping rising into the flies, and instead of weird birds and peasants, hippies and factory workers. He held to an adaptation of this approach with this Leeds production. But it was not very inspiring or meaningful, and one struggled to see how factory seamstresses cutting fabric and stitching shirts were supposed to relate to the world of Father Frost and Spring Beauty, whose illicit liaison had produced the lovely Snow Maiden.

Moreover, in Leeds Tsar Berendey, thanks to the economy afflicting Cadle’s designs, did not have his palace presented as a shipboard luxury bathroom on some cruise – which was Fulljames’s fantasy in Wexford. But nor was there any hint of a palace as a better substitute for that oriental “luxury”. And it was additionally unfortunate that sickness meant both the title role and the Tsar had energetic but vocally unmemorable stand-ins for the Leeds performance I saw. The Berendey tsars were Russian fairytale avatars of Turkoman tribes, providing Rimsky with an excuse for yet another layer of folksiness. But all that kind of thing means little in Yorkshire today. Nor was Leo McFall’s conducting very persuasive or stylish. Yvonne Howard and James Creswell made something of Snow Maiden’s erring parents. And Heather Lowe enjoyed the young peasant lover Lel whose pursuit of Elin Pritchard’s Kupava teaches Snow Maiden what feelings of love could arouse. Philip Rhodes enjoyed the more Yorkshire character of Mizgir who is to be the real thing for Snow Maiden until emotion melts her away. The piece has lots of rewarding music – if only its narrative were a bit less obscure and forced.

None of the visualisation Cadle provided fitted into the panto format that Hansel and Gretel normally requires. Instead, director Edward Dick suggested the brother and sister were playing at the Brothers Grimm story while home alone in their towerblock flat. None of the production therefore could really gel with the fabulous and lavish inventiveness of Engelbert Humperdinck’s irresistible score. There was no heading off into mysterious woodlands with reward as well as risk – wild strawberries to pick and eat, and a dangerous gingerbread house to intrigue and endanger the children. And without a proper change of location, the arrival at the flat in the final act of Sue Bullock’s Mother now turned into a sort of comic glamour-puss Witch was a pretty muddled adaptation of the story: though of course the destruction of the wicked witch happened as prescribed in the story – pushed into the oven by Hansel on the spur of the moment, and exploding.

The dynamic matters in the Grimm story. The children are hungry at home. Getting out into the country is an adventure but it also provides the chance to learn and grow up; the narrative arch is meaningful as well as entertaining. The children go to sleep in the wild, but are protected. The Sandman and Dew Fairy suggest that all is well in the world. And it is from that sense of ultimate security that the children’s vulnerability comes, when they find and are tempted by the gingerbread house (which Edward Dick’s staging and Cadle’s design both ignore or omit). It is not really Hansel and Gretel if there is no journey and nothing to discover on the way – no real experience. Hansel and Gretel need to be really at risk of becoming the witch’s latest victims in order to achieve the magic feel-good resurrection that follows. With no gingerbread house in Leeds, not much of this was clear.

Christoph Altstaedt conducted with real sensitivity and feeling for the idiom, lavishing care on the wonderful colours in the Humperdinck score. Katie Bray’s robust Hansel and Fflur Wyn’s delicate Gretel, rather similar in timbre, both worked well for Dick, filling the tower-block apartment living-room with hyperactive games-playing. Susan Bullock doubling Mother and Witch presented the bad side of life with energy and plenty of wit. But the narrative matters most, and Dick’s updating and relocation obscured the ideas with which the story so effectively toys. Good project to have these fairy operas staged, but not well achieved.