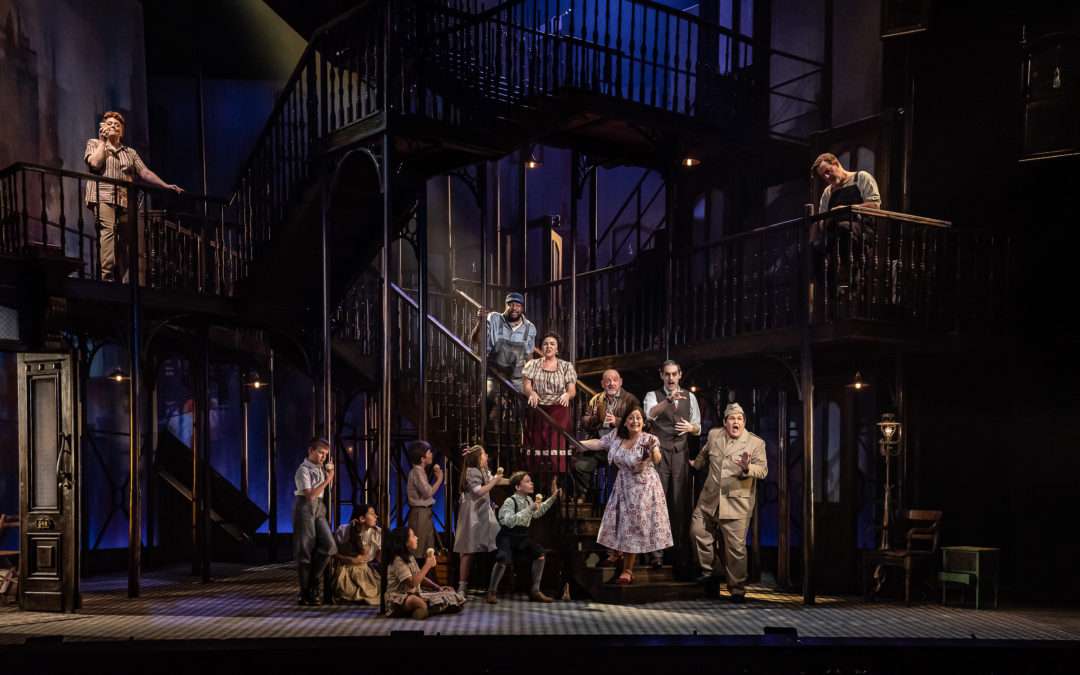 Kurt Weill’s 1947 “Broadway opera” contains much fine writing, musically and dramatically. It is not shaped like a verismo opera: its excellent songs do not play the same intently focused role as in Puccini. Yet it shows off Weill’s huge theatrical talent despite (or perhaps because of) being an experiment. It flows effortlessly between speech and song, and its music responds in a thoroughly cinematic way to Elmer Rice’s compelling 1929 drama about tenement life for the poorest in Brooklyn.

The “Broadway” label implies a different creative ambition from operetta or musical – though Weill knew exactly the theatrical challenge he was setting himself. Street Scene is an intriguing hybrid, a modern singspiel that switches readily from spoken dialogue to contextual song, but what gets sung lacks the confessional effect of opera. The relationships and narrative in Street Scene are demonstrated in various ways, including dance, but mostly in dialogue.

Opera North and English National Opera staged this energised Weill piece together in 1989. But really its professional UK premiere was in 1987 at the Palace Theatre, with a superb line-up of talent and very little rehearsal (just two for the orchestra). The show raised money for the Lighthouse on International Aids Day. The conductor was John Owen Edwards. The cast included Elaine Page and Gay Soper as the comic nursemaids, Janis Kelly as Rose Maurrant, Paul Harrhy as Sam Kaplan singing the great hit song of the work, ‘Lonely House’, Hilary Western singing Anna Maurrant’s great number ‘Somehow I never could believe’, and Alec McCowen.

Weill’s cast totals an uncommercial 75. Opera North’s line-up is quite luxurious, with Robert Hayward in the short but crucial role of Frank Maurrant, the jealous husband who surprises his wife in bed with the milkman, and shoots both. Francis O’Connor’s set design gives us the interior staircase and corridors of the tenement, more challenging for the young stage director Matthew Eberhardt. It adds to the realism but doesn’t help the audibility of singers’ words, which often go missing whether one is sitting in the stalls or the balcony.

Giselle Allen as Mrs Mourrant, with nosy neighbours’ disapproval, earns sympathy quickly in her nicely sensitive performance, and Gillene Butterfield is superb and deeply affecting as her intelligent, honourable daughter Rose, in love with Sam Kaplan (Alex Banfield) a Jewish law-student neighbour whose sister Shirley (Amy Freston) warns against his “marrying out” – saying “You can’t mix oil and water”. Christopher Turner gives a ringing account of the coarse Italian Lippo Fiorentino. The weakness at the start lies in the women gossips: Claire Pascoe’s Emma Jones, Miranda Bevin’s Greta Fiorentino and Amy J. Payne’s Olga Olsen, all of whom were hard to follow. But Banfield’s Sam is beautifully acted and sung, the gift role of the piece, whose unspoken theme is a deep anxiety about a future in “the land of the free” which these young ones represent.

Not for a moment does Quirijn de Lang as Rose’s persistent boss Harry Easter have a hope of winning her. Christopher Nairne as young Vincent Jones never stands any chance with Rose either. The children, above all in their dance number (choreography and movement Gary Clarke) are excellent and hugely applauded, though the danced duet ‘Moon Faced, Starry Eyed’, with its wonderfully catchy music, was tricky to bring off on the staircase-dominated set. These reservations may be cleared up as the show runs in. It offers so much. The convincing acting of the tragic denouement makes the piece quite as distressing as Weill intended. Conductor James Holmes is highly experienced with Weill, who is excellently served in every way. Opera North deserves maximum support for meeting this challenge; its deeply emotional tale of devastating authenticity more than once brought tears to my eyes. The central characters are utterly convincing; great credit to Eberhardt’s directing. Weill’s unusual affecting opera is not to be missed if opera matters to you.