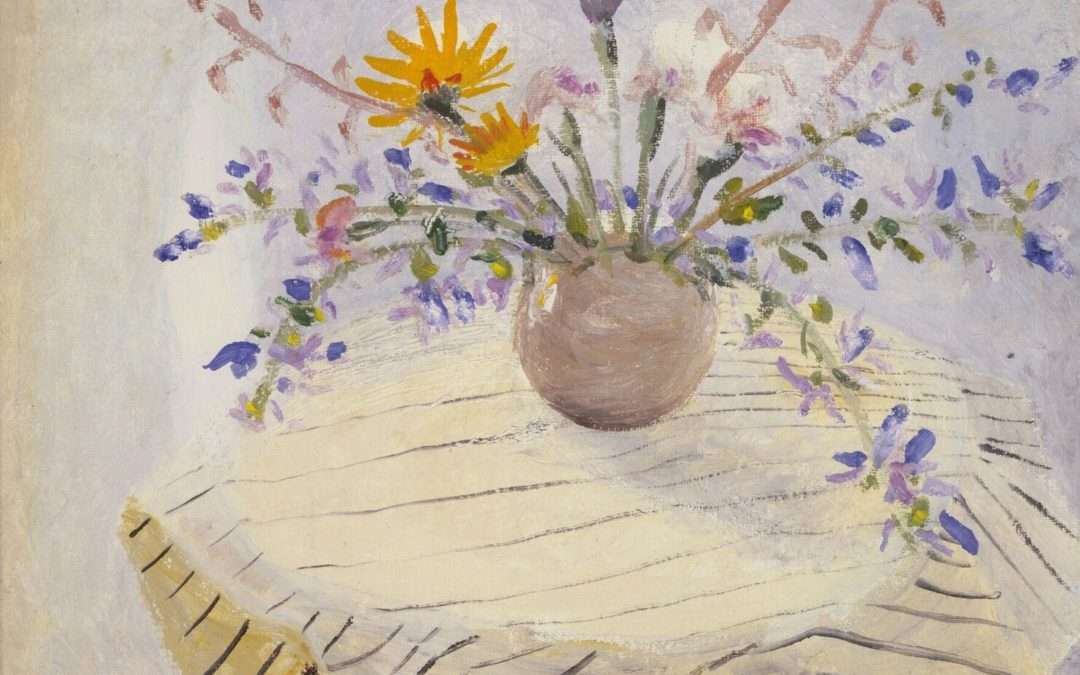 Winifred Nicholson spent much of her life in Cumberland; she both grew up and lived there during and after her marriage to Ben Nicholson. Thus Abbot Hall’s current exhibition curated by her grandson, Jovan Nicholson, is well placed. The gallery has had a long association with her work. This is the fourth exhibition of her work there since the grade 1 Georgian house opened as a gallery in 1962. The current exhibition, which now moves to London’s Kalman Gallery, presents 46 paintings that provide a perfectly studied choice of her works of the county.

The exhibits span her entire career; the earliest piece being a water colour from c. 1910, of The Dacre Beasts from Naworth Castle, near Brampton. She was related to the Howards, successors to the Dacres, through her mother and she spent time at Naworth as a child. (The Dacre Beasts themselves are now in the V&A.)

Cumberland is a place of rough moors and bare fells, its wide sky fells often obscuring the uplands with low cloud cover. The weather is ever present. Driving rain saturates the hillsides, startling sharp shafts of sunlight breaking through clouds, enrich its colours. Nicholson painted the Cumbrian landscape in lush greens, subtle magentas, soft ochres and rich greys and would write in a letter to her son, Jake: “Sunlight in Cumberland after all the rain, it’s like no sunlight anywhere else”.

She was also aware of Cumberland’s rich Bronze Age and Celtic heritage. Her house, Bankshead, which she bought and converted with her husband Ben, was on the line of Hadrian’s Wall and was built from its stones. We see her painting of the stone circle, Meg and her Daughters, painted in the 40s.

She also painted Cumbria’s flora combining interior and exterior views. These studies in nearness and far distance are both still lifes of wild and garden flowers on windowsills in carefully chosen pots, leading the eye out to the landscape beyond. The views indicate which room she painted them from, working not just at Bankshead or Boothby, her parents’ home, but at the homes of friends she visited. Crainsbill, St Bees, is a view looking out from St Bees headland, flowers dexterously placed on the horizon drawing the eye out to the Isle of Man beyond.

Nicholson made her first important discovery in colour early, during an extended trip to India, Burma and Ceylon, in late 1919 and early 1920. It was the way eastern art used lilac to create sunlight. Despite her tutor at the Byam School of Art in London, where she trained, saying that she saw too many colours, she was a subtle colourist and would say: “Violet is the colour of highest tension, the colour only visible in its beauty at moments of high vitality and clearest sunlight. It is the most difficult colour to use, and those artists whose primary interest is form always remain within the safe precincts of the lower notes of the scale, vermilion and blue with brown and neutrals. Those artists who have been interested in the potency of colour have always investigated violet – though they rarely use more than a little of its suspicious magic”.

It must be stated that despite Nicholson’s choice to spend much of her life in Cumberland it did not isolate her from current debates. In the 1920s she was one of Britain’s leading painters. She was friends with Mondrian, Gabo and Hélion. Paul Nash, Ivon Hitchins and Christopher Wood came to stay at Bankshead and in the 1930s she spend much time in Paris, seeing works by Picasso, Derain, Rousseau, Cézanne and Matisse. These influences she brought home, and that of the latter two are evident in her 1974 Helen’s Bunch in Helen’s Pot.

Colour rather than form would remain central and towards the end of her life she wrote to Ben: “I hope I have obliterated for you forever the old conception that colour must be slave to form and must be tacked down on the objects. I hope I have shown you that colour is the vital power out of which forms, objects, images, thoughts themselves, can be created”.

Her late prismatic paintings, like Triumphant Triangles and the vibrant Accord , show her moving towards abstraction. “What I have tried to do is paint pictures that can call down colour, so that a picture can be a lamp in one’s home, not merely a window. The density of the vision of light is what I would like to pierce”.

With her delicate mastery of colour she captured Cumberland in all its light, wide space, its chills, its dark nights, grey winds and mists; “Which of us knows that no sunlight can be expressed without a hint of the mystery?”