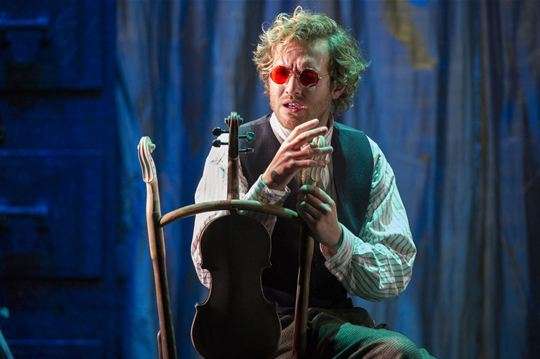 It’s one of those fatal-composition stories, like Mozart’s Requiem: worn out by 20 years of frantic work, and pretty ill too, Jacques Offenbach chose as a text for his last opera a story about a singer whose peculiar malady means she must give up singing or die. She chooses death – or it chooses her. Offenbach also couldn’t stop the music, and died before the opera was finished.

There’s more to this work than ironic autobiography; Hoffmann, which plunges the 18th-century writer inside three of his own stories, uses his aesthetic of gothic uncanny to pose slightly mocking questions about the artist, his pretensions, his role in  the world, and about operatic stereotypes (sick women, etc). Hoffmann is a shambling alcoholic, obsessed with the singer Stella, and beguiles the time till their post-show tryst with booze and storytelling. (By the time she emerges he is paralytic, and she goes off with someone else.)

In James Bonas’s staging for English Touring Opera the scene is shifted from old Nuremberg, and Hoffmann has become instead a ’30s film director – cue echoes of German Expressionism, plus plenty of Tim Burton’s Ed Wood. Everything is properly grotesque, including the lurking nemesis Lindorf, done up like Count Orlok and stalking about with panto-villain glee in Warwick Fyfe’s somewhat over-emphatic performance.

Bonas and his designers (notably Mark Rowland, whose lighting is all flickering atmosphere) have done a great job of recreating the peculiar ethos of Hoffmann’s stories. The most successful scene is the middle act – the story of Antonia, an adaptation of Rath Krespel – about the fatal singer, full of the heaviness of its faded sadness; the strangeness, the dreamlike combination of inconsequentiality and desperate compulsion, the creeping panic of children lost in the dark – it’s all here. And this is where Ilona Domnich, who sings all three heroines, is at her best, finding all the role’s melancholy and singing with a really pure sweetness; she’s a touching performer, even if the voice is not the biggest. The show is performed in English, but Domnich is allowed to sing Antonia’s delicately sad song ‘Elle a fui, la tourterelle’ in French, which rather makes you wish for more.

Elsewhere things get a bit weird for their own good, notably the Olympia scene (from Der Sandmann) wherein the poet’s literal rose-tinted specs make him fall in love with a freaky alien puppet, uncomfortably manhandled about the stage. The final scene too, centred on the Venetian courtesan Antonia, never really gels. But Bonas’s stagecraft is always solid, and as in his previous shows a strong visual imagination is joined with some really slick and funny theatrical moments: Offenbach may have intended a semi-grand-opera, but it’s also a comedy – if a black-bordered one.

ETO’s tour of three fin-de-siècle French classics – Werther and Pelléas et Mélisande are the others – uses severely reduced orchestrations, though conductor Philip Sunderland gets some real style out of his 11 players; they fall short of the necessary musical weight at some climaxes, but the mix of cute French operetta and something much darker and German is nicely managed. The single most notable thing about this striking show is the tenor Sam Furness, whose unstinting portrayal of the messy Hoffmann, physically and vocally, brings the genuine ring of big opera to the small stage; Hoffmann’s upwardly-modulating, striving melodies are all romantic ardour, his duets with Domnich genuinely passionate.

There is much besides – Matt RJ Ward’s funny turn as the old servant Frantz, Louise Mott as Nicklausse holding things together and (as Muse) impelling Hoffmann onwards through his fertile self-destructiveness: “His wounds are not in vain – they feed the soul!” she gloats. Who cares if he ruins himself? Art is the thing, the artist merely the throwaway tool.