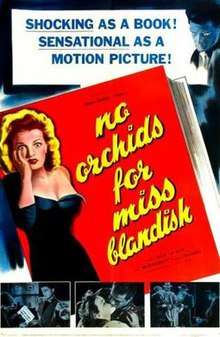 A film which gave the BBFC something of a headache in 1948. It now seems hilariously awful but was considered then to be just awful.

The Critics’ Circle is not the only centenarian on the block. It’s been a hundred years since the classification of films started and the Soho Square based British Board of Film Classification is happily marking its anniversary.

The Circle met some of the examiners for lunch recently to mark our joint antiquity and to learn more about their work. Marianne Gray was there.

She says that thanks to the BBFC we know, from the doubly signed certificate that appears on the screen at the start every film, what age the audience must legally be before they can see a film, video or DVD. The law says that every film must be classified and the Board, a non-profit-making body funded by the fees it charges for doing the work, handles
around 100 major suppliers who submit material for classification throughout the year. When the Board began films had to be censored if, for example, officers in British regiments were shown in a disgraceful light, or men and women were in bed together. Scenes of marital infidelity, semi-nude dancing, scenes sympathetic to criminals and painful insistence on realism in death bed scenes were also subject to being cut.

Marianne asked the BBFC’s senior examiner, Craig Lapper  what had transpired since the days when the greatest
fear going to the cinema was  not what they would see on screen but that the film, being inflammable nitrate film stock,
would burst into flames and burn the place down? He explained the Board was founded with two basic rules – there should be no nudity on screen and no materialisation of Christ. It wasn’t long, however, before it realised these rules were going to be insufficient and a list of grounds for deletion was created. The list’s contents have varied with time but it still includes restrictions on cruelty to animals and the modus operandi of criminals. Other examples of what used to be unacceptable, however, appear quaint and even ridiculous today.

The 43 grounds for deletion in 1916 included vitriol throwing, scenes set in disorderly houses, vulgar accessories in the staging, indecorous dancing and scenes likely to bring into disrepute British prestige in the Empire. Probably the most controversial aspect of the early grounds for deletion was the clear element of political censorship. For example scenes
depicting the “relations between  capital and labour” were prohibited, as was anything that could be construed as “Bolshevist propaganda.”

With coming of sound there were films like Dracula and Frankenstein that were not suitable for children and some people argued there should be an H certificate for Horrific and a D for Disgusting. The outcome was the X certificate was created.Massive liberalisation has occurred since then in terms of he type of content permitted.The first approved
showing of a penis was in Pasolini’s Theorem in 1968 (it did not belong to the film’s star Terence Stamp) and the first flash of female public hair was in Antonioni’s Blow Up in 1986. Foreign film-makers could, of course, and still do, get away with a lot more in their films.

So who does the work?

The Board’s examiners, a group of around a dozen professionals, range in age from 30 to 50 years, and some are married, some are parents, some are in relationships.Their guidelines are kept in line with public opinion through
regular consultation exercises every four or five years and are somewhat more lenient now than in the past. The criteria according to Lapper are clear – adults should be free to chose what they see, providing it remains within the law and is not potentially harmful to society. Guidance is given through seven classifications – U, PG, 12 and 12A, 15, 18, R18. (18 is what was the X certificate)

“We don’t cut the films ourselves,” he says. “Rather we provide a detailed list of the material that needs to be removed, often to obtain the film company’s preferred classification, using precise time codes if necessary, which mean we can be
precise to a 25th of a second. “It is quite tough work, but it is always challenging. It was probably somewhat easier when the grounds for censorship were things like workhouse officials shown in an offensive light or anything likely to wound the susceptibilities of our Allies.”

Something that is surprising is a distributor is entitled to introduce substitute footage to replace the material Board has asked be removed. The result – sometimes the “cut” version is longer than the original.