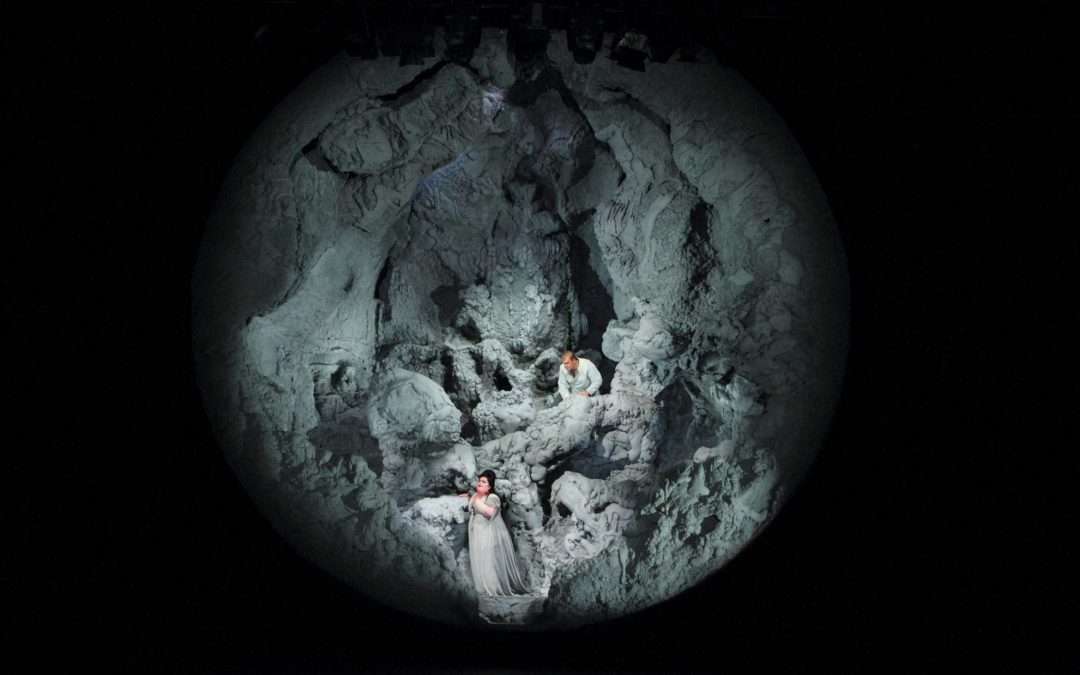 Swimming in a sea of troubles, and threatened with further funding cuts, ENO desperately needed a gold-plated success with this Tristan. In the event, the evening is moving and memorable, with proper attention given to every element of Wagner’s tragedy.

Kapoor’s sets are simple and striking. A golden pyramid suggesting the prow of a ship and its hold, divided into three sections by giant ribs, provides the setting for Act 1. The second act is played out inside a vast rocky cave, modelled on a volcanic geode, earthy and womb-like. The cave reappears in Act 3, viewed through a boulder-shaped aperture that seems flat until a lighting shift dispels the illusion – one of the staging’s most surprising and effective moments. It doesn’t take a psychoanalyst to read the progression of these archetypes from male to female, culminating in a synthesis of the two in Act 3, but the symbolism works. In the first act the designs annoyingly block sightlines whenever the protagonists move upstage.

Kramer tells the story straight and his departures from Wagner’s directions are generally worthy. Confining the lovers to psychiatric beds surrounded by doctors after their discovery by King Marke underlines the madness of the situation, even if it does make the king’s lament sound outrageously self-absorbed. It was also striking to see Brangäne reduced to a ragged and balding crone in Act 3 – usually she seems untouched by her decision to administer the love potion, from which so much misery flows. Less successfully, Kramer’s attempt to inject humour into Act 1 falls flat: Kurwenal and Brangäne, dressed up as a commedia dell’arte duo, provide an absurd foil to the drama unfolding between their masters. Where Kapoor’s sets achieve their effect through simplicity and beauty, Christina Cunningham’s first-act costumes are overblown.

Stuart Skelton makes an outstanding UK role debut as Tristan opposite the American soprano Heidi Melton. They are well-matched and imposing, both vocally and physically, though Melton took time to warm up. Her fulsome, dramatic soprano is best when not being pushed at the top of the register, and she delivered Wagner’s text with real intelligence; so it was possible to forgive the vocal unpleasantness that marred some of Isolde’s most passionate climaxes, though things improved as the evening wore on, with Gardner toning down the orchestra so she didn’t have to belt.

Skelton is an impressive Tristan, his powerful but unforced tone ideally suited to Wagner’s hero. He’s also an intelligent actor and draws a compelling portrait of Tristan’s descent from proud protector to broken lover. His long Act 2 duet with Melton successfully runs the gamut from lustful ecstasy to post-coital transfiguration – a real highlight, despite being performed in its cut version. The lighting here is also spectacular: bursts of shimmering sparks leap from the enchanted lovers as they move around the darkened stage.

Craig Colclough (Kurwenal) and Karen Cargill (Brangäne) are both vocally and dramatically assured – Cargill is gorgeous in her Act 2 offstage watch-song, while Colclough carries the opening of the third act with aplomb; but the most powerful performance of the evening was given by Matthew Rose as King Marke. Striding the stage like a wounded lion, Rose brought out every nuance of his wonderful Act 2 aria, perfectly capturing its mix of dismay and dignified sadness.

Underpinning all this, the ENO orchestra and chorus sounded superb, clearly enjoying the return of their former music director Ed Gardner. His well-paced account of the epic score was driven yet supple, substituting volume with intensity so that the singers were given plenty of support but never obscured. Melton already sounded slightly tired by Act 3, yet under Gardner’s guidance she still gave us a Liebestod that touched on the transcendent.