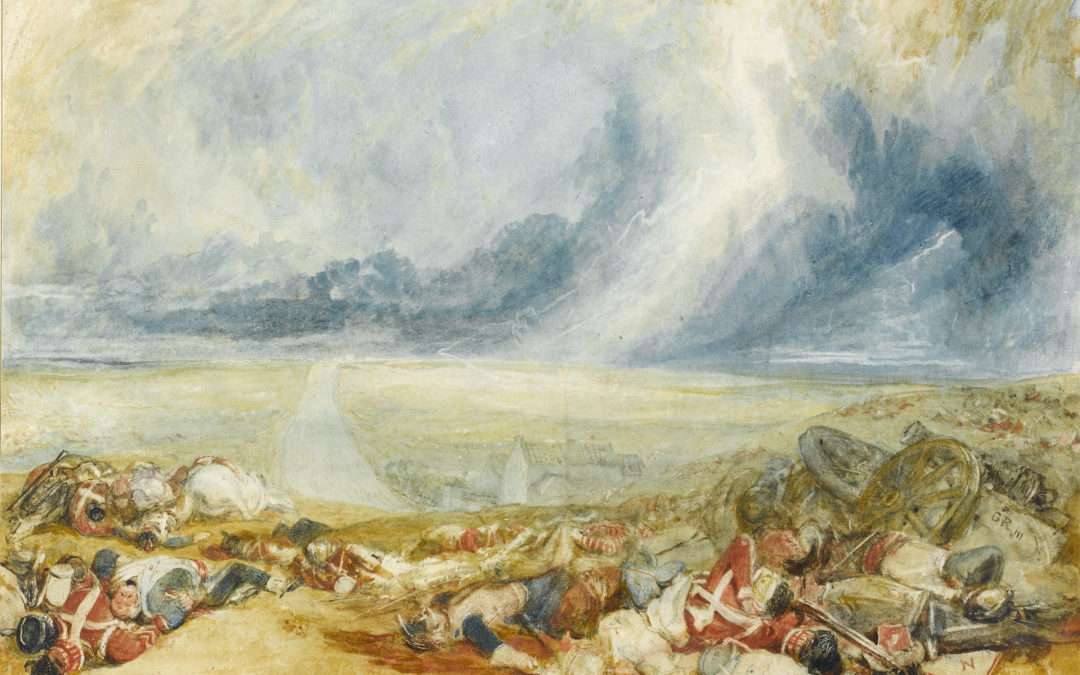 The Field of Waterloo - Watercolour over graphite with scratching out on paper, c. 1818

The public know Turner as a painter of landscapes capturing light, weather, mist, storms and, in the words of his fellow artist John Constable, of painting with ‘tinted steam’. Yet Tate Britain’s current exhibition Turner’s Modern World reveals the artist in a whole new way, as a remarkably sharp observer of the political, social and industrial changing world in which he lived.

Born in 1775, the year the American War of Independence began, Turner was 14 in 1789, the year of the French Revolution. He was 18 when France’s revolutionary-republican government declared war on Britain in 1793, 29 when Napoleon Bonaparte became France’s first Emperor and 40 at the time of Waterloo. By 1851, when he died, he had seen the building of the Crystal Palace for the Great Exhibition of that year. It was an exhibition that showcased Britain as a new global power through displays of a spectacular range of technological innovation. No one of any intellect could have failed to note the turbulence of such changing times. Yet we are told that Turner was rare in depicting so many modern subjects.

He began his training at the Royal Academy school in 1789, and as a student was taught to avoid subjects regarded as contemporary or political. Other artists toed the academic line, spurning the depiction of life-changing developments in politics, science and literature. Art was to be above all that. But not so Turner, he made the modern his central subject matter.

The exhibition and abundantly-illustrated catalogue are presented chronologically, with sections on signs of the times in Turner’s early work, his depictions of war and peace, ‘Modern Thought’; Turner and his Literary Contemporaries, his observations on the changes the changing times had on the home front, causes and campaigns, leading to works that refer to the reform of parliament, freedom of expression and slavery. The exhibition culminates in a room on ‘Steam and Speed’, full of such glorious favourites as Rain, Steam and Speed – The Great Western Railway and Snow Storm – Steam-boat off a Harbour’s Mouth.

From his earliest years he was a traveller, journeying through Britain and all over Europe, embracing the use of the new steamboats and trains in these travels. He observed and drew the machines that the Industrial Revolution brought to the workplace, fuelled by steam power, and that generated the great redistribution of the population from rural land to newly industrialised cities at an extraordinary speed of change. Those who supported his career, aristocrats and landed gentry, were often also entrepreneurs, mining magnates, canal builders and pioneering agriculturalists. Later, his patrons would be merchants and industrialists who had made their money from these industrialised trades.

What were Turner’s own views on the changing times? Other than his choices of subjects, the exhibition’s curators feel it is hard to say. He left few written indications. We do know he appreciated practical improvements, as previously noted he using steamboats and trains in his travels and he installed a plumbed lavatory in his home. But the opinions of his friends and benefactors must have been pivotal to his own thinking and he enjoyed friendships with some of the best pioneering minds of the day; friends whose research turned received ideas on their head, changing what was thought about the age of the earth, the nature of the physical world and the forces acting on it. He attended lectures at the Royal Institution, where the arts and sciences met. He was a founder member of the Athenaeum, the club whose membership was based not on inherited privilege but on intellectual achievement.

Still, his depictions of steam technology alarmed many of his contemporaries. Of Rain, Steam and Speed with a train in its centre, the novelist William Makepeace Thackeray, reviewing the painting said: ‘The world has never seen anything like this picture.’ For some painting a train was just ‘insane’; The Times put it somewhat more gently, that the ‘railways have furnished Turner with a new field for the exhibition of his eccentric style’. Much the same was said about his paintings of the whaling industry. Critics were no more accepting of his depictions of more serious subjects and dealt with their disturbing feelings on paintings such as Slave Ship (Slavers Throwing Overboard the Dead and Dying – Typhoon Coming on) by making fun of them. Keelmen Heaving in Coals by Night, painted for the Manchester industrialist Henry McConnell, elicited the snobbish comment that it was a ‘glorious moon-light wasted on dingy coal-whippers’.

Perhaps these critics were too bound to the past to see glory in the future. Yet if common workmen were unworthy subjects for art, others lauded The Fighting Temeraire as ‘a noble human being’, a ‘venerable victor in a hundred fights’ and ‘the most wonderful of all the works of the greatest master of the age’ and, for a correspondent of Ruskin’s, Turner’s ‘first, almost prophetic idea of smoke, soot, iron, and steam’.

We do know that Turner’s views on certain matters changed. At the start of the Napoleonic wars he depicted war quite nationalistically. His painting The Victory returning from Trafalgar, in Three Positions, c. 1806, shows the ship undamaged, sailing in the wrong direction and not with the ensign at half-mast as she would if carrying Nelson’s body. But by the time he had painted The Field of Waterloo in 1818 (see top image) three years after the battle, it was the human cost that was his subject.

His approach to slavery changed too. In 1805 he bought a £100 share in a scheme that proposed funding a cattle-breeding farm in Jamaica worked by slave labour. The scheme did not go ahead and all the investors lost their money. By the late 1820s Turner had become an Abolitionist and Slave Ship (Slavers Throwing Overboard the Dead and Dying – Typhoon Coming on) unflinchingly shows the inhumanity of the trade. (Slave Ship is regrettably one of only two paintings in the show that have not made the journey across the Atlantic due to its fragile condition and Covid-19)

As clearly the most observant artist of Georgian and Victorian England, what would Turner have made of our own troubled world? Pandemic, climate change, pollution, migration, deportation, refugees, trafficking, his country’s identity and place in Europe and the world changing, fires, floods, and what is to replace transport fuelled on fossil fuels?

This exhibition throws a whole new light on Turner and, whatever you thought of him before, when the Tate reopens you will find a whole new Turner.