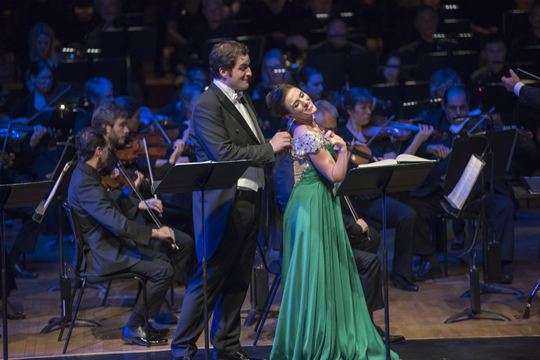 Among Italian operas à la française, Zazà has fared particularly badly. Though more credible than Cilea’s Adriana Lecouvreur and better structured than Puccini’s La rondine, Leoncavallo’s tale is a domestic doodle with as little action as Waiting for Godot. And yet, as Opera Rara’s latest archaeological dig has revealed, musically it’s a feast, drenched in lushly melodic colours that favour the waltz and sway with a heady, schmaltz-free sentimentality.

Cabaret singer Zazà (Ermonela Jaho) embarks on a passionate affair with businessman Milio Dufresne (Riccardo Massi), unaware that he is married. An encounter with the cad’s young daughter (15-year-old Julia Ferri, touching but unsubtly amplified in a spoken role) prompts Zazà to send him packing.

Leoncavallo’s four-act traversal of this slender material requires an extravagant orchestra and any number of minor characters. The third lead is Zazà’s singing partner Cascart, her counsel in affairs of the heart, affectingly portrayed by Stephen Gaertner. The American baritone’s warm, forthright delivery embodied the character’s dependability as the voice of reason. For the rest, Zazà is comprimario heaven and Opera Rara fielded stylish cameos from Kathryn Rudge and Fflur Wyn, inter alia. Rebecca Lodge stepped out of the BBC Singers at 24 hours’ notice and sang Anaide, Zazà’s mother, with aplomb.

Neither Jaho nor Massi was flawless but together they made a compelling case for narrative threads too frayed even for a TV soap. The Albanian soprano embraced its extremes as though her life depended on it. Emotionally cloven in her character’s struggle between passion and duty, at times she sacrificed intonation on the altar of dramatic engagement, and got away with it. Jaho’s achievement was all the more impressive since Massi, though an idiomatic and attractive tenor, was an unyielding partner. It took Leoncavallo’s sexy orchestrations to lubricate their erotic first-act scena, most memorably in violinist Stephen Bryant’s nimble depiction of the fingers that unlace Zazà’s bodice.

With battalions of the BBC Symphony Orchestra at his disposal, the excitable Maurizio Benini was never likely to hold back. He pushed the dynamics delightedly, leaving singers struggling in the wash of sound. Not that it bothered Nicky Spence, a booming young tenor who gets better with every performance. As the testy impresario figure, Courtois, he could have outsung a jet on a runway.

It was Ermonela Jaho’s night, though. She was the heart of the action throughout and never once lost focus. Any number of moments will linger from her lived-in performance: a quietly spun legato as her lover receded into the distance, a fiery duet with Cascart that led to his spilling a key secret, anguish at the sight of an innocent girl whose life she could have wrecked. “No one will take your father away,” she blurted to the child in a surrender to cruel reality, and Jaho showed how much it hurt.