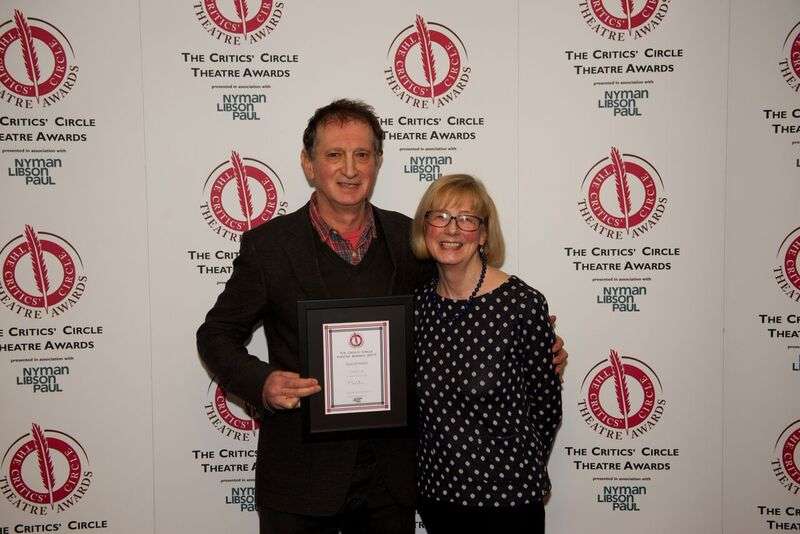 The Drama section decided to set up a new special award for services to the theatre which could go to anyone who has contributed to the theatre in Britain. It is not a lifetime achievement award because they tend to celebrate a career that is either over or at its height. It is for work in progress, work achieved, and the first award was presented as part of our 2017 awards on 30th January, 2018.

This is the address critic Heather Neill gave when presenting the award:

“The first recipient of the new annual Drama Section Special Award goes to an anthropologist who has spent quite a bit of the last two decades ensconced in a former butcher’s shop. This anthropologist is also, however, a playwright, director and producer and that ex-butcher’s shop is at the heart of the Young Vic. I am, of course, talking about David Lan..

“During his 18 years as artistic director, from which he is stepping down this week, the Young Vic has built on an earlier reputation for being warm-hearted, energetic and rooted in its community. But David Lan has also overseen a period of remarkable innovation and development, making the Young Vic a hub of international excellence. Think of productions such as the overwhelming A View from the Bridge, directed by Ivo van Hove, or the painfully exact A Streetcar Named Desire directed by Benedict Andrews, or Simon Stone’s devastating Yerma starring Billie Piper. Or The Scottsboro Boys, A Doll’s House, Wings or Skellig – so many. Then very recently, Good Chance Theatre’s The Jungle, an urgent personal and political examination of the plight of migrants, and, just opened, a revival of Tarell Alvin McCrany’s poetic hymn to male friendship, The Brothers Size. Some of these were co-productions. There have been close relationships too with other theatres: the Belarus Free Theatre, which found a home at the Young Vic, Vesturport from Iceland with their circus-style Romeo and Juliet, the Bouffes du Nord in Paris and the operatic Isango Ensemble from South Africa.

“Importantly, for more than a decade, the Young Vic has provided training and opportunities for directors – people such as Natalie Abrahami, Carrie Cracknell, Bijan Sheibani, Joe Hill-Gibbins and Matthew Dunster. This theatre’s influence is now widespread. There have been transfers, of course, and numerous awards – quite a few presented in this very room. The Young Vic building itself had to be rescued. And now that butcher’s shop is embedded in a theatre with three flexible auditoria and a café bustling with a cross-section of London.

“Almost more important than any of this is that David Lan’s diverse programming, emotionally and intellectually challenging and responsive to the moment as it is, is enjoyed by the most diverse and engaged audiences you are likely to find anywhere. We are hoping for another chapter, David Lan, in due course!

“For now, congratulations – and thank you.”