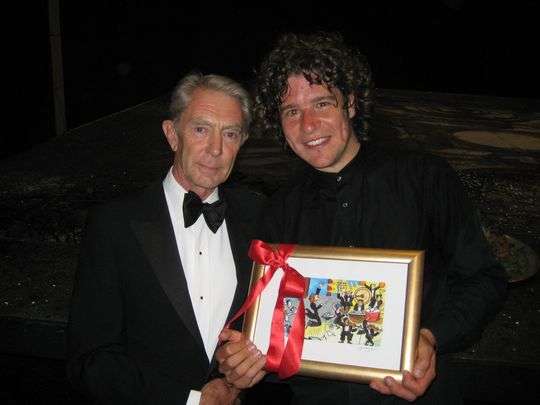 The first two presentations of this year’s Music Awards for Exceptional Young Talent have taken place and were extremely happy events. We thought it would be a good idea to link the presentations to performances that the recipients were giving over the past couple of weeks, and, thanks to the enthusiastic and very helpful participation of the venues involved, the audiences were able to share in the celebrations as well.

The Russian-born violinist Alina Ibragimova, who gave such a memorable series of Beethoven’s violin sonatas with the pianist Cédric Tiberghien at London’s Wigmore Hall last year, was playing Mozart’s Violin Concerto No 4 with the Royal Liverpool Philharmonic Orchestra under Vasily Petrenko on Thursday 26 May.   We followed her there and handed over the award on stage just before the interval.   This was scarcely a surprise à la This Is Your Life, since Alina Ibragimova knew, the audience had been forewarned in the programme book and BBC was broadcasting the concert and the ceremony live on Radio 3, but the spontaneous ovation for her was a further sign that the packed house had relished her Mozart and that the award was richly merited.

The conductor Robin Ticciati was particularly singled out for his performance of Humperdinck’s Hansel and Gretel at Glyndebourne last year and also for the inspiring work he has done as principal conductor of the Scottish Chamber Orchestra in Glasgow and elsewhere.   He is at Glyndebourne again this year, conducting Mozart’s Don Giovanni, and we presented him with his award during the final curtain call of the performance on Friday 3 June.   Warmly applauded by the audience, he received the award with a broad beam, and in a characteristically self-effacing speech thanked the orchestra – on this occasion the Orchestra of the Age of Enlightenment – acknowledging their intrinsic involvement in what a conductor does.

On the set of Don Giovanni at Glyndebourne.   Robin Ticciati with his Music Award for Exceptional Young Talent © The Critics’ Circle

For our awards we have commissioned four cartoon paintings from the artist  Jeremy Swan.

The picture presented to Alina Ibragimova © The Critics’ Circle

Jeremy Swan studied at the National College of Art in Dublin.   He worked as a scenic artist in the Gate Theatre founded by Hilton Edwards and Michael MacLiammoir.   In television his work as a director involved story-board pictures for such legendary children’s programmes as Jackanory, Rentaghost, Fraggle Rock and the Blue Peter pantomimes.   His exhibitions in London, Salisbury and elsewhere have attracted wide and enthusiastic followings, and his pictures are in collections throughout the UK, France, Italy, Spain and the USA.

The picture presented to Robin Ticciati © The Critics’ Circle