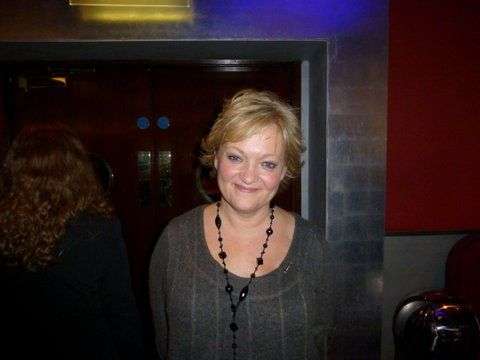 Maria Friedman, director of Merrily We Roll Along at the Awards.

The Young Vic was the big winner at the awards yesterday, as Hattie Morahan picked up the Best Actress award for ‘A Doll’s House’, Benedict Andrews picked up the Best Director award for ‘Three Sisters’ and Miriam Buether picked up Best Designer Award for ‘Wild Swans’. Critics also recognised the extraordinary achievement of the Globe to Globe season in which all of Shakespeare’s plays were performed by thirty seven different international companies in the space of six weeks at Shakespeare’s Globe. It was a triumph of logistics as well as artistry.

Lolita Chakrabarti’s ‘Red Velvet’ at the Tricycle gave new artistic director Indhu Rubasingham a flying start as Chakrabati won the Most Promising Playwright award and Adrian Lester won the Best Actor award for his performance as Ira Aldridge. Lester was a recipient of the OBE in the New Year’s honours as was Michael Billington who presented the award to him. The National Theatre picked up two awards. Simon Russell Beale won Best Shakespearean performance for ‘Timon of Athens’ and the Best New Play was Lucy Prebble’s ‘The Effect’. Denise Gough won the Jack Tinker Award for Most Promising Newcomer and the Best Musical was won by ‘Merrily We Roll Along at the Menier Chocolate Factory (the only unsubsidised theatre to win an award).

As usual, Arthur Smith provided a welcome warm up, concentrating his efforts on tickling the fancy of Libby Purves and Blanche Marvin sitting in the front row with a string of filthy jokes and a few that felt strangely familiar. The Chair of the Drama Section, Mark Shenton, wondered whether critics would be around much longer but, on this occasion at least, the recipients showed that, however fractious the relationship between theatre and critics can be, critics still had their uses. Picking up the award for an absent Benedict Andrews, David Lan, the artistic director of the Young Vic, said that he was immensely proud of ‘Three Sisters’ but that he was surprised that ‘you lot’ had got it. He spoke passionately about the vital role subsidy played in enabling him to take risks. All three productions honoured at the awards had been gambles, in this case ones that had paid off both critically and with audiences but they could all too easily have failed. Dominic Dromgoole, artistic director of Shakespeare’s Globe, said he was surprised that ‘twenty years of charm and civility had paid off at last’. Most critics have received a vicious missive from Dromgoole in response to one of their reviews. Adrian Lester made the surprising confession that he read every review and that sometimes he even learnt something. However, ‘Red Velvet’, in which he played the American actor Ira Aldridge, showed the London critics of 1833 at their worst unable to bear the sight of a black actor ‘pawing’ Desdemona. In possibly the most moving speech, Lucy Prebble praised those critics who acknowledged their own failings in their reviews, saying that what she had learnt from watching her own plays being performed was that audience attention was directly commensurate to the amount of personal commitment she put into the writing.

Prebble’s speech was the last of a relaxed and enjoyable occasion, very different from other award ceremonies. Less glitz, for sure, but far more content. Many thanks to Catherine Cooper for organising the event.

The Critics’ Circle is extremely grateful for the generous support of Nyman Libson Paul and Delfont Mackintosh Theatres.

The Effect by Lucy Prebble

Cottesloe Theatre at the National, London, in a co-production with Headlong

Merrily We Roll Along

Hattie Morahan in A Doll’s House

Olivier Theatre at the National, London

Denise Gough in Desire Under the Elms

Shakespeare’s Globe for Globe to Globe