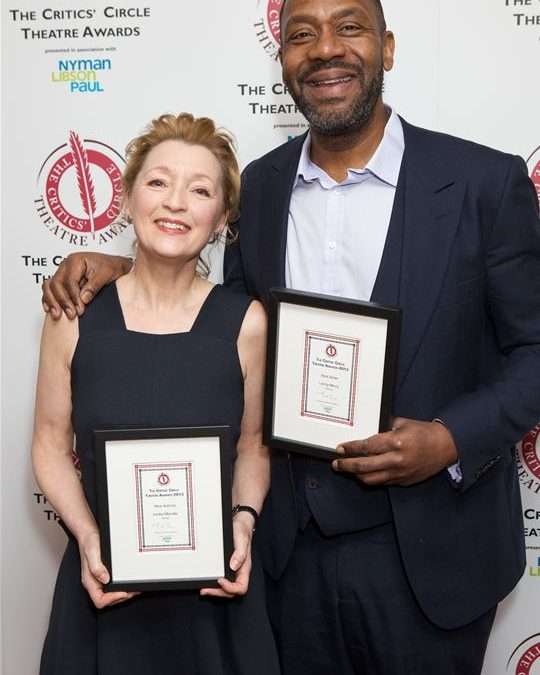 The 25th Critics’ Circle Theatre Awards were held on January 28 at lunchtime at the Prince of Wales Theatre. There have been times in the past when a lack of a sponsor has jeopardised the future of the awards but thankfully we are now fortunate to be presenting them in association with Nyman Libson Paul and with the support of Delfont Mackintosh Theatres. Arthur Smith has been a much-loved warm-up for many years, but never has he made a more spectacular entrance than he did last Tuesday in a glittering silver onesie. References to the controversial Evening Standard Awards were strangely muted, although many must have been delighted to see Charles Spencer, who was one of three critics to resign in protest from the Standard panel, present the Best Actress award to Lesley Manville.

It was a year for the Critics’ Circle to feel pleased with itself, knowing that these awards are chosen by those who are out in the field, seeing plays night after night, unmoved by glamour or reputation. Over 25 years, there must have been some omissions and some mistakes, but looking at the list of previous winners, the Circle has a better reputation than most for spotting new talent, right from the very first ceremony in 1989 when Sam Mendes won the Most Promising Newcomer other than a playwright award in 1989. For the first time ever, Rory Kinnear won both the Most Promising Playwright (awarded jointly) and the Best Shakespearean Performance for Othello. The Almeida did well in Michael Attenborough’s last year, winning awards for Ghosts and, in particular, Chimerica, which started at the Almeida, and which won three awards for play, direction and design. There was a feeling at Tuesday’s event that a new generation of critics and theatremakers were taking over. In the present climate, it seems that the theatremakers have more chance of fulfilling their talent than the critics. Mark Shenton’s opening speech can be read on the Home page. Thanks, once again, to Catherine Cooper for organising a very cheerful event.

The John and Wendy Trewin Award for Best Shakespearea Performance

Rory Kinnear for The Herd

Lyttelton Theatre at the National, London