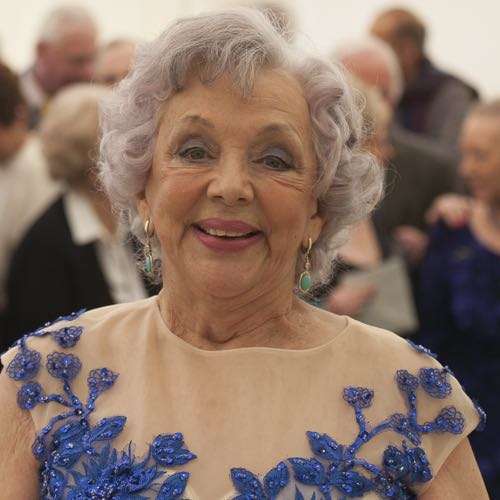 At 91 Thelma Ruby is going back on stage in her one woman show to launch the Festival 46 season at the King’s Head theatre in Islington later this month. Star of revue, musicals, films and plays – she has done pretty well everthing in her long career except dance in the ballet – she approves of the little theatre. It pays people who perform there the Equity rate, although the last time she did they not pay. Her career was at it peak in the sixties, she says, when she was starring in Fiddler on the Roof with Topol and in Cabaret with Judi Dench, the actor she has enjoyed working with the most. She refuses to say who were the difficult ones, but admits to thinking of at least two names. “I emjoyed all my leading men,” she adds, then collapses in laughter at what she has said.

“I have not done my one woman show for two years and I thought then that it would be my farewell performance, but here I am at 91! I asked my singing teacher – I still go once a week – and she said ‘Go for.’ In the show I talk about my life in the theatre. I was terrinly shy as a child. I wanted to be an actress – my mother had a beautiful singing voice – and there were two mirrors in my bedroom. I used to practice stage acting in front of one and film acting in front of the other. We were evacuated to America during the war and I got a scholarship to Finch Junior College in New Yorl. They asked what I wanted to be and my father said he thought I should be a writer. But the Principal said they had a fine theatre arts department so for the next two years I studied there and went on the stage.”

One of her big successes was the legendary revue For Amusement Only which ran for two years from 1956 to 1958 at the Apollo and had a cast of some of the funniest men of the day, including Ron Moody, Hugh Paddick, Ronnis Stevens and Barry Took.

“In those days you got no time off,” she says. “Now you have to take a holiday and give the understudy a chance. Ron Moody and I never missed a performance. Several of the women init aere still around and we meet sometimes for lunch, but all the men are dead.

“Being in a long run is hard work and sometimes, when it is not such a good audience and you do not get your laugh, it can be difficult. But you have to say to yourself – this audience has never seen the show before so I must keep it fresh and sparkling. The biggest problem is giggling when things go wrong. When they do never look the other actors in the eye.

One of the men in her life – she had a long and happy marriage to the director Peter Fry – was the Hollywood star, Tyrone Power. “That was a very glamorous time,” she says. “I was the leading lady in For Amusement Only so I had the Number One dressing room and he came back stage. Lots of interesting people did. Charles Laughton came and people like Van Johnson and Jack Hawkins. I actually met Tyrone at the London Palladium. We were doing a charity show, Night of a Hundred Stars, and lots of well known people were doing the chorus line and he came on and sang Chatanooga Choo Choo in front of us while we sang Woo,woo, woo. It all went well at the rehearsal umtil he got to a line in the last verse about meeting “a certain party at the station” and he sand “at the wedding.” The director told it was ood until he got to the wedding. “That’s life, “Tyrone replied. “So I met him and we had a little romance.”

Her other shows include playing Goneril at the National Theatre to Michael Hordern’s Lear, appeating with Phil Silvers in A Funny Thing Happened on the Way the Forum, playing Mistress Quicly in Chines at Midnight opposite Orson Welles as Falstaff, the musical Once Upon A Mattress with Max Wall and two Palladium pantomimes – Sleeping Beauty and Dick Whittington – with Charlie Drake, Norman Wisdom and Bruce Forsyth. It has been a life in the theatre in the fullest sense.

“I am going to drive to the King’s Head to look at the stage – I am a little it worried about the placing of the seats. I want to be able to look at the audience, for them to see my face, not the back of my head. I worry because they seem to have changed the layout since I last played there.

“So here I am at 91. I live alone – I am lucky. I can cope. I can shop and get good and get my meals. I do not go to the theatre or cinema much now, but I am addicted to watching television – you can find lots of good things there.”

Thelma Ruby is appearing as part of the King’s Head’s two week Festival 46 a curated season of plays. Her show is being performed at 1.30pm on Sunday July 24 and Sunday July 31.