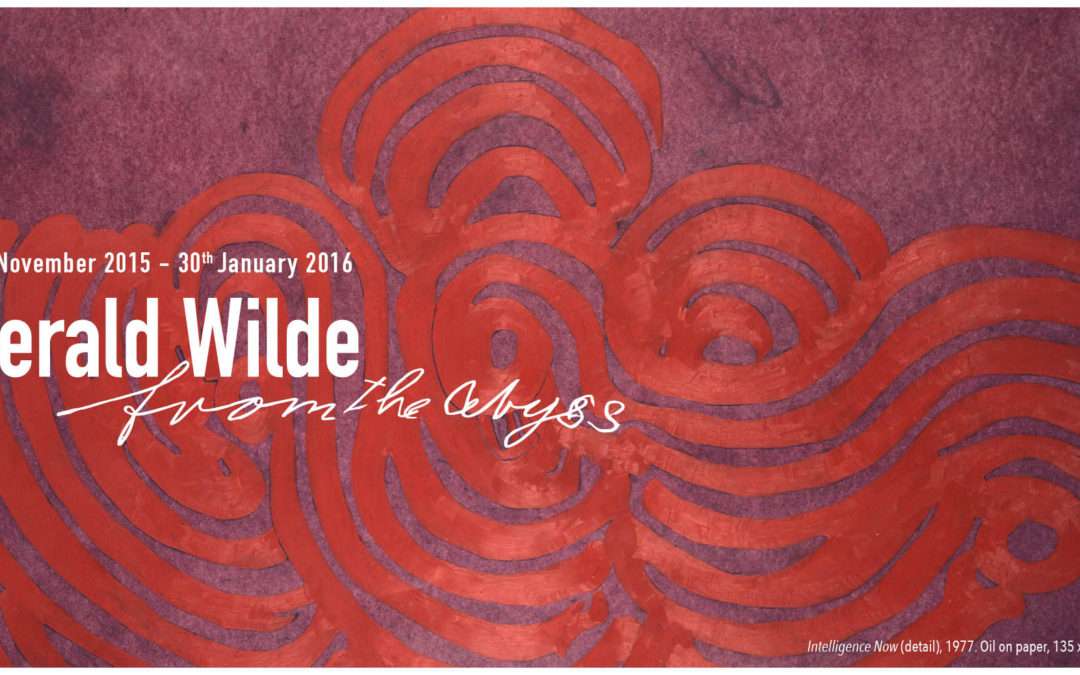 Here is October Gallery offering another chance to evaluate the achievement of Gerald Wilde with a wide selection of his work.  While the paintings and drawings of British abstractionists of the post-Second World War period — such as Terry Frost, Patrick Heron or Victor Pasmore – are now familiar in major auction houses, public and commercial galleries, Wilde remains relatively unknown and certainly underrated.

This was not so during his life.  Then his pictures were widely admired and respected by fellow artists such as Frank Auerbach and Lucian Freud; by critics John Berger, William Feaver, Tim Hilton, Martin Harrison and David Sylvester; and was collected by such shrewd men of taste as Kenneth Clark, Edward Marsh and Peter Watson.  Three paintings by Wilde are in the Tate, others held by the Arts Council and provincial collections.  What they hold encompasses a group of works that indicates, like the current October Gallery show, how Wilde refused to be confined to a style straightjacket.  Maybe that was partly his problem.

John Berger admired Wilde’s pictures because of “Their conviction and their amazing strength of line, devouring colour and interlocking shapes”.  For him they were “not abstractions.  They are painted with the passion and denial with which an artist might paint the belly of the woman he loves….  The trapped in all of us can respond to these works because they strive for release, and in all our recognition of this and of the loneliness and suffering involved we think – however rashly – of the word genius.”  For David Sylvester, Wilde’s work had “the exhilaration of a disaster just averted.”  And for the writer Joyce Cary, originally alleged to have drawn on Wilde to create the aesthetically anarchic artist Gulley Jimson in his novel “The Horse’s Mouth”, Wilde’s works belonged “emphatically to the category of great art.”

Born in London in 1905, believed wrongly to have been a son of Oscar Wilde, Gerald worked first in a solicitor’s office.  Although he had lost an eye in a childhood accident, he attended Chelsea School of Art from 1926-31 and 1932-34, under Percy Hague Jowett and H S Williamson.  His teachers included Henry Moore and Graham Sutherland, both strong advocates of his work.  A setback was destruction of early pictures in the Blitz but, after service in the Pioneer Corps, Wilde had produced enough for a first solo exhibition at the Hanover Gallery in 1948.  In 1951, he designed the cover for the catalogue of the Festival of Britain show Sixty Paintings for ’51.  Four years later, the Institute of Contemporary Arts gave him a retrospective.

The October Gallery exhibition is aptly subtitled “From the Abyss”, because Wilde had his problems.  For Nicolette Devas in her memoir “Two Flamboyant Fathers”, Wilde was “the Mad Artist….  His was a head of suffering, worse than any El Greco martyr.  A chronic derelict, he chose to be destitute, dressed in rags and never fed himself.”   In addition to his inability to handle money, there were alcohol and a casualness in disposing of his pictures.  On top of that, during the second half of the 1950s he spent time in a mental hospital subjected to electric shock treatment after which he abandoned painting, to re-emerge in the 1970s.

Wilde’s work has remained unseen in any major public space since an exhibition at the Serpentine in 1977, nine years before his death.  When the October Gallery opened in 1979, it chose Wilde as its first show and has continued to champion his output with several shows since.  The Millinery Works, Islington, displayed a good selection of pictures, under the title Gerald Wilde: A Forgotten Genius, in 2004.

In two large rooms, October Gallery is able to show his often big pictures to advantage, with an accompanying cased display of items associated with his career.  The pictures range over the unusual early realistic gouache The Brown Bedroom, of 1939; the dark oil Sunlight, of 1947; through the pastel and gouache Pompeii, of 1978, lighter in colour and mood; to the exuberant oil pastel Clown Fever, of 1984.  Wilde’s was a tortuous journey from the intensity of his early work – a place of unease, anger and conflict – to a final destination of reconciliation.