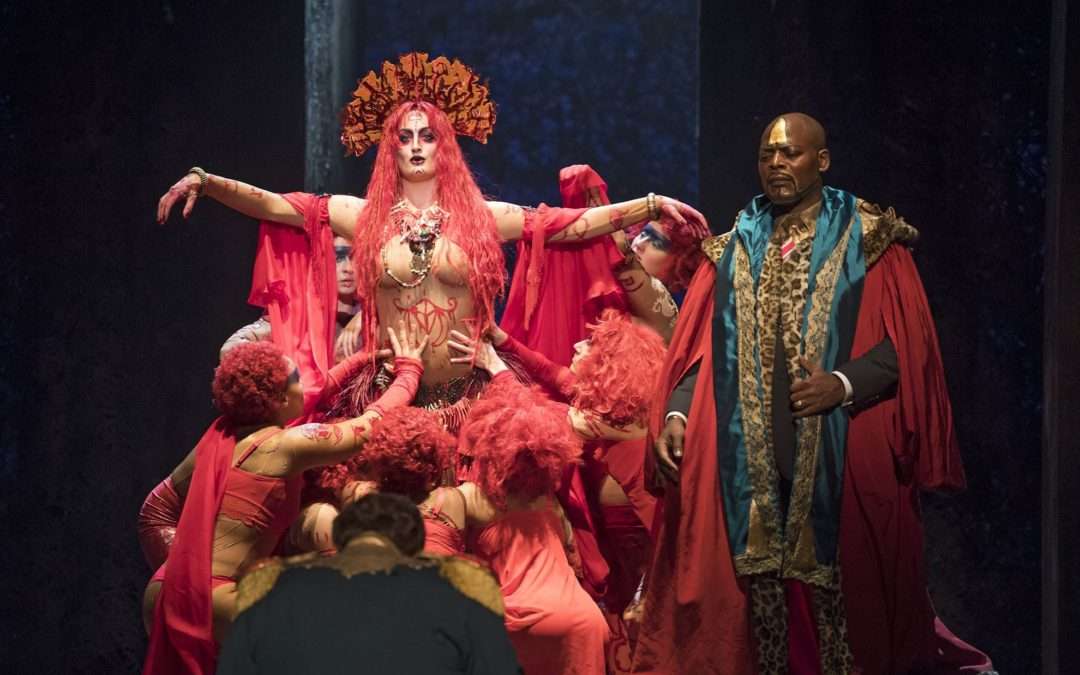 It is unclear, after the upheavals in the management and artistic direction of English National Opera, precisely who was responsible for engaging Phelim McDermott and his aptly-named theatre company Improbable to stage ENO’s new Aida. McDermott has no more grasp or experience of grand opera (of which Verdi’s wonderful work is a prime example) than have ENO’s current artistic director Daniel Kramer or the company’s about-to-depart chief executive Cressida Pollock. I am hoping that a single modest fee for “movement” was shared out between the accredited experts Basil Twist (who showed some people on stage how to make “silk effects”), Linda Johansson (who is named as “movement director”), and Elaine Tyler-Hall (in charge of “chorus movement”). One thing immediately obvious about McDermott’s production (and I’m not sure what he really did during rehearsals) is that its dire designer Tom Pye and the trinity of movement experts were definitely getting in each other’s way.

I think Mr Kramer may himself have encouraged the US-style folding of many flags ritually undertaken during the Grand March ceremony, which seemed to have more to do with dead Egyptians than with Egypt’s total victory over the invading Ethiopians. Pye’s cramped set-design was overcrowded with chorus in “improbable” costumes (by Kevin Pollard), including priests in trilbies and suits and ties, as well as extras in Star Wars-like commando uniforms. Matthew Best, singing and acting powerfully as the King, wore a white version of a 4-star US general’s suit. Latonia Moore’s persuasive Aida – though among the less tall on stage (including one well-muscled but very short and lively gymnastics expert) – was dressed in an unbecoming loose robe and a very tall hat (to aid identification perhaps). Michelle DeYoung’s Amneris (the worst sung performance of this great role that I have ever heard, with almost all the English text incomprehensibly distorted) wore on her first entry an extremely improbable white frock which made her look almost pregnant. Robert Winslade Anderson was rather impressive standing in as chief priest Ramfis in a suit as if on his way to negotiate Brexit. Musa Ngqungwana as Aida’s father Amonasro showed what a lovely warm heroic baritone he has, a musical pleasure plus decent acting.

Keri-Lynn Wilson conducted energetically but without the stylish assurance that might have remedied some of the preposterous antics on stage especially DeYoung’s overwrought Amneris. The 10-strong so-called “skills ensemble” demonstrated challenging acrobatics in the first two acts of ceremonial parades. But nothing in the staging of the events added up to convincing accompaniment for stars delivering the narrative that actually matters about torn loyalties and complicated loves. Latonia Moore’s Aida was touching and decently sung, but the top of her voice was not in perfect repair for her great homeland aria ‘O patria mia’. Gwyn Hughes-Jones made an honourably sung but not very vocally pleasing Radames: top notes more hard work than beautiful, with painfully illiterate English (“… with the glorious Egyptian army and I commanding…”) in Edmund Tracey’s translation.

The worst news, however, was that nobody in this cast (Brindley Sherratt as Ramfis being indisposed) had anything to do with the company and operatic tradition associated with the name English National Opera – and nor in truth did the director or conductor. Ms Pollock is credited with enabling ENO to survive. In fact it is nowhere to be seen, and I fear will never be resurrected.