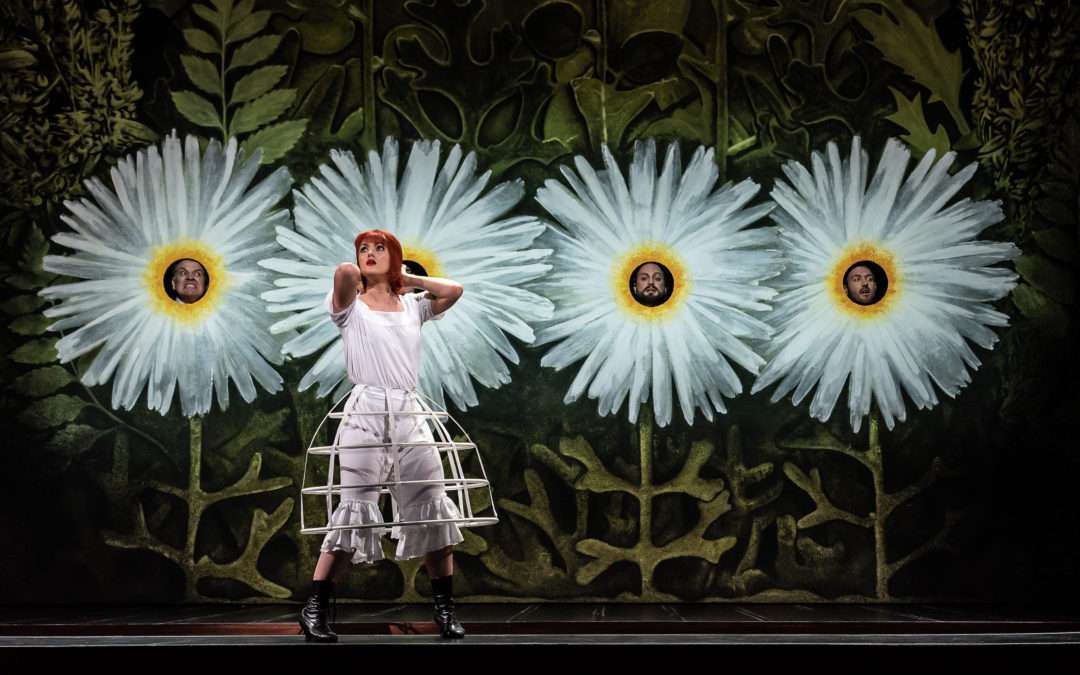 Gerald Barry’s Alice opera is less an adaptation than an invasion. The Irish composer takes Lewis Carroll’s Alice’s Adventures in Wonderland and its sequel Alice Through the Looking Glass and unleashes the full force of his madcap, surrealist imagination at them. Smashing and shattering the stories into brilliant pieces, he proceeds to reassemble them in stranger and stranger patterns – a musical mosaic of bewildering and intricate design. The effect is exhilarating, at times infuriating, but never less than utterly absorbing.

From the moment the White Rabbit looks at his over-sized pocket-watch and leaps into action there’s not a second to lose or a moment to draw breath in this 50-minute fantasy. Plunged headlong down the rabbit-hole alongside Alice, you find yourself pushed, pulled and chivvied (the Red Queen waits for no woman, and certainly no man) through a sequence of absurd encounters, which may or may not coalesce into a plot.

With over 50 characters, near-constant scene changes and a clamour of outlandish stage directions, Barry’s opera seemed all but unstageable at its UK concert premiere in 2016. But, matching the composer gesture for gesture, director-designer Antony McDonald pulls it off. His staging for the Royal Opera is charming without being twee, surreal rather than whimsical; there’s a sharp edge to both Carroll and Barry which is transformed here in a dull hum of menace that follows Alice on her noisy quest across the chessboard.

Video trickery is kept to a minimum; drop-cloths, props, proscenium and quick changes (so many quick changes) lend energy to the action. This is storytelling with no interest in verisimilitude, whose illusions are conjured in plain sight. Why would you imitate when you can amplify, exaggerate, distort or deceive the eye?

The continuous flow of visual activity taps into the restless, giddy energy of both a score and a story booby-trapped with riddles, puzzles, challenges. From impromptu games of One Song to the Tune of Another (Humpty Dumpty’s song to the tune of Beethoven’s Ode to Joy, Jabberwocky to the tune of It’s a Long Way to Tipperary) to a croquet match collided with a polyglot piano lesson and a dizzying descent down the rabbit-hole set against a stratospheric coloratura ascent, Barry matches Carroll for absurd invention.

His score transforms simple ideas (through repetition or simply volume) into significant statements, gaining momentum through sheer conviction and great washes brass and volleys of percussion. And just when you think he’s left himself nowhere to go, a sudden withdrawal of pyrotechnic heat in the final scene shocks us back into cool reality. Conductor Thomas Adès deploys his forces with absolute precision, the still point and anchor in the hour’s bewildering convulsions.

A juicy line-up of singers is spread across two different casts, alternating performances during the opera’s brief run. In the first cast Claudia Boyle’s Alice dispatches Barry’s endless top Cs with matter-of-fact ease, going head to head with Clare Presland’s Red Queen and Queen of Hearts for imperious authority. Elsewhere Hilary Summers switches from pompous Dormouse to ferocious Cook in moments, while Sam Furness brings nervous energy and bags of top notes to everything from a frog to a cake and an oversized baby. Joshua Bloom gives the audience a brief moment of respite in Humpty Dumpty’s ballad, but Mark Stone’s Cheshire Cat feels underused.

At the heart of Carroll’s Alice stories is the collision between the rational everyday and the fantastical absurd. In Barry’s opera we lose all sense of that anchoring rationality, floating free in a sea of extraordinary sounds and images. Over the course of a whole evening this might pall, but for an hour’s giddy, family-friendly entertainment? It’s bliss.