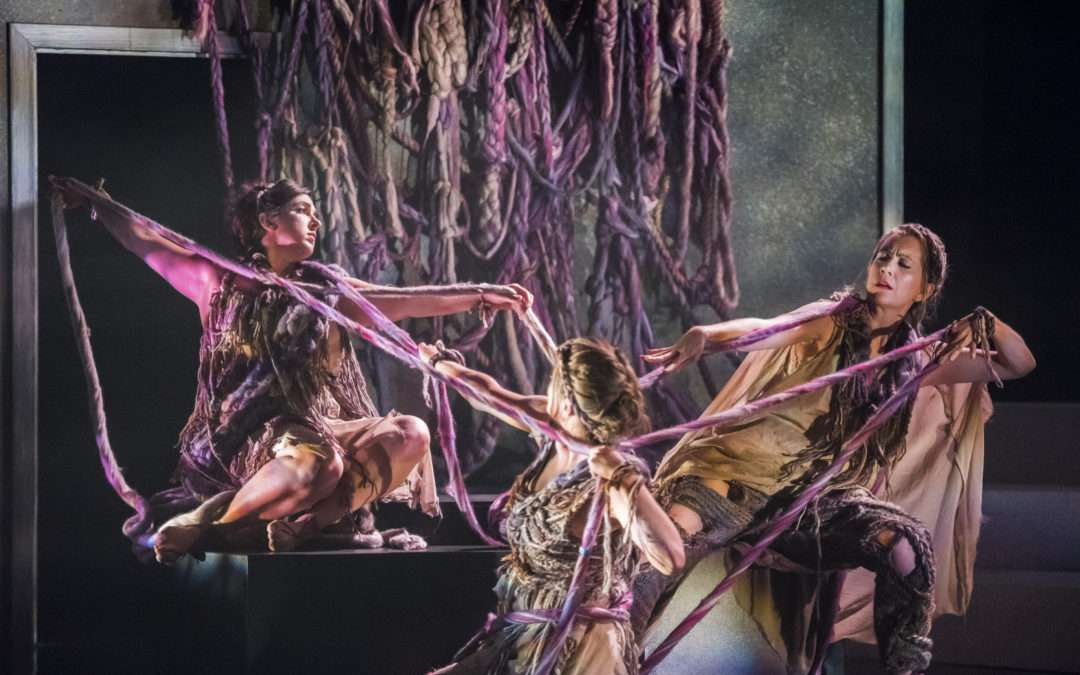 “Is there no ‘beyond?’/ Are we already there?” Ariadne asks towards the end of Ariadne auf Naxos. At the opening night, conductor Anthony Negus and the Longborough Orchestra were conveying exactly that sense of having suddenly stumbled across new and unexpected joys. They were doing so consistently, indeed magically. It is not that Negus was intent on harrying the music forwards, more that he found wonderful ways to turn each new page of the score and to reveal and relish what was on it.

Two of those moments which particularly stay in the mind are the section for solo strings which sets the actual “opera” in motion, and later, from the last sequence of the work – in effect a series of new vistas opening up as Ariadne experiences her magical transformation from the darkest depression to a new light – the section where the trio of Naiad, Dryad and Echo ask to hear the sound of Bacchus’s voice once again. In his programme note, Negus writes of all the “magic that Strauss has up his sleeve”, and this was precisely the sense the conductor was bringing out in this music.

Director Alan Privett had a rather different focus, as he described in his programme note. He is drawn by what he calls Strauss’s and Hofmannsthal’s capacity to “question all the assumptions we’d normally make about opera, about mythology, about comedy.” That led to at its best to light-footedness in moving the narrative forwards. But it also led to occasions where the pressure was really on for this cast of mostly young singers, often relatively new to the roles, and particularly at this early stage of the run of performances.

Perhaps the most extreme example was in the things Zerbinetta was required to accomplish while delivering the show-stopping aria ‘Großmächtige Prinzessin’. This Zerbinetta, Robyn Allegra Parton (below) had clearly mastered the vocal virtuosity required, but the amount of bizarre stage business she was tasked with detracted from her capacity to make her stage presence shine. While having to fix leather harnesses to her three suitors and then marshal them around the set, tethered like a pack of dogs, it was no surprise that she – and indeed the men –  looked less than completely at ease. 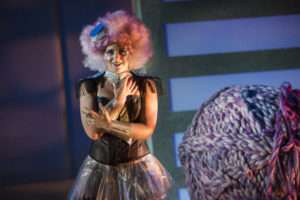 Privett also expresses a wish to explore the theme of gender fluidity, and did so by turning much of the scene where the Composer’s view of the world is radically changed by her encounter with Zerbinetta into a slow smoochy dance for the two women. Whereas the mind-blowing change in the Composer and the reasons for it are all there in Hofmannsthal’s words, this undermined her transformation because the focus had shifted away from those words to a mainly physical attraction. So when the Composer asserts that she has suddenly acquired a new-found courage, it feels too sudden, preposterous. And duly got a laugh…

Jonathan Stoughton’s fine tenor voice and his previous experience in the role of Bacchus were much in evidence and he gave a strong account of this unforgiving role. Helena Dix as Prima Donna/Ariadne grew into the role as the show progressed. Among the minor parts I enjoyed the vivid character-acting and the beautifully enunciated German of Harry Nicoll in the role of the dance master. I was impressed and affected by the deep mezzo timbre, musicality and stage presence of Flora McIntosh as Dryad. Julien van Mellaerts as Harlekin gave an irresistible account of the song ‘Lieben, Hassen, Hoffen, Zagen’ and was a lively stage presence.

I wondered about the presence onstage throughout the opera itself of a giant ball of thread, an allusion to the labyrinth myth. It not part of this story of Ariadne, but is presumably justified by a single reference in the text to Ariadne sitting at a “Webstuhl”, a weaving-chair. And the fingering of thread did seem to fit well with the theme of being stuck in a depressive frame of mind – for the time that she was, and before the transformation, by which point it had outlived its permanence as an unnecessary shadow of a past memory, whereas the ability to forget is central to this opera.

But what stays in the mind above all is the momentous sweep of the final scenes, where the work of designer Faye Bradley and lights by Ben Ormerod brought all those magical transformations to life.

Anthony Negus, the star of this show, took a little while to get onstage and to be ready for his bow. But when he did, he received the loudest applause, and thoroughly deserved it.