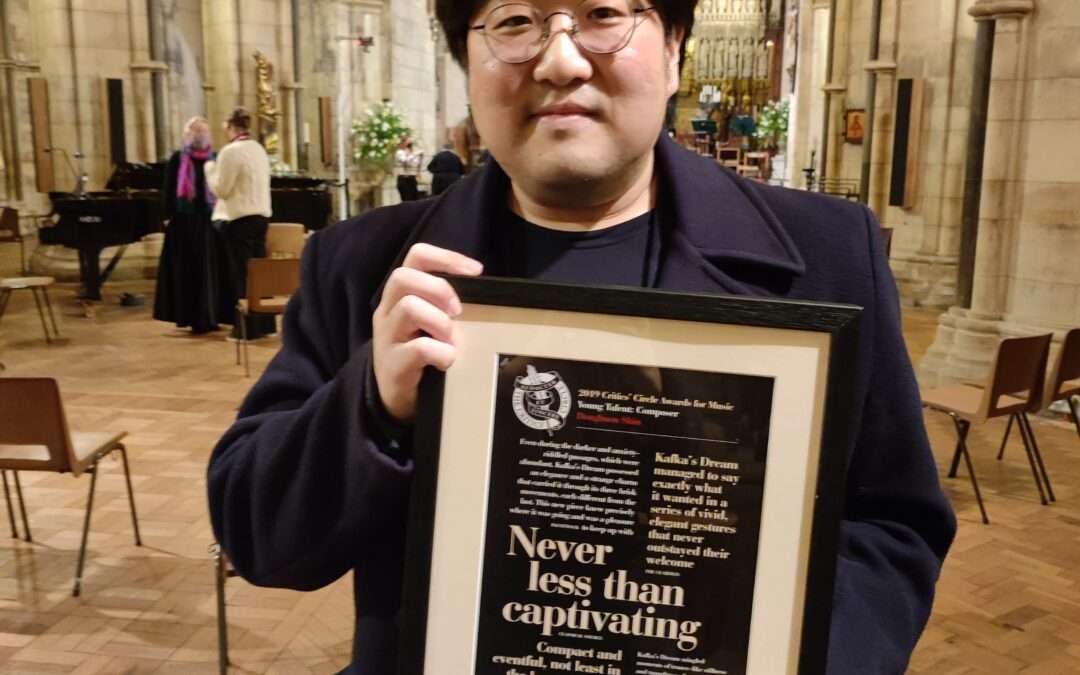 The presentation of the Music Section’s Awards for 2020 (based on activity carried out during the previous year) has been much disrupted by the Coronavirus pandemic. The Section prefers to present the Awards wherever possible at concerts featuring the artists involved, but as concert-giving activity resumed only fitfully, making the presentations has taken time to arrange, especially for those artists with international profiles.

As a consequence, it was not until November 4th (2021) before we were able to arrange the handing-over to our composer-laureate, the South Korean-born but London-resident Donghoon Shin, at the premiere in Southwark Cathedral of his quintet for clarinet, piano, 2 violins and cello, My Shadow, based loosely on the poem by RL Stevenson. The premiere was given by members of the City of London Sinfonia for which the composer had flown back (that morning!) from South Korea where he had been attending performances of his music conducted by Osmo Vänskä.

The citation for this award, written by Ivan Hewitt, reads:

Donghoon Shin, a [then] 37-year-old Korean-born composer now based in London, impressed us with the precision of his aural imagination and his fascinating, unpredictable poetic sensibility. György Ligeti and compatriot Unsuk Chin are among his heroes, and the fantastical sound-world of his music does recall theirs at times, but he is no epigone. His teenage enthusiasm for jazz is still alive in him, and the Schoenbergian richness of his Kafka’s Dream points to another influence one might not suspect at first. 2019 brought two impressive UK premieres, including Anecdote, a concerto for sheng (a Chinese mouth-organ) and ensemble premiered by Wu Wei and the Birmingham Contemporary Music Group, which was by turns nocturnally atmospheric, hectically urban and nostalgic. There’s an urgency and generosity about the music which suggests he will just grow and grow.