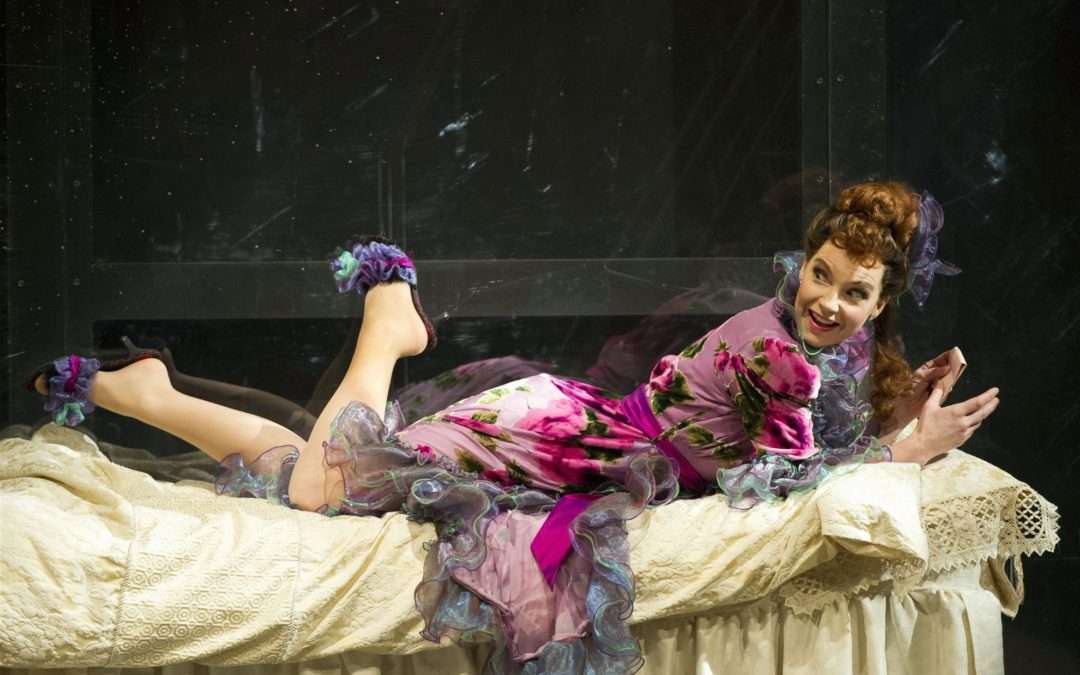 With Rossini’s Barber of Seville, the first of their trilogy of Figaro operas, Welsh National Opera set out their stall. Sue Blane’s costumes were bright, Ralph Koltai’s set was contrastingly downbeat, the activity of Sam Brown’s production was frenetic and the atmosphere that of panto. James Southall conducted. The overture was accompanied by irrelevant activity (in this case darkly-clad figures opening and closing outsized scissors in time to the music), and excessive stage business spoiled much of what followed. Though borderline justifiable in the jollities of Rossini, much of this would remain in place through the other two operas.

The opener, in which Nico Darmanin’s Almaviva (kitted out as a one-man band) is trying to organise a concert party brought in to serenade Rosina, went off very well. The chorus were clad in boaters, blazers, waistcoats and moustaches, with a running theme of stripes – barbers, do you see. Nicholas Lester’s entrance as Figaro brought on one of the evening’s two stars, this one in bright red trousers and matching self-assurance. The synchronised visual jokes were quite nice here, but as time passed the way the so-called gags kept coming during important arias began to annoy me more and more.

I wonder at what point the decision was taken for Claire Booth (Rosina) to parade herself like a pole-dancer in a basque and drooping negligée? This didn’t help her, the characterisation or the plot. Booth played the hand she’d been dealt pretty well, though her voice was underpowered. Indeed, much of the show lacked sonic punch; perhaps the acoustic was unkind. Andrew Shore played Dr Bartolo extremely well. The characterisation was effective, and both made as good a job as anyone could of the English text, apparently designed as the vocal equivalent of a steeplechase. An underwear gag was beneath contempt; the Two Ronnies on an off night.

Don Basilio (Richard Wiegold) seemed to have been a parody of Endgame’s Hamm: blind, dark glasses and a toy dog. There were some blind-man gags that seemed to ante-date political correctness. As for the toy dog, perhaps it was included to prove the theory advanced in Shakespeare in Love – comedy and a bit with a dog. The Bristol audience loved it and greeted it, and the show as a whole, with warm approval. My response was more muted.