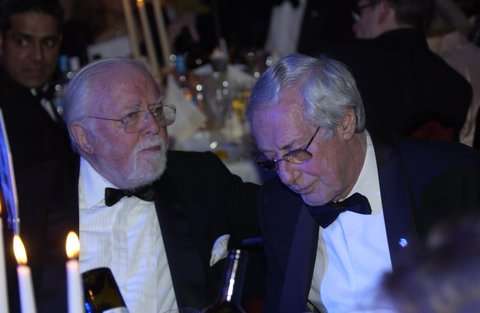 Barry Norman and Richard Attenborough at the Circle's Film Awards.

This is not an obituary. The details of Barry Norman’s long and successful career as journalist and film critic have been covered elsewhere in great detail – he was truly a national treasure. But he was also a friend of the Circle who we made an Honorary Member in 2001 as a tribute to his career – it was the year he ceased to present his film programme on television, which had made him known to all who loved the cinema. Film — ran from 1972 to 1998 on the BBC and then he moved for three years to BSkyB.

On Facebook where many members of the Circle spoke warmly about him, one former member, Darren Vaughan, who now lives in Australia, who chaired our Film Awards for several years and was also a member of the Guild of Regional Film Writers told about his treatment by Barry as a young journalist. It seemed to sum up what others had said. So here it is.

Something strange happened to me last Sunday night. As I drifted off to sleep my mind was pinging all over the place. As it joined the random dots of one thought thread to another I got round to thinking about Barry Norman. I hadn’t though about Barry in a long time. The next morning as I sat in front of my computer I learned about his passing. The universe was at work in strange ways.

For many ex-pats like myself, he was a significant part of life growing up in the UK. Personally, his significance was far greater to me than for many. You see, Barry was the reason I got in to film journalism. As a teenager with a growing interest in film I wanted to know how I could go about putting my passion into practice. I wrote Barry a letter and sent it to him at Television Centre. A reply came quickly. The advice was simple. The tone was warm and encouraging. His words of wisdom spurred me to action and within a few months I was reviewing movies on my local BBC radio station. It was a start of a career that would last over sixteen years.

We occcasionally crossed paths over the years., I first met him in 1988 when I was a 17 year old venturing to Cannes for the first time. I managed to track him down and leave a message at his hotel asking if he would be open to an interview for my radio show. He called that afternoon and next day we met at the British Film Pavilion.

The next time was in 1995 when he accepted an invitation to collect a Special Achievement Award from the Guild of Regional Film Writers. It was a particularly memorable occasion. That day I had been voted in as chair of the Guild and awarded Regional Broadcaster of the Year. It was a huge day both professionally and personally made all the more special by having Barry in attendance, the man responsible for putting the wheels in motion a decade earlier. Nothing gave me greater pleasure than to be able to thank him personally for helping me get to that point.

The last time I saw him was shortly before I left for Australia in 2002. I co-hosted the Circle’s 22nd Film Awards at the Dorchester and Barry was there to present an award to Helen Mirren. I recall his speech as a highlight – intelligent, witty, charming. All the characteristics that very much embodied the man himself.

I can’t claim to call him a friend but I will claim him as a mentor and idol. And what is more an incredibly talented writer and broadcaster to boot.

Brian Burton, former head of publicity at Rank and a long time participant in the running of our Awards, said that during his career he had welcomed Barry and the Film team to his screenings on a weekly basis.

Barry would often bring his daughters to my screenings and we became good friends,” he said. “It was always a pleasure to see him. He wrote his film reviews with honesty and from the heart. He was a gentleman, a wordsmith and a critic par excellence. He often interviewed our stars and directors for the programme and I cannot recall a cross word ever spoken. Barry treated artists with respect and a well researched knowledge of their films and acting careers. He made a lasting impression on his peers and it was a pleasure to have known him.

So there you have it.  Tributes from someone he inspired, from someone he did business with – publicists do not always love critics. I do remember getting a DVD of Ealing movies, one of which had been directed by his father Leslie Norman and telling him about it – I had to phone him for something or other – and he was not only pleasedIi had seen it but enthused about his father’s films. It was a request for something; perhaps it was the year he gave us a supply of his pickles for the goodie bags. The point is he was happy to talk.