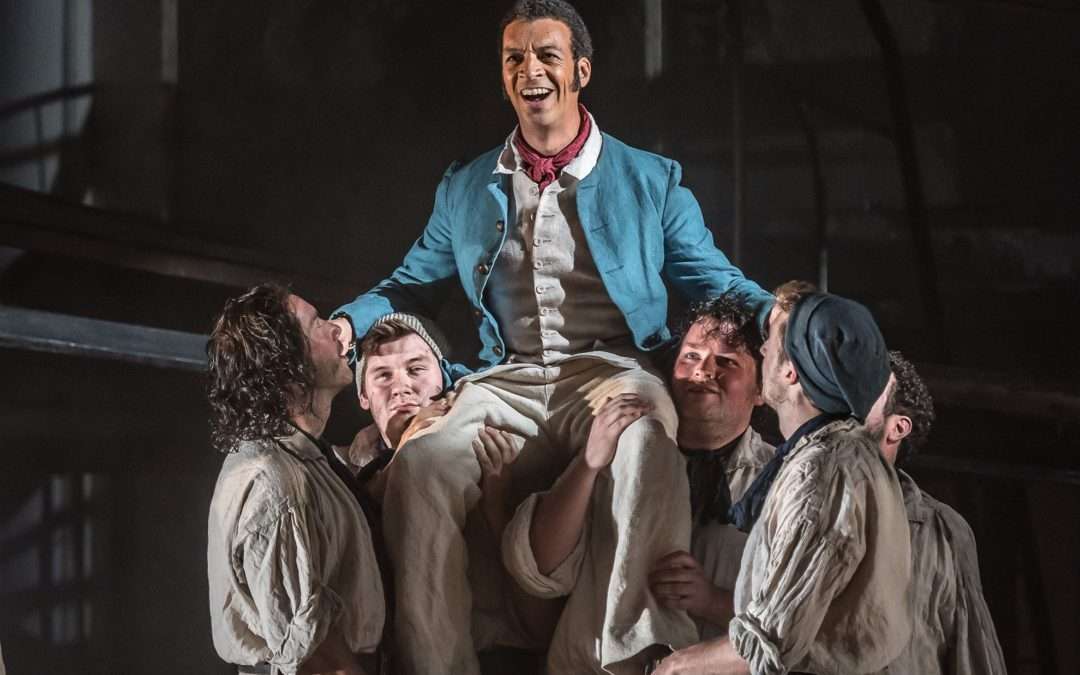 Britten’s operas are often about ordinary people asking themselves if they got some challenge in their lives right or wrong. The issue of judgment really was what propelled Britten’s instinct for drama, and it is absolutely central for his three perhaps greatest operas – Peter Grimes, The Turn of the Screw and Billy Budd; the frame within which Budd is set is Captain Vere’s self-questioning. As all memory of the original performances of these great works fades away completely, it is thrilling to see the pieces articulated as above all ensemble works that treat all their characters on an equal level.

Opera North’s new production of Billy Budd, written for the Festival of Britain season at Covent Garden in 1951 and based on a Melville short story that was unpublished until 33 years after his death in 1891, is staged with potent skill by Orpha Phelan. The period style is traditional, the story well told. But the mostly below-deck set by Leslie Travers is intimate and domestic, almost abstract, and does not labour the sense of the sea and of the mist that is so important when the company spots a French ship and takes up action stations. Travers’s costumes are carefully realised, the relationships very precisely geared by Phelan and entirely believable with no overacting. In fact it’s the best-cast performance of the opera I have seen, without a single less than immaculate performance, and extremely well conducted by Garry Walker, a not yet very well-known Scottish conductor of considerable talent.

The fact that there are no women in Billy Budd renders it interesting on various fronts. There are the background motivations: Captain Edward Fairfax Vere and Master-at-Arms John Claggart are attracted to the beauty of the young pressed sailor Budd, and both the production and E.M. Forster and Eric Crozier’s text do not fail to evoke the matter more or less subtly. But it would be hard to imagine a less camp or nudge-nudge approach to the topic of sexual preferences that Phelan’s. Indeed – despite the Royal Navy’s 19th-century reputation for rum, sodomy and the lash – she concentrates exclusively on the consequences.

An ideal cast owes much to the fact that Opera North – managed for many years by Christine Jane Chibnall in association with General Director Richard Mantle – has a sort of informal ensemble it frequently hires, and collaboration and mutual familiarity show. Roderick Williams, one of the brightest of British stars, is totally convincing and sympathetic as Budd, naive and enthusiastic enough, but very much one of the lads alongside the rest of the company (which does not always happen). Alan Oke’s Vere is right up there beside Philip Langridge’s for ENO. He is just as good during the severe crises as when relaxing with fellow officers over a glass of wine (toast to “the French – down with them!” done perfectly, amused not smug), but equally compelling when opening and closing the entire work without grandeur, suffering the anxiety of eternal judgment.

Alastair Miles, an always modest wonderful bass, is subtle, firm and self-commanding as Claggart – all the more frightening for not being a monster. Also to enjoy are Oliver Johnston’s novice – a fine new voice for me; Adrian Clarke superb as Mr Flint, a singer whose opera work has for decades given great pleasure; Peter Savidge excellent as Mr Redburn (he also writes a learned and interesting contribution to the programme); Stephen Richardson is at his most rewarding as the old sailor Dansker who has seen it all; and Callum Thorpe, newer on the scene, very effective as Lieutenant Ratcliffe.

The officers are so important in their attitude, humour and seriousness. But the chorus work, the ordinary sailors, is tip-top quality. Opera North is a real national treasure. Britten wrote many masterpieces drawing on his self-understanding and the anxieties of his life. This opera with its homage to Verdi’s Otello is truly Shakespearean. See it.