From Bow to Biennale: Artists of the East London Group, by David Buckman (Francis Boutle) 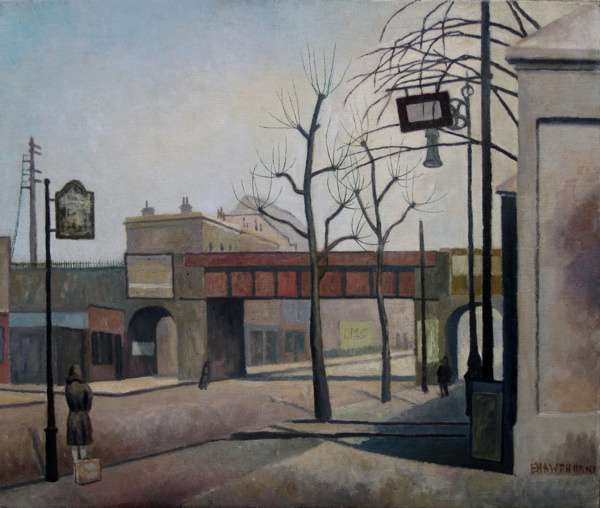 For little more than a decade the East London Group of painters had international renown with coverage in the national and international press as well as specialist art periodicals. Their work was bought by discerning collectors and their sales figures belied that the group’s zenith was in a worldwide economic depression. Two members were even invited to show in the Venice Biennale of 1936 alongside Barbara Hepworth, Duncan Grant and, a champion of the group, Walter Sickert.

Now the East London Group is almost forgotten, but a new book by David Buckman sets out a remarkable story of a club that started as a Bethnal Green evening class, grew to professional acceptance, and was over by the start of the Second World War. Buckman said:

There were parallels with the Pitman Painters (the Ashington miners who took to art and became the subject of a successful 2007 play by Lee Hall) in that they began as untrained amateurs and were influenced by an enlightened teacher, but the difference is that the East London Group were seriously good artists.

Painters such as the brothers Harold and Walter Steggles (professionally a solicitors’ clerk and a shipping clerk respectively), Albert Turpin (window cleaner), Reginald Tomlinson (school inspector), Elwin Hawthorne (painter and decorator) and Archibald Hattemore (navvy) became famous for a while, but had risen as a part of the group whose origins had been in the Bethnal Green Men’s Institute Art Club whose librarian, A K Sabin, rather pompously wrote that the club was “the first serious attempt to interest the worker of the district in the executive side of art”.

The institute’s first annual exhibition was in 1924 at the Bethnal Green Museum, all its exhibitors being self-taught. “My Bethnal Green gang produced good and various paintings” said their teacher, William Finch. “It was a varied bunch and tough  – a formerly well-known professional boxer, a cooper, a London street busker, a market trader, an injured window cleaner, and others all with interesting stories and backgrounds”. But by the 1927 show the key elements of the bunch had switched their allegiance to the Bow and Bromley Evening Institute, and to a recent Slade graduate teaching there, the charismatic John Cooper, who saw enough potential in them to launch them onto the West End gallery circuit. “Life in those days could be very new and exciting” recalled one of the group, Cecil Osborne, “and all art very wonderful, opening new vistas to be explored”.

Born the son of a Yorkshire greengrocery trader in 1894, Cooper has served in the Royal Flying Corps in the First World War after which he went to the Slade with his ex-serviceman’s grant, where was taught by Henry Tonks. He embarked on a professional career as a painter of portraits and landscapes, underpinning his income by teaching evening classes. Soon he began to see a vocation in teaching, and created a network of powerful supporters among former fellow students, subjects and collectors, such as Henry Moore, J B Priestley, Thomas Beecham, Arnold Bennett, Aldous Huxley, Ramsay Macdonald and Osbert Sitwell.

His East London Club’s first exhibition was at the Whitechapel Art Gallery in 1928 when “about 30 members drawn from Hackney, Whitechapel, East Ham, Poplar, Mile End and so on” showed, according to the Evening News. In May 1929 Cooper told the magazine The Millgate: “At one time the students numbered only nine; now there are fifty-five”. Many of them joined to be able to no more than paint images for greetings cards, and Cooper steered them into more challenging areas. “It was his inspiration to get the members to stop painting film stars and to paint what was all about them, say, a dingy bedroom, and look at it in a new way,” said another evening class teacher, Nancy Coldstream. Her husband William, the painter and future of principal of the Slade, was also a Cooper assistant.

But as early as 1924, he told the Evening News, Cooper had been surprised by the painter-like qualities of some of the students. “They boldly tackled scenes from their everyday life, seeing beauty in most unlikely subjects and reproducing it with surprising success” he said. He wanted the exhibitions primarily to give an expression of East London life.

Teaching help came from his Slade friends, and Rodrigo Moynihan was one of his assistants; Sickert gave the group informal lectures, telling the group they did not need to go on expensive excursions to find landscapes to paint. “There is no need to go to Bognor” he said. “You can go into the Tube”.

An important exhibition at the Whitechapel Gallery in 1928 was the start of the group’s success, with coverage in the national press and two pictures being bought for the Tate’s collections. The influential Studio magazine described the show as “little short of sensational”.

It was followed by an exhibition at the Tate in 1929 of 24 pictures from the group, showing “what British artisans can do in their spare time”, as the gallery’s press release put it. It was the signal for the metamorphosis of the amateur East London Art Club into a professionally recognised East London Group in which Mayfair art dealers began to take an active interest.

In 1935 there was a touring exhibition of Canada and the USA, organised through the Courtauld Institute whose founder, Samuel Courtauld, was an enthusiastic patron of the group, and augmented by contributions of professional London Group artists such as Paul and John Nash, Charles Ginner and CRW Nevinson. The high point, though, was the inclusion of paintings by the east London group’s Elwin Hawthorn and Walter Steggles in the 1936 Venice Biennale, the last year before the British contribution was organised by the British Council.

The end of the group began when a five year contract Cooper had negotiated with the Lefevre Galleries ended in 1937, followed by the decision of the Bromley & Bow Institute to expel the group – because other students thought it unfair that they were allowed to use the institute’s facilities to exhibit and sell their work – and Cooper left too. After some war work as an air ministry draughtsman, the intensity of which compounded by a near miss from a direct hit in the Blitz, prompted a nervous breakdown. Cooper returned to his native Yorkshire where he became ill with sclerosis of the spine and died in 1943, aged 48.

With his death any prospect of a post-war revival of the East London Group died too, and though several of the artists continued to work and show, as well as pursuing their day jobs, they never exhibited as the East London Group again. “My efforts have been directed to stimulating the students to express something which they feel about life,” Cooper had told The Millgate. “This was some of the reason for Rembrandt’s greatness”.