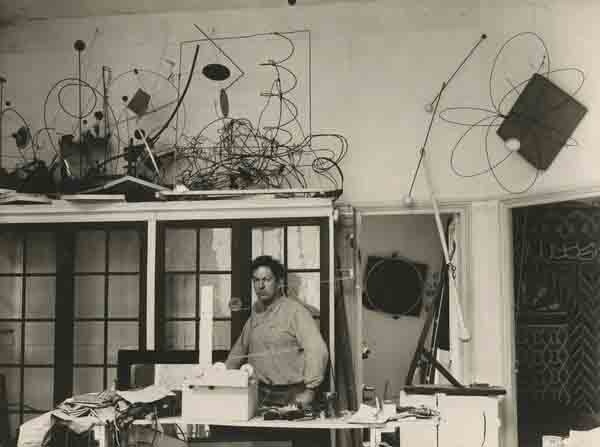 Calder in his studio at 14 rue de la Colonie, Paris

Alexander Calder’s art, his exploration of movement and time to the previously a static medium of sculpture, was, and still is, is ground breaking. So it is a surprise to find that until now there is no full biography of him. There have been previous attempts; Calder asked the reporter for the Springfield Union, William Rogers, to write one, but found the result too anecdotal. Other writers have proposed writing biographies to Sandy Rower, the sculptor’s grandson and president of the Calder Foundation as an way to promoting this or that forthcoming exhibition but Rower worried that the balance of Calder’s personality would not come across. And there is, of course, the Calder autobiography, that Rower describes as somewhat meandering.

Rower says that Calder’s public persona has been somewhat ‘teddybearised’ by derivatives of Calder’s great sculptural leap forwards, the mobile, being hung over children’s cots. The New York based Calder Foundation’s mission is to re-establish the sculptor as central to modernism.

Finally, the renowned art critic, Jed Perl, presented himself to Rower as a suitable author and the result is a thoroughly researched two volume work that has trawled previously unavailable documents and archival photographs, interviewed a vast number of people and searched out little-known works. Although Rower, himself, has not been entirely hands off as he has an intimate, if not to say encyclopaedic knowledge of the works, including the minutiae of their technicalities, as he has registered over 22,000 pieces of his grandfather’s work in the archives of the Calder Foundation.

Volume one covers the years from Calder’s birth, in 1898, his upbringing in Philadelphia, California, and New York, his training as an engineer at the Stevens Institute of Technology before returning, since  he had been an artist from birth, to art, on through to his time in Paris among the avant-garde, up to the year 1940.

Perl felt it important to establish Calder’s background. Both Calder’s parents were artists; his father a well-known sculptor and his mother a painter and pioneering feminist, both of them knew the artists of the American Ashcan School. But it is the influence of the American Arts and Crafts movement, that was both an aesthetic and a social movement with links back to the writings of Ruskin and Morris, that Perl feels was so formative for the young Calder. It is against that background that the young Calder began to work with his hands, first working with metal when he was 10 years old. It is also this background, Perl feels, that led Calder to combine the functional, the non-functional and the aesthetic.

Describing Calder as bright, gifted but lackadaisical youth, Perl dispels the myth that it was Calder’s parents that pushed him into studying engineering, saying he somewhat fell into it. He had followed a friend’s idea to study mechanical engineering, but it was not long before he turned back to the family profession of art. Only having failed to make a success of various engineering jobs did he turn to art. Throughout this checkered early career Calder’s parents, who were not rich, would support him and continued to send him a monthly cheque when he went to Paris in the mid-1920s.

Once in Europe, he was not an American in Paris so much as part of the Parisian Avant-garde, a milieu of citizens of the world among whom he would forge long term friendships with Georges Braque, Marcel Duchamp, Martha Graham, Joan Miró, Piet Mondrian, and Virgil Thomson.

The biography follows him from New York’s Greenwich Village in the Roaring Twenties, to the Paris’ Left Bank during the Depression, and back to the United States, his emergence as a leader in the international abstract avant-garde and his marriage in 1931 to Louisa James – a great-niece of Henry James. All told in perceptive, beautifully written prose.

However, one must wait to follow Calder’s emergence as the first truly international artist, travelling the world to fulfil commissions, as only in the late 1940s through the 70s did his reputation grow beyond the avant-garde despite the 1943 Calder retrospective at New York’s Museum of Modern Art that was so successful it was extended. Volume two is not to appear for another two years.