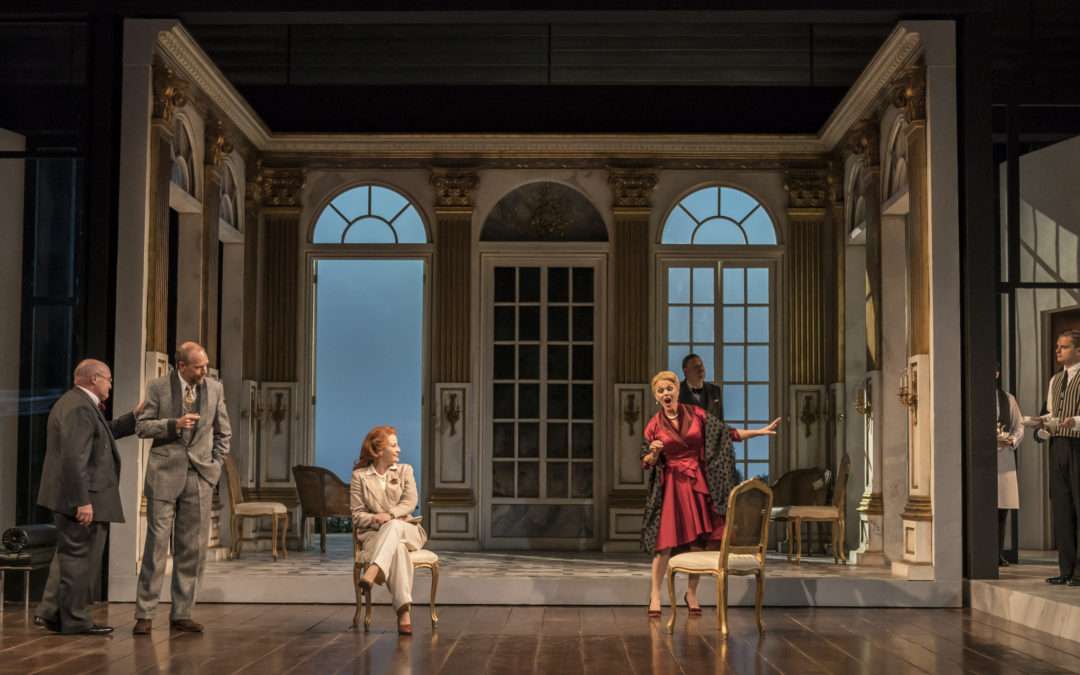 It’s a legal requirement these days to preface any discussion of Richard Strauss’s final opera with snarky comments on its wartime composition in Munich. Sure, it seems a bit odd to us now to have premiered this whimsical conversation-piece just as Stalingrad was getting into its stride. But it’s rather useless to argue about whether Strauss’s motivation in writing it stemmed from some profound denial, or constitutes a brave defence of civilised values, or something else. I feel it might also be possible to feel sorry for a humane old man who had given immense pleasure through music, sitting in Munich waiting for the nightly air-raid, watching the world collapse around him and writing about another world on the brink of extinction. But that sort of attitude is very unfashionable now that we are all so bloody marvellous.

As to the product – if only Stefan Zweig (who suggested the idea) had written the libretto! Then at least it might have been a fair fight between words and music, a subject which in any event hardly deserves two and a half hours of idle wittering. Unfortunately, Strauss decided to write it himself, with the conductor Clemens Krauss; one ghastly precedent set by this opera – enthusiastically followed – is the idea that a proper writer is not required for an opera libretto; and of all subjects, this here would seem to want one.

As the piece stands, and particularly when sung in German to an Anglophone audience, there is evidently no contest, a point elaborately made by the final 15 minutes where Strauss unleashes all his favourite old tropes – which always sound to me rather like Victorian hymn tunes drowned in determinedly gorgeous harmonies, orchestration, don’t-scare-the-horses chromaticism and modulations cunningly devised to induce frissons – in an unanswerable torrent. There is something reprehensibly efficient about Strauss’s way of creating effect; amazingly, it still works when you know it’s coming. And so here: defences crumble before this onslaught of beauty with a soupcon of decadence, and we succumb to the yearning and the wistfulness as this final opera and testament shudders to a dreamy close.

Tim Albery’s elegant and effective production at Garsington frees itself from the trammels of time and place, which is not actually very helpful. This little bourgeois salon could be anywhere, any time – though clothes suggest late ’40s and Paris is mentioned quite a lot. This would appear to subscribe to the composition-as-escapism school, throwing us back on the thin merits of the opera’s own philosophising, removing its anchors to any immediate reality. Of course in 1775 (when the opera is “set” by Strauss) nobody knew the French Revolution was round the corner. But we know, and it hangs over of the squabbling aesthetes like the guillotine that might await Madeleine. Did Strauss have the same feeling about 1941-2? – the absolute apogee, of course, of the Third Reich’s apparently unstoppable progress.

So what we have, really, is an out-of-date argument conducted in middle-class clichés by not terrifically interesting people. The only thing left is to enjoy the journey. And though conductor Douglas Boyd doesn’t really get Strauss’s mixture of delicacy, bumptious humour, charm and strength – and it’s a hard combination to pull off – the eddies and swelling sensuality are easy to wallow in. It’s a decent cast too, though the indispensable glamour is left entirely in the hands of Miah Persson, who certainly drifts about like one of your wiltier golden-age film heroines and sings with intermittent beauty – the voice is strong and pure, but not truly gorgeous in the ideal Strauss way. Everything else is a bit dowdy, though Sam Furness and Gavan Ring are both occasionally ardent and always convincing as the composer and poet vying for her affections (in theory – there’s not much passion here), Andrew Shore owns the stage completely as the theatre director, and Hanna Hipp has a slightly odd role as someone impersonating Katherine Hepburn. The abiding memory, as often the case with Strauss, is an orgasmic soup of sound. But this particular opera really needs a bit more meat in the soup to keep its audience interested.