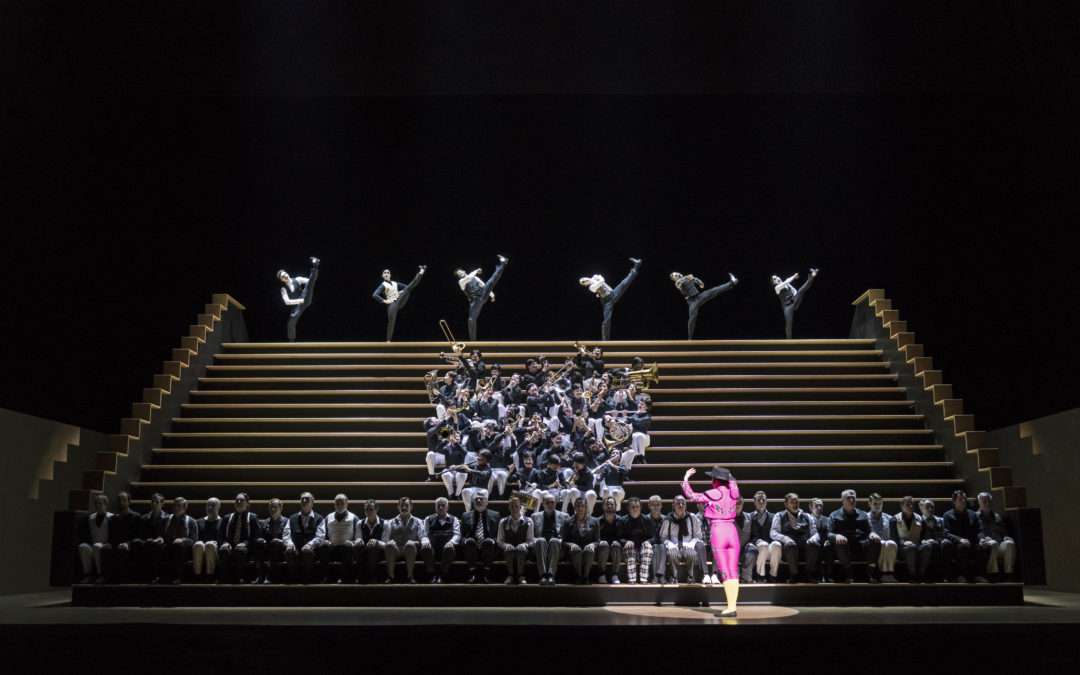 If the Royal Opera had been looking for the polar opposite to its last production of Carmen, it hit the jackpot with Barrie Kosky’s staging.

Whereas Francesca Zambello created a conventional Spanish fantasy set around a Seville plaza, teeming with urchins, chickens and a real, plopping donkey, Kosky’s aesthetic is a mixture of vaudeville and stark simplicity. It’s a strange but compelling combination for a masterpiece in danger of being taken for granted. Kosky rejects the Spanish cliché of Carmen, seeing instead a work that opens with the lightness of French opéra comique and plunges into verismo. There are no fans, no castanets (except in the orchestra) and no cigarettes. Kosky leaves it to the music to paint the pictures, with percussive footwork by chorus and dancers hinting at horse riding, military drills and flamenco. In fact he has added music found in Bizet’s original version (from Michael Rot’s new edition), including an alternative setting of the Habanera.

Jakob Hrůša, making his Royal Opera conducting debut, sets the tone in the prelude, a brisk, tangy account that reveals colours and shapes often buried in orchestral pomp. As if echoing the musical reveal, the curtain rises on a giant staircase the width of the stage and a toreador in sizzling pink steps into the spotlight.

Kosky says he spent his budget on these steps, designed by Katrin Lea Tag, so they need to work hard for the money. They do. Lighting designer Joachim Klein creates fantastic architectural tableaux with spotlights and shadows and choreographer Otto Pichler shifts the chorus around the staircase in flurries like blown leaves. Escamillo gets to make a Busby Berkeley-style entrance for his adoring fans, and happily no one looks to be in danger of losing their footing.

Kosky’s Carmen, as created by Anna Goryachova, is a tease, but in a mocking, aloof sort of way. She makes her entrance at the top of the staircase in a gorilla suit, stripping it off to show boyish white shirt, tie and trousers. No other character in this production has as many costume changes – and no other character seems to exist except in relation to Carmen. Here Kosky’s big idea of having a pre-recorded narrative pays dividends – assembled from phrases in Merimée’s novel and the libretto, the disembodied voice of Carmen fills in some of the back story.

The men are ciphers – weak-willed Don José is almost too beautifully sung by Francesco Meli; Escamillo needs more brute strength and swagger than Kostas Smoriginas can muster on this first night. And as Micaëla, (often a thankless role for sopranos) Kristina Mkhitaryan is truly a little country mouse in both voice and on-stage presence.

There are no opéra comique-style dance numbers, but the small, snappy ensemble have two memorable cabaret routines using the full height of the staircase. There’s a whiff of 1930s Berlin, and costumes plucked from tango clubs or seedy bars in Marseilles circa 1925 – Kosky’s favourite vaudeville references crop up in the painted faces and jerky thrusting of the dancers and chorus. The Royal Opera children’s chorus is uncommonly good both vocally and as a theatrical team, and the adult chorus is impressively loud and clear when positioned on the staircase 20 feet above the orchestra.

Kosky reserves one more surprise for the end, when Don José has delivered the vicious stab to Carmen’s unyielding heart. She lies in a pool of light, a crumpled heap of black material, as he staggers away and the curtain prepares to descend. Suddenly she springs up, throwing her arms open triumphantly as if to say, “I won!”

Kosky’s vision won’t be to everyone’s taste – particularly those who want Seville and flamenco and Spanish heat. But it’s a fresh and contemporary take that may cause you to fall in love with the music all over again.