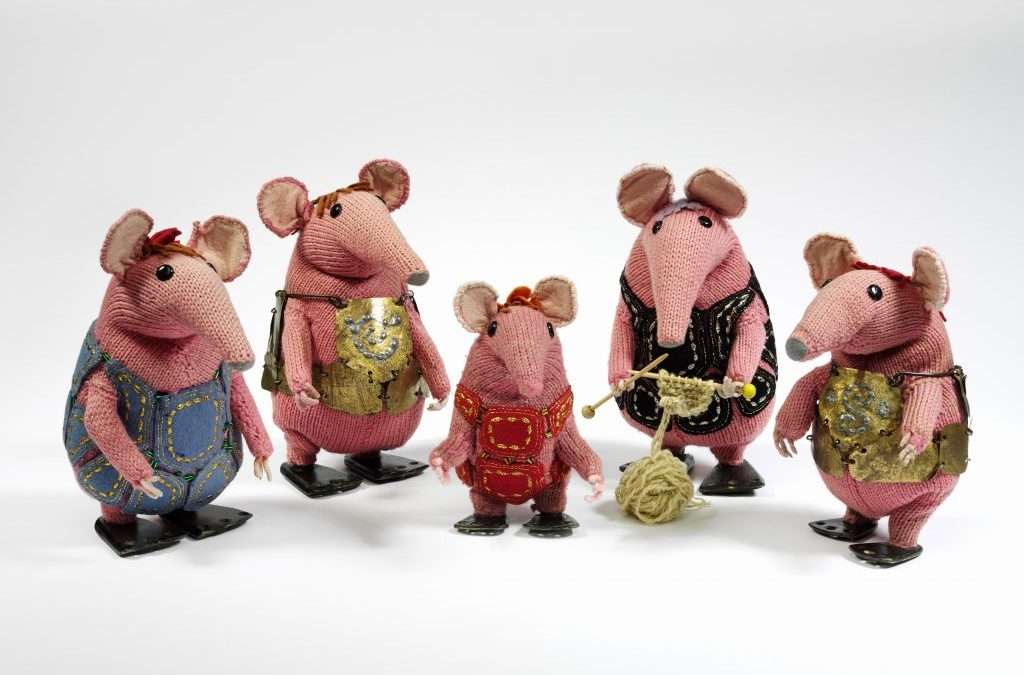 Just launched in a corner of that cornucopia of nostalgia, the V&A Museum of Childhood, is a free exhibition that will probably give more pleasure to more people than many costly West End blockbusters. Clangers, Bagpuss & Co is a first major retrospective exploring the world of Smallfilms, the much-loved production company created by Oliver Postgate and Peter Firmin, whose quirky and inventive television programmes shaped the early memories of millions. Their shoestring productions were, as the display points out, “cosy and surreal masterpieces”.

In a 1999 poll, Bagpuss was voted the most popular children’s television programme of all time, despite only 14 episodes having been transmitted in the first half of 1974.  In an age where recycling has become the agenda, the saggy old cloth cat “reminds us to find inspiration in old, broken and lost things.”

Postgate and Firmin’s films became a cornerstone of twentieth-century British culture.  From Watch with Mother in the 1960s to today’s CBeebies, over decades they have achieved a global audience.  When Clangers returned to the small screen in 2015, they attracted a new generation of fans.  As well as telling the story of Bagpuss and The Clangers, the show goes behind the scenes of other of Smallfilms creations: Pogles Wood, Noggin the Nog and Ivor the Engine.

Postgate and Firmin met in 1958, collaborated for over 30 years and won many awards.  Previously their lives had been diverse. Oliver, son of the Socialist writer Raymond Postgate, had, as he outlines in his 2000 autobiography Seeing Things, cobbled together a career and was by the 1950s creating mechanical shop displays and working as a television company stage manager.  After training at the Central School of Art, Firmin was in advertising and magazines and seeking freelance work.  He didn’t own a television and thought that much of what he had seen on the box was “rubbish”.

As a partnership the two realised that the only way they could maintain their independence and unique vision was a lean operation, based it in a barn and converted pigsty in Kent.  Before the days of computer-generated imagery, their films painstakingly employed stop-motion animation.  By this, cut-outs or puppets are moved by hand in between shooting single frames of film, so that when the film is played back, the object seems to move.  Operating at 25 frames a second, five minutes of Ivor the Engine required 7,500 frames.

After Postgate had written the script, Firmin would make hundreds of cut-outs to accommodate the story, then Postgate would start the filming in the pigsty.  Postgate would often have to interrupt Firmin in his other work when “needing another head or something.”

Visitors to Bethnal Green can see Postgate’s animation table, made of scaffold poles and pieces of bicycle, alongside sets, storyboards and scripts.  The budget was minimal, so objects such as wool, paper, string and pieces of Meccano were used, “plus buckets of ingenuity.”  Postgate’s innovations included “a measuring tape stuck to the walls, and fly spray to keep insects away.”

Postgate’s distinctively voiced narrative, as well as telling captivating stories, “encouraged children to look at the world with curiosity”, exhibition curator Alice Sage explains. Smallfilms “weren’t afraid of dealing with complex ideas in a magical way.  The stories have stood the test of time.”

This is especially true of the Clangers, about a family of mouse-like creatures who live on a small planet, speak only in whistles and live on green soup and blue string pudding. Although dating from 1969-74, their lasting popularity prompted the new series, narrated by Michael Palin, last year with successful viewing pictures.

Visitors to the museum can learn what Major Clanger was really saying, try their hand at animating characters using current technology and learn to speak “Clanger”. They can also learn why Bagpuss was originally intended to have orange stripes instead of pink, and how the pompous woodpecker Professor Yaffle in that series was based on the philosopher Bertrand Russell, a friend of Postgate’s parents.

Those unfamiliar with Smallfilms’ output can at Bethnal Green see excerpts on a small screen. My only criticism is that, such is the surrounding exuberance of the Museum’s juvenile fans, it can be hard to hear the narration inside the tiny booth.  But then few museums or galleries can regularly prompt such enthusiasm from its visitors.