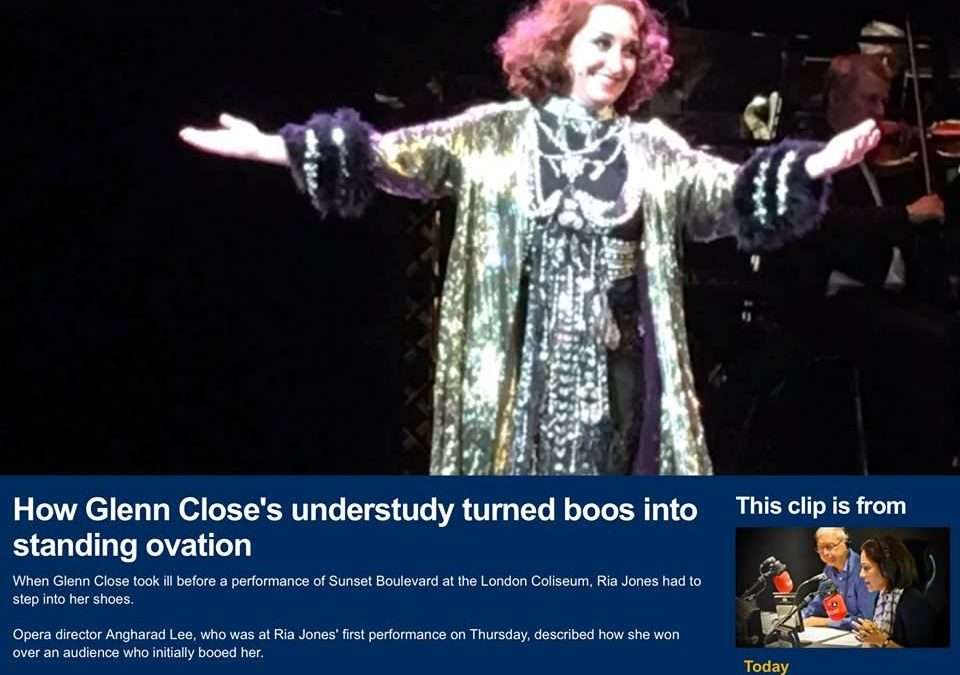 Ria Jones takes her bow. Picture by PR man and fan Kevin Wilson who was in the front row.

It does not occur very often that the star falls ill and the understudy has to take over, but that is what happened earlier this month at the Coliseum where Glenn Close, who was playing Norma Desmond in Sunset Boulevard, caught flu. Her understudy Ria Jones took over to at the end of the night to great acclaim and carried on for the rest of the week. But not all in the audience when told Close would not be appearing were happy. The management said it would not refund or change tickets which is within its rights to do, although doing it is not necessarily good for customer relations. The performance was delayed for some 20 minutes amid a great deal of argy bargy as some people, there solely to see Close, demanded their money back. Many had bought expensive seats – top price £150 – and coming from out of town had booked an overnight hotel. Those who stayed that night and at the subsequent perfformances saw Ms Jones deiver the goods. But she was not the reason for their being present. Jones is an experienced West End performer and had sung the role in 1991 when Abdrew Lloyd Webber workshopped the show. But she was then too young to take it on. She has been seen in Chess, was Grizabella in Cats, Fantine in Les Miserables and played Mrs Overall in the tour of Acorn Antiques. She has been in Royal Variety Shows, sung in concert with an enviable list of names, and appeared on Friday Night is Music Night. But she is not a star name. Close, on the other hand, is a star by any standards and had played Norma in the United States to great acclaim. Seeing her do it here was part of the sales pitch and the show was not marketed as Sunset Boulevard but as Glenn Close in……

The semi-staged production was slick, the supporting cast good, but like Jones none of them were bottoms on seats people, and the 51 strong orchestra, the English National Opera orchestra, was superb. The audience undeniably heard the score as well played as it is ever likely to be.

The fact is you are not entitled to a refund if a headline star does not appear. It is very much up to the management, but you can make a case for it. Start with the Front of House manager, if not happy ask who to write to further up the chain. You could try the producers or ask the Society of West End Theatres to help. Sometimes the terms of sale are printed on the back of your ticket and, if laying out a small fortune, it is always as well to look and ask what would happen if something went wrong. Theatres may change tickets to another night for a fee, some may give a credit note for a fee, some may even offer to try to resell them, although the sale depends on demand. It is also possible to get insurance to cover such crises for a relatively small fee and when booking an event that is person specific that might be a wise precaution. But one thing do not do – do not vent your anger on the person in front of you. They are only obeying orders, they will help you to take the next step.