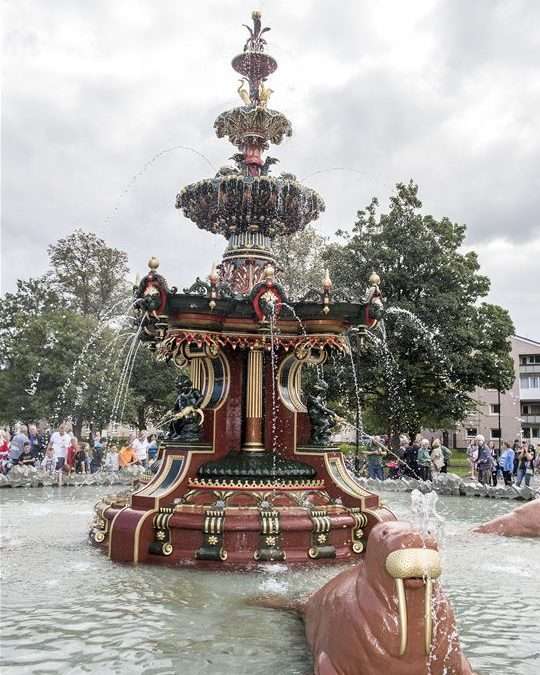 Thursday, 22nd October saw the equivalent of the Oscars awarded for Conservation of our artistic and cultural heritage, in a ceremony hosted by the Royal Academy’s Artistic Director, Tim Marlow, at the Institution of Mechanical Engineers. Organised by the Institute for Conservation, (Icon), the lead voice for the conservation of cultural heritage in the UK, the awards recognise the highest standards of conservation, research and collections care within the UK art and heritage sectors.

The winning projects showed a stunning display of skills and all had an impact and engagement on the public at large.

The winners were: The Staffordshire Hoard, Conservation Programme: Stage 1.  The Hoard is one of the greatest discoveries of Anglo-Saxon metalwork ever made, and its Conservation Programme gained its award for the impressive way it made the public say “wow” not just about their work but for creating a publicly-engaged, inclusive and collegiate project directly leading to the public’s growing enthusiasm for the Hoard.

Tate’s Rothko Conservation Project rightly picked an award for Research and Innovation in Conservation. Following an unprecedented incident in which Rothko’s Black and Maroon was vandalised with indelible graffiti ink Tate’s staff rallied international experts to meet the challenge. The judges were impressed by the strong application of fundamental research, and thoughtful treatment resulting in an unusually close collaboration between conservators, scientists, curators and members of Mark Rothko’s family. The award was collected by Patricia Smithen and Bronwyn Ormsby, wearing black and maroon!

The impressive volunteer program at the Coffin Works in Birmingham’s Jewellery Quarter took home the Icon Award for Conservation in the Community. Newman Brothers’ Coffin Works once produced some of the world’s finest coffin furniture, including the fittings for the funerals of Joseph Chamberlain, Winston Churchill and the Queen Mother. The volunteer team actively sort unemployed and disadvantaged people, teaching them new skills, giving them roles that matched their individual talents. They transformed a semi-derelict building into a visitor attraction keeping the building’s historical integrity, retaining and restoring as many original features as possible. Full of original stock and tools of the trade one now sees Newman Brothers’ original machinery working again, and experience how the firm operated on a day-to-day basis.

The project to restore The Grand Fountain in Paisley, Renfrewshire gained the Institution of Mechanical Engineers prize for the Conservation of an Industrial Heritage. This high Victorian cast-iron, A-listed fountain stands in the centre of Paisley’s oldest public gardens.  Hugely ornate with its dolphins, herons, cherubs and walruses it is now fully functional again and glosiously colourful to the delight of Paisley’s community restoring also the grand Victorian vision of civic joy.

The volunteer group who restored the Steam Pinnace 199 won the Institution of Mechanical Engineers Award for Volunteering in the Conservation of an Industrial Heritage Artefact.

Built for the Royal Navy at Cowes in 1911 and converted to an admiral’s barge by the addition of a counter stern and a brass funnel the 199 remains, today, the last surviving naval steam pinnace in operational use.

The Pilgrim Trust Student Conservator of the Year Award went to Cardiff University student Gemma McBader for her work on the investigation and conservation of a 19th Century African shield. Originally listed as a ‘Tuareg shield’, Gemma established it was not Tuareg but had been presented to the British diplomat, Sir James Rennell Rodd, by the Ethiopian Emperor Menelik II on the signing of the 1897 Anglo-Ethiopian Treaty. It was an impressive and complex project which has had a great impact on a small museum.

The judges were fulsome in their praise, especially those that involved teaching volunteers high standards of conservation and excellent community engagement.