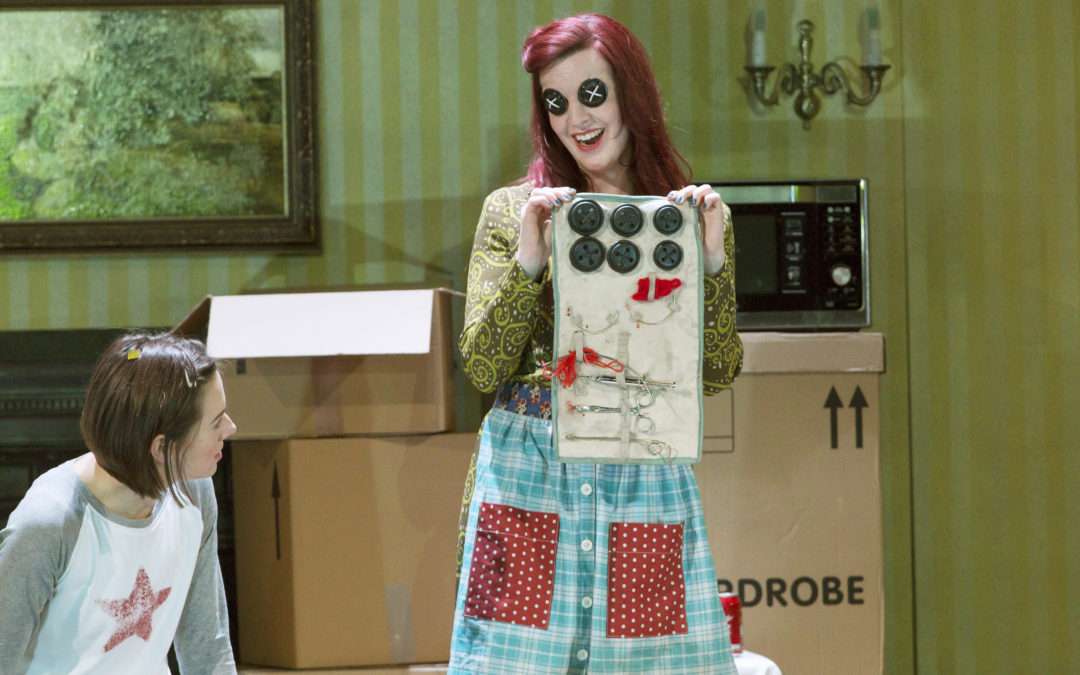 The first rule for successful opera composition is to choose a story involving characters that can be believable when they tell us about themselves, which of course is not the only reason they are there in the story. Opera is all about unbuttoning feelings that are hard (perhaps impossible) to express without music and song. It is fundamentally, and more clearly in this respect than film or even theatre, a confessional artform. Very few successful operas fail to exploit this so central quality.

Mark-Anthony Turnage’s fourth attempt at the genre (of which his first effort Greek, adapted from Steven Berkoff’s updated verse version of Oedipus, was his best) is plainly exploitative of the fame won by the Scientology-influenced Neil Gaiman’s calculating psychological kids’ tale Coraline. It is about a young school-girl in a hyped-up strange home situation slightly resembling C S Lewis’s first Narnia book. She goes through a magic door into a world just like home, except her other mum and dad here are threateningly different. But Rory Mullarkey’s text shows little grasp of how opera needs to work.

Kids love Coraline, also a film, but perhaps for other reasons. Gaiman has a laconic competence in his writing about the fantasy world he wants his readers to inhabit. His wild commercial success must mean it nourishes young readers. But nobody would suggest a masterpiece like Humperdinck’s Hansel and Gretel is just for kids. The opera Coraline, with the button-eyed Other Mother and Father awaiting the little girl in an identical but altered reality accessible through a door to no-somewhere, seems to lack both the necessary logic to come alive – and the music and confessional truthfulness to go with that.

Why is the girl’s world schizoid? Who is testing whom? Does it mean anything serious? Well not really. Neither the girl played by the adult Mary Bevan, nor the mother and father and their nasty alter egos played by Kitty Whately and Alexander Robin Baker achieve interesting believability – though, in Aletta Collins’ production with a pair of alternating matching room sets designed cleverly by Giles Cadle, the tale is neatly taken through its predictable processes.

Mullarkey’s libretto needed to find add-ons showing more operatic flair than loyalty to Gaiman’s original – which is really too thin and artificial a concept to go deeper than the cliches of life with which it seems perfectly satisfied. Its lesson is supposed to be in being brave though frightened. But children’s stories that really resonate are much closer to truthful issues that matter. Kids may be brave but it cannot and should not be expected of them: even in horrifying situations. Turnage’s carefully geared characteristically mixed music, diatonic enough for all tastes and never too robust or modernist, neither evokes the situation tellingly nor characterises effectively.

Coraline (not small enough for such a young being) is stuck at the centre of the action with no chance for self-revelation or developed understanding in song. The Humperdinck pays off musically with ravishing songs by kindly protectors – and Hansel’s heroic cooking of the witch is perfectly calculated for the comic denouement. Coraline is lame and flavourless, despite Sian Edwards’s decent conducting and nice supporting work from Harry Nicoll, Gillian Keith, Frances McCafferty and Dominic Sedgwick. To succeed it needed to get beyond its favourable parentage and make something of itself.