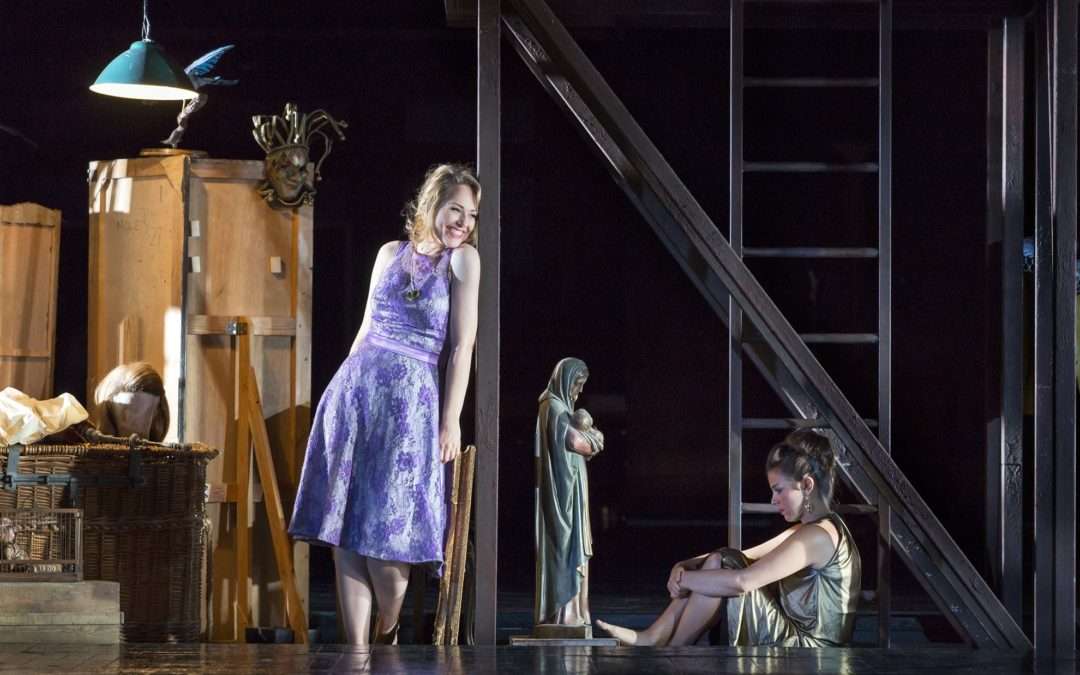 The music of Così is so sublime it’s a difficult show to ruin. However often a production flies in scenery during the most beautiful passages – I could have lived without the brightly-lit cinema frame descending from the heavens in the middle of ‘Soave sia il vento’ – Mozart transcends everything. In this new production, the Royal Opera House debut of the German director Jan Philipp Gloger, that’s just as well.

Two young couples arrive at the front of the stalls as the cast of an 18th-century opera (Così fan tutte?) take their curtain calls during the overture. One of that cast, our Don Alfonso, whisks the two boys up to the stage and makes a bet with them that he can prove their beloveds – selfie-snapping and hard-drinking girls – are unfaithful. Don Alfonso transforms into a movie director and the young people act, and act some more while scenes morph around them: a wartime farewell under a station clock, a bar in which the cynical Despina, devoid of morals and goodwill, shakes the cocktails, and a Garden of Eden with green plastic snake (aha: temptation! No, really?). As the stage-within-stage settings progress, you never know what’s real and what is just part of the act. But maybe everything is an act. All the world’s a stage. What is love? “Amor cos’è?” as Despina writes on her blackboard, in case we missed it.

Despite overworked gags, the staging has some fine moments, which make their impact when the genuine emotion seeps through the cracks of all the artifice. The sincerity of Ferrando’s ‘Un’aura amorosa’ shines bright. And in Fiordiligi’s ‘Per pietà’, when she berates herself for her faithless thoughts, mentally begging Guglielmo’s forgiveness, the man himself overhears as he sneaks in semi-clad to collect his clothes, fresh from his tryst with her sister.

Gloger’s is the first in a night of Royal Opera debuts. Both sisters are newcomers to the house: the American soprano Corinne Winters, introduced to London by ENO, has been justifiably snapped up, and makes a stylish Fiordiligi with strong, pure tone and excellent control of the leaps and plunges of the challenging vocal lines. Dorabella is the American mezzo Angela Brower, her voice flexible and colourful, her character convincingly sliding from innocent idealist towards cynical soubrette by way of easy infidelity. Dorabella is influenced by the hard-bitten Despina – expertly portrayed by Sabina Puértolas – to the point that she pinches her red wig.

The two men are less evenly cast. The German tenor Daniel Behle, also at Covent Garden for the first time, is a fine Ferrando, understanding the special magic of singing very quietly, convincing as can be when his heart is being ripped out. Alessio Arduini is a lively Guglielmo, though his livelier-still vibrato proved occasionally excessive.

The show really belonged to Johannes Martin Kränzle, character baritone par excellence, in the ultimate debut of the night: hard to believe he hasn’t sung here before, but better late than never. He inhabits the role masterfully and with an unfailing glint in the eye, a convincing ringmaster. He will be back later this season to sing Beckmesser in Die Meistersinger von Nürnberg – his ‘signature’ role. Grab a ticket by any means.

In the pit, the conductor Semyon Bychkov was far from the late romantic territory with which he is more often associated. Liking his Mozart may not be a mainstream attitude, but to me, despite tempi distinctly slower than is usual nowadays, it was a massive relief to hear Mozart accorded a straightforward and luxuriant performance in which slow numbers were allowed time to sink in; there were no “period-style” affectations to intrude on honest, eloquent phrasing or rapt atmospheres. Instead (despite someone having an off-night in the brass) we could enjoy some truly gorgeous playing from the woodwind – the clarinet writing in Così is to die for – along with cushioned strings and fine balance. If the pace dragged, that was as much the responsibility of continuity on stage, where the sheer busyness needs to tighten up a little. I’d love to see it later in the run, once it has settled in.

Extra points for the words COSÌ FAN TUTTI that appear over the wedding scene in bright lights. Tutti, not tutte. Thus do not only all women, but all men too.