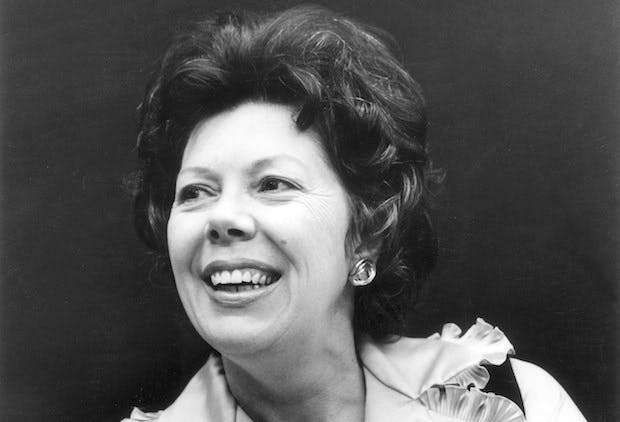 One of the greatest living stars of British classical music, the mezzo-soprano Dame Janet Baker CH DBE, was voted the winner of the 2019 Critics’ Circle Rosebowl by the 500 members of the Circle. Regrettably both the announcement and the award have been delayed by the Covid-19 pandemic, but we hope to resume normal service as soon as possible and to give the Rosebowl to Dame Janet at the traditional lunch, when that becomes feasible.

Janet Baker was born in 1933 in Yorkshire, and made her professional opera debut in 1956. She retired from the opera stage in 1982, continuing to sing professionally until 1989.

In Ivan Hewett’s words, in the Daily Telegraph:

“Whenever connoisseurs of the voice make their lists of ‘the 10 greatest singers of the 20th century’, there are always certain artists they can’t agree on. For some, Renata Tebaldi was too histrionic; for others, Jussi Björling lacked evenness of tone.

Even with the legendary Maria Callas, there are dissenters, with some saying she was a great artist who lacked the technical equipment to make the best use of her gifts.

However, there’s one singer who brooks no argument, has no doubters and features on everyone’s list. She is Dame Janet Baker…

The essence of Janet Baker’s appeal is the utterly personal quality of her voice, which thrills one to the marrow. Once heard, it’s never forgotten. Like Aretha Franklin or Billie Holiday or Hans Hotter, Dame Janet’s voice completely embodies its possessor, in a way that transcends genre and style. Her biography could be told in one sentence: she discovered her gift, worked hard to perfect it, sang a few carefully chosen roles and gave wonderful song recitals, travelled relatively little, and retired at the top of her game in 1989, aged only 56.”

Janet Baker came second in the very first Kathleen Ferrier Memorial Competition in 1956, and it is impossible not to see these remarkable blest pair of sirens as a particular unusual manifestation of our musical island story. Of course Ferrier’s career was extraordinarily short, and unusual. She did not start singing seriously until after she was 25. Her first London concert was in 1942, at the National Gallery after Christmas, and in 1953 a few months after the Coronation she was dead, from breast cancer.

Baker did much more opera than Ferrier, and I think, if one takes account of all the Handel she did on stage, and her early baroque music, possessed a far wider theatrical range than Ferrier (who I never saw on stage). I will never forget Baker’s memorable comic touches (as Jove pretending to be Diana) in Peter Hall’s fabulously brilliant and diverting Glyndebourne 1970 production of Cavalli’s La Calisto. And Baker as Julius Caesar at English National Opera was wonderful in a theatrical career easily twice as long as Ferrier’s. Long but actually Baker could have stuck at it longer – and I regret that she did not go on – and on (even).

Janet Baker’s voice was a beautifully coloured and immaculately poised tool. Baker made her opera debut in 1956 three years after Ferrier died. But she was only 49 when she retired on July 17, 1982 after singing Orfeo in the Gluck. It was for personal reasons because her husband was not well. And she had sung many opera roles, in Richard Strauss, Massenet, Walton and Britten as well as her long service to Handel. But the career could easily and valuably have been a decade or more longer. So it was sad to lose her from the opera house, and it is great to be awarding her our prize nearly four decades later. In her “fach” she was absolutely outstanding.