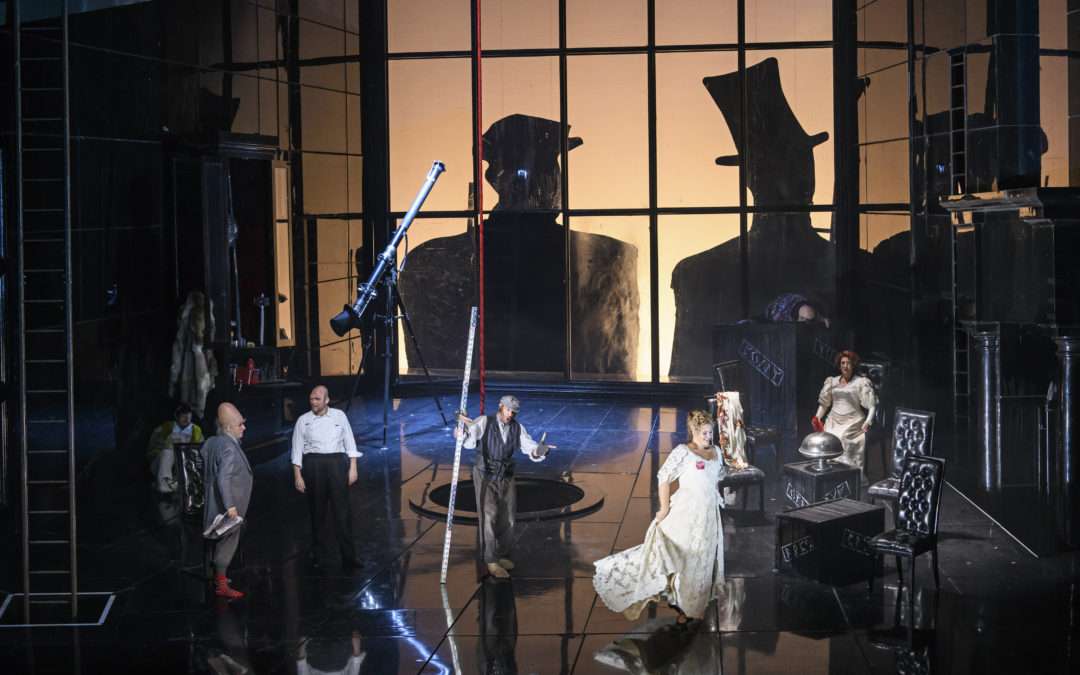 It'll cost you: Fasolt and Fafner present the bill

Broken promises and uneasy alliances, cunning plans and cynical solutions, a played-out regime clinging to power while rivals snap hungrily at their heels: no wonder the Ring Cycle is the only time you ever see British politicians at the opera. Presumably they can expense it as a research trip.

Conceived long before Brexit was even a glint in David Cameron’s eye, and mercifully free from topical references, Keith Warner’s Ring (returning here for its third revival) is still working its regime-toppling magic. More than 10 years on, the steampunk Edwardian setting – corsets, puffed sleeves and patriarchs meet futuristic onyx interiors and mad scientists – still looks handsome, and the sense of a world on the brink of change is no less keen.

Fasolt and Fafner become the grubby-fingered industrialists whose labour threatens Wotan’s aristocratic fiefdom, lusting after pretty daughter-of-the-house Freia, Mime and Alberich the scientific innovators who will eventually transform inadmissible experiments into mainstream realities (a small model of an aeroplane takes pride of place in their ominously wipe-clean Nibelheim laboratory).

But it’s Loge, not Wotan, who is master of ceremonies in Wagner’s “preliminary evening” of opera, and so familial wranglings and power-struggles come dressed up in the spangly leotard of illusion and sorcery. The tricks are good ones – Loge’s own explosive arrival, the levitating platform home of the gods that rises to reveal Nibelheim beneath, the video design and puppetry that give us Alberich’s largest and tiniest Tarnhelm-metamorphoses, the rolling waters of the Rhine at the start – though it’s hard not to wonder what today’s technology would make of the same visual challenges.

The chief attraction of this revival though is its cast – many of them making role or house debuts. Johannes Martin Kranzle’s Alberich is everything his 2017 Beckmesser suggested it might be – carefully characterised, a sympathetic portrait of obsession and neurosis, of thwarted ambition and desire. Gunther Groissbock’s Fasolt and Brindley Sherratt’s Fafner, though cartoonish in appearance, find the same subtlety, opening up unexpected possibilities in their dealings with Lise Davidsen’s unusually flirtatious Freia.

Davidsen’s soprano is a voice in full spate; at the lightest of pressures it gushes out sound whose force is more than matched by beauty of tone. As she makes her Royal Opera debut here in three small roles (she’ll also appear as Ortlinde and Third Norn later in the cycle), it’s to be hoped that the company has something bigger lined up for a thrilling talent still very much under construction.

Sarah Connolly’s Fricka is the matriarch with the mostest – authoritative but never cold in her delivery, and quite the power behind the spear, one suspects, in her marriage to John Lundgren’s Wotan. Lundgren himself is probably the biggest dramatic shift from previous outings. Lacking the immediate authority of Terfel, his is a more ambiguous Wotan, living us much by his wits as by brute force. Though audibly spent by the end of the evening, there was a mahogany warmth and gloss to the start that made for wonderful counterpoint with the acidity of Alan Oke’s Loge. It’ll be interesting to hear how he progresses through the cycle.

Antonio Pappano conducts a swift, fluent account of the score, sensitive to his singers and generous with the spotlight. Just occasionally, though, I yearned for something just a bit less smooth, for the waters of the Rhine to rise, threatening rather than supporting the onstage action. But the cycle has barely begun, and there’s time enough yet for orchestral tempests.