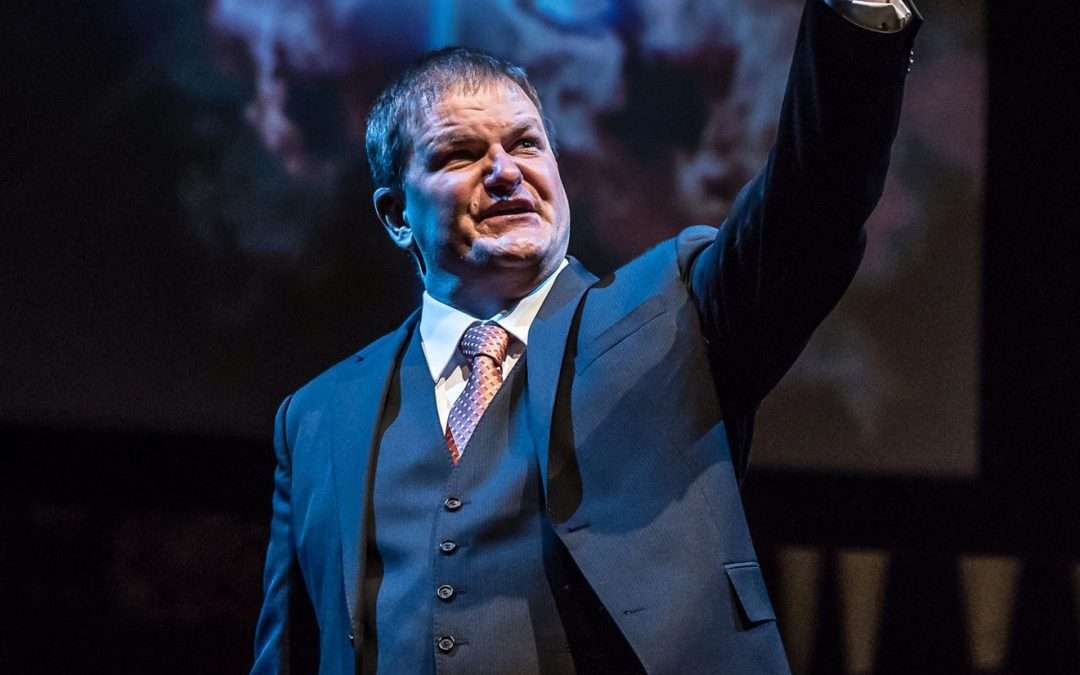 Circles of the mind

I imagine everyone agrees that Rhinegold should start in the dark – that chthonic rumble and the arpeggios that emerge from it, the beginning of the world, kind of demand it. But you can’t really do that on a concert stage; and that was about the only scenic drawback to the first instalment of Opera North’s Ring cycle at the Festival Hall. Luckily, we are equipped with eyes which can be closed at will, which also does the trick.

Thereafter, there was nothing but extreme pleasure to be got from having Richard Farnes’s orchestra on stage. This band has played so much together under Farnes’s quietly brilliant direction (and before – it’s reassuringly full of old-timers), you feel there is nothing they cannot do. Now, nearing the end of a Ring journey (there is one more cycle in Gateshead) that has seen them perform it rather more times than usual, they have reached an amazing solidity and assurance. More than that: Farnes’s conducting proves you can be passionate, inspired, brilliant without being in the least flashy, and the orchestra responds to everything he wants, finding the nuances, the light and shade, the radiance, shimmer, song and blast of Wagner’s score with all the varied delicacy and power you could want. Having this terrific team freed from the pit is nothing but good. We hear things we never heard before – not least a fabulous viola section that makes some of Wagner’s most trenchant comments. But Farnes knows why Wagner wanted them buried down there, and never draws attention to effects that are intended to be almost subconscious in their action on our ears. It’s a brilliant balancing act, fabulously well done, and he conducts with a physical restraint that never draws attention to himself.

It’s a commonplace to say that a semi-staging like Peter Mumford’s allows the words and music to speak for themselves, but it’s precisely this immediacy that is the performance’s greatest quality. Mumford is a distinguished lighting designer who trained as a stage director with Ralph Koltai, and he shows a sure and light touch with the singers here, whose prop-free miming and interaction is nearly all a matter of glances and body-language. They are dressed in socially-distinguishing clobber: gods in posh Victorian togs, giants in black suits, déclassé Loge somewhere in between with a 3-piece, Alberich appropriately all-black. But within his trammels Mumford gets quite enough characterisation to keep us going, strikingly with Wolfgang Abinger-Sperrhacke’s cynical, wired conman Loge and Jo Pohlheim as Alberich, whose transformation from rather friendly if over-eager sex-pest in the Rhine to full-on Nazi is a very well-signalled comment on the fragility of the psyche, the ease with which rejection and rancour lead to appalling consequences.

This kind of staging often makes you wonder why people bother with the vanities of directors. (True, it usually only takes a really well-directed show to remind you.) There is quite enough drama generated by orchestra and singers for anyone’s taste here, and no place to hide or finesse the character-failings of Wagner’s dram pers. Sure, the triptych of screens above the stage – with slow-running images of fire, water, clouds, and superimposed lines of dialogue and sometimes rather Jackanory storytelling – have on the whole not much to add, but they have their moments.

Though the seductive, shimmery pomposity of Valhalla sounds gorgeous, its loveliness is severely mitigated by Wotan’s stupid venality, and Michael Druiett incarnates the bullying, overweening fellow with very little sympathy. I liked Yvonne Howard’s cowed but proud and still hopeful Fricka; Giselle Allen was a forceful, desperate Freia, James Cresswell the lyrical Fasolt, Mats Almgren a marvellously cavernous dragon-in-waiting as Fafner. The Rhinemaidens were clear, fresh, uncurdled. Only Ceri Williams’s rather harsh Erda was at odds with the trancey tone of music that carries real intimations of the infinite.

The centre of the performance was Alberich’s manifesto and curse – properly chilling and with a great totalitarian power, ‘Hab acht!’ onwards a real frisson of determined, clear-eyed evil (and highly perceptive in its analysis of Wotan’s role in creating it). This looks like being an unflinching view of how “happiness” in the awful world of the Ring always depends on someone else’s sadness, exploitation, destruction. And Farnes’s marvels of pacing, the glorious tones of strings and brass, the carefully understated delicacy of the silvery harps bringing their aura to Valhalla as it emerges from the mist – it all promises as much as any Ring I’ve heard.

We’ve got used to explosive starts to the explosive first act of The Valkyrie, so Richard Farnes’s measured opening won’t have been to all tastes. But this performance, while in no way small-scale, is about little details within overarching shapes, and of course it turned out there was a purpose: the first act was a thing of real varied beauty, perfectly framing the emergence of the Ring’s Big Issue: how human love can cure a pitiless, ruined world. This can get buried in the welter of more indulgently passionate performances. Here, it was gorgeously clear and plain, Lee Bisset (Sieglinde) and Michael Weinius (Siegmund) constructing the Ring’s first proper human relationship before our eyes.

This opera (as has been often remarked) marks the high point of Wagner’s leitmotiv system, and the depth and resonance of the orchestral commentary is at its peak here, the narrations and conversations underpinned by a sober, pregnant, resonant bedrock of reminiscence, authorial omniscience, prophecy, subconscious stirrings… This all worked really well, with Bisset and Weinius solid, authoritative, almost unaware of the growing tenderness the orchestra began to hint at. Bisset in particular has a kind of simmering passion, a depth of character accomplished by the subtlest nuances of eyes and expression, and the more stolid Weinius was hardly less impressive, full of hurt but also a cussed human spirit. The last duet of the act, when passion finally flares uncontrollably up, was terrific, not least when Weinius launched into the tenderest mezza voce Spring Song over an orchestra rustling with erotic tension.

Robert Hayward is a pretty good vehicle for Wotan’s dawning self-awareness in Act 2, though a lot of his delivery was barky. There is a lot of interior action to convey and you can read  all the turmoil in Hayward’s face and body-language, which was never overstated. From the moment Kelly Cae Hogan’s splendid, adoring Brünnhilde bounded onstage to greet him with whoops of joy, this weird and brilliantly complicated relationship was completely gripping. The Valkyries, after all, are conceived as part of an appalling plan on Wotan’s part, mere slaves to a crazed purpose like Siegmund as well, and the drama of this act and the next is this obvious fact’s struggle to reach the conscious part of Wotan’s brain – the dawning of imaginative sympathy and genuine human status, in fact. As in The Marriage of Figaro, it’s the serfs who teach the aristos how to be human: initially Siegmund, rejecting Brünnhilde’s kind offer of hero’s death with extras, and then her in turn teaching her own father the meaning of love.

Again, this was all about shape, the episodes and conversations of Wotan, Fricka (Yvonne Howard, her growing glee at her revenge on her husband very well done), Brünnhilde and Siegmund completing a great trilogy before the final catastrophe. The last in particular was full of a really anxious tension as Brünnhilde confronted unhappy Siegmund with news of his forthcoming death. Surely this is the scene where the point of the Ring is most powerfully made, as Siegmund realises the full hopeless horror of the world and rebels against its loveless emptiness so splendidly. Hogan and Weinius produced something really special against a dignified, hushed backdrop of brass and timpani – sad, triumphant, gravid with dawning consciousness.

The boisterous bevy of Valkyries stormed into Act 3, sounding great in the ensemble against that swooping orchestra in a way they hardly ever do. Wotan’s approach was genuinely full of terror, and the long scene of anguished negotiation between father and daughter very intense and as tactical as a chess game, leading to the most vivid sense of relief as Brünnhilde finally finds Wotan the excuse he needs to soften his sentence. And thence to the radiant end, in a world where love and redemption is finally a possibility, Wotan realises (nearly) that it is he and his abuse of power and family and people that has ruined the world. Loge’s flickering, deceiving flames leapt up around Brünnhilde’s rock. Now what? I can’t wait to find out….